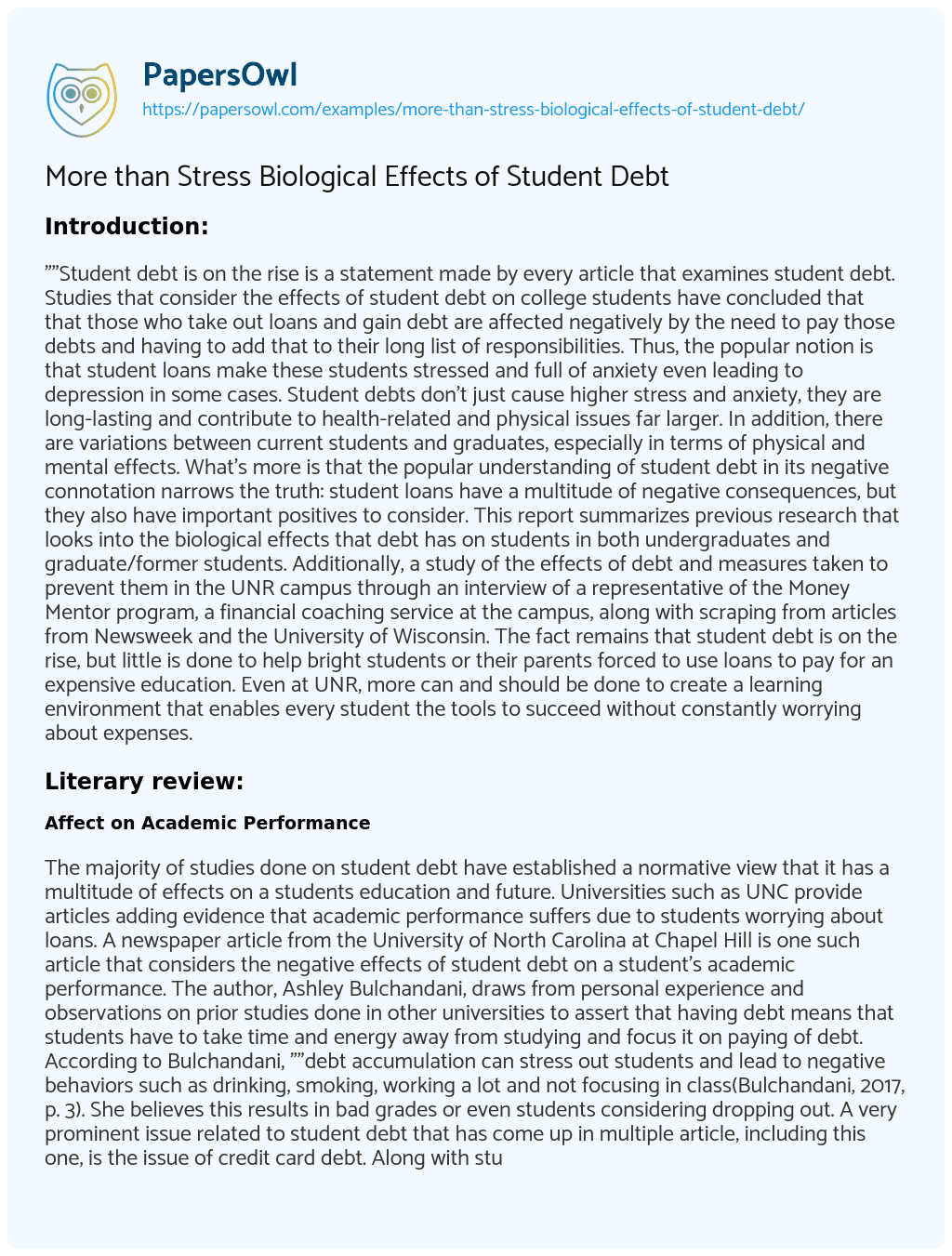 “”Student debt is on the rise is a statement made by every article that examines student debt. Studies that consider the effects of student debt on college students have concluded that that those who take out loans and gain debt are affected negatively by the need to pay those debts and having to add that to their long list of responsibilities. Thus, the popular notion is that student loans make these students stressed and full of anxiety even leading to depression in some cases. Student debts don’t just cause higher stress and anxiety, they are long-lasting and contribute to health-related and physical issues far larger. In addition, there are variations between current students and graduates, especially in terms of physical and mental effects. What’s more is that the popular understanding of student debt in its negative connotation narrows the truth: student loans have a multitude of negative consequences, but they also have important positives to consider. This report summarizes previous research that looks into the biological effects that debt has on students in both undergraduates and graduate/former students. Additionally, a study of the effects of debt and measures taken to prevent them in the UNR campus through an interview of a representative of the Money Mentor program, a financial coaching service at the campus, along with scraping from articles from Newsweek and the University of Wisconsin. The fact remains that student debt is on the rise, but little is done to help bright students or their parents forced to use loans to pay for an expensive education. Even at UNR, more can and should be done to create a learning environment that enables every student the tools to succeed without constantly worrying about expenses.

The majority of studies done on student debt have established a normative view that it has a multitude of effects on a students education and future. Universities such as UNC provide articles adding evidence that academic performance suffers due to students worrying about loans. A newspaper article from the University of North Carolina at Chapel Hill is one such article that considers the negative effects of student debt on a student’s academic performance. The author, Ashley Bulchandani, draws from personal experience and observations on prior studies done in other universities to assert that having debt means that students have to take time and energy away from studying and focus it on paying of debt. According to Bulchandani, “”debt accumulation can stress out students and lead to negative behaviors such as drinking, smoking, working a lot and not focusing in class(Bulchandani, 2017, p. 3). She believes this results in bad grades or even students considering dropping out. A very prominent issue related to student debt that has come up in multiple article, including this one, is the issue of credit card debt. Along with student loans, credit card debt creates a situation in which students have to work even more to pay of a larger amount of debt furthering the downward spiral to low GPAs and grades (Bulchandani, 2017, p. 3).

Other studies provide an outlook on the other side of the spectrum. A scholarly article from the Research in Higher Education journal also considers the mental and physical effects of student debt on a students education drawing on prior studies and research done by Princeton University. As with almost all the other articles, this article also studied the negative effects that student debt can have on a students mental state going as far as showing how students began to exhibit bad behavior as a result of the stress of student debt. Interestingly, the study explains that social standing and a students perceived identity creates variations in the response to student debt by the students. According to co-authors Mesmin Destin and Ryan Svoboda, “”When students are reminded of their own deeply held future identities or focused on broader goals for success and well-being, financial costs become less detrimental and students become more likely to reap the benefits of an investment in education, regardless of their socioeconomic background (Destin & Svoboda, 2018, p. 62).

6 Katrina Walsemann et al consider the mental effects of student debt on a students education. The evidence used for thier research comes from prior studies done by experts such as the Department of Education. As with almost all the other articles, this article also sees the negative effects that student debt can have on a students mental state going as far as to show how students began to exhibit bad behavior as a result of the stress of student debt.

The Journal of Further and Higher Education had an article that explored the relationship between student mental health and student debt as it relates to undergraduate students. The evidence provided in this study was produced by questionnaires from a UK study called UNIQoLL. The study concluded that student debt does not majorly affect a student’s well- being, but it is the student’s perception of their financial situation that affects their mental health ( Cooke, Barkham, Audin, Bradley, & Davy, 2004, p. 25). Another article from Johns Hopkins University Press addresses the relationship between student debt of STEM baccalaureates and graduate school attendance as it relates to undergraduates. The evidence used in this article includes reviews of prior studies and from the 2003 National Survey of Recent College Graduates (NSRCG). As with other articles, this article also explores the negative aspects of student debt. As reported by the article from The Review of Higher Education, borrowing reduces the chances of attending graduate school for the majority of Black, Asian, Latino, and White STEM undergraduates(Malcom & Dowd, 2012, p. 62). Furthermore post-baccalaureate enrollment declines (except for Asian and African American students) as the relative debt level increases (Malcom & Dowd, 2012, p. 62).

Grads and their future

Michelle Singletary (2016), through an article from the Washington Post, examines the mental effects of student debt on people after undergraduate and graduate. The evidence used in this study include studies from The Journal of Happiness and College Board. As with a majority of articles addressing this issue, this article also states that student debt is felt largely after even graduate school as graduates must continue to pay of debt. What’s more is that the amount of college debt that actually affect people’s sense of well-being paying off student debt isn’t as much a psychological cost as it is a financial burden. The Journal of Happiness drew from a pool of participants that included “”2,781 college graduates who have been paying off college loan debt for at least seven years. (Singletary, 2016, p. 9). The take away from this is that student debt builds up and affects the mental state of these graduates as they continue to pay off loans instead of buying a house or some other investment. Another article, from Education Economics, examines the decisions affected by student debt in bachelor degree recipients. The evidence provided is mainly from the Department of Education’s “”Baccalaureate and Beyond study. The article follows a popular finding that student debt causes changes in decisions on career choice and future investments. Lei Zhang, the researcher behind the study, explains that students with higher debt choose degrees with higher earning rather than public interest jobs such as teaching (Zhang, 2011, p. 42). Quite obviously one can assert that high debt would push students to look for jobs that will repay these debts quickly which is a positive effect of debt in regards of a student’s motivation for success and degree-achievement. However, this also means that a larger portion of students will forgo teaching and other occupations that serve the community as a whole, creating disparities in the education system that could further affect college tuition and attendance. As for a graduate’s future, Zhang believes that college debt prevents individuals from being able to marry and thus buying homes, as individuals usually buy homes as a result of marriage (Zhang, 2011, p. 44). Clearly, student debt hinders graduates from going on with their lives and they are stuck paying of debt which begins to wear on their mental state leading to depression and constant worry over their finances.

The Stress of College Students with Financial Debt

Essential Oils and their Effects on Perceived Stress Level