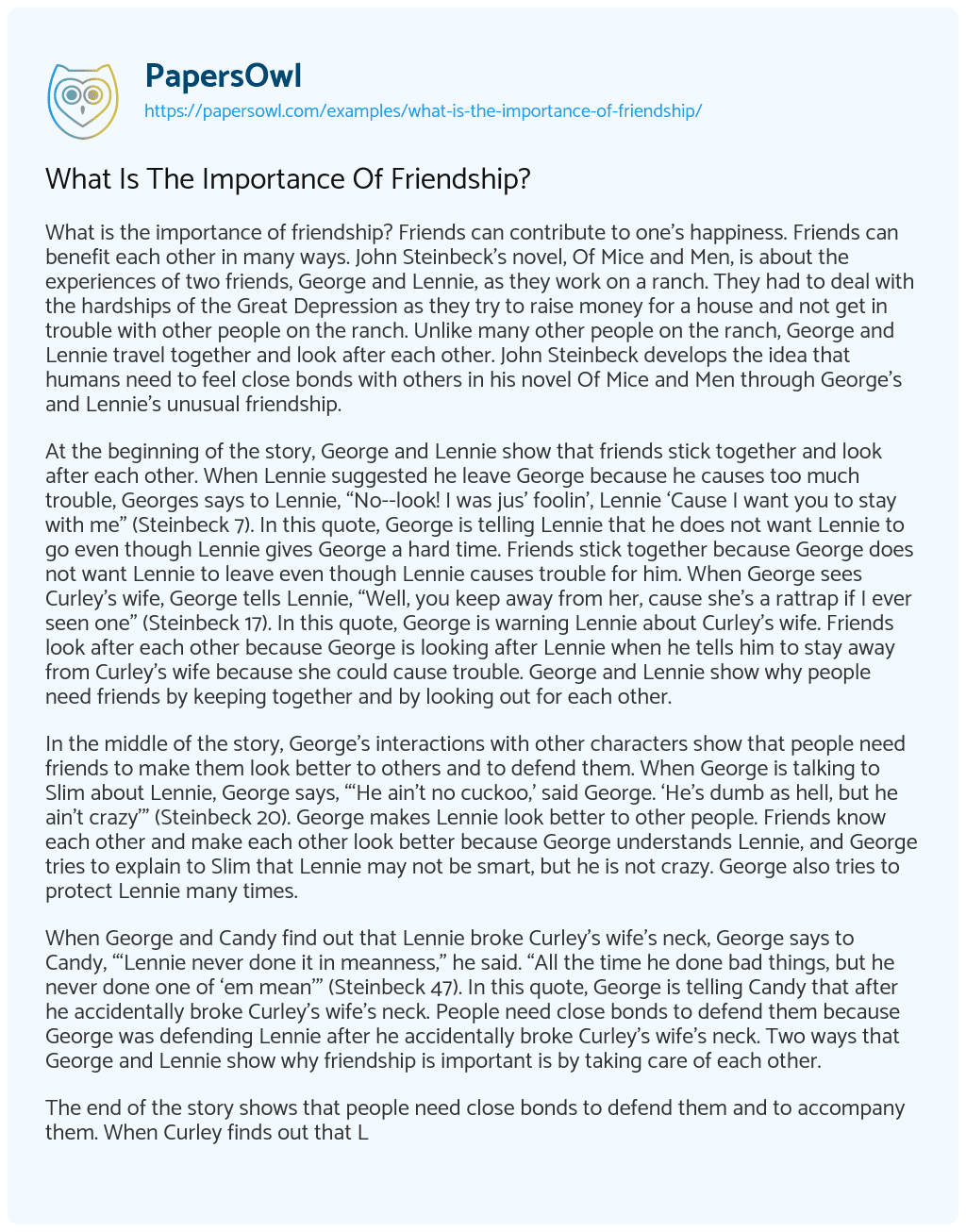 What is the importance of friendship? Friends can contribute to one’s happiness. Friends can benefit each other in many ways. John Steinbeck’s novel, Of Mice and Men, is about the experiences of two friends, George and Lennie, as they work on a ranch. They had to deal with the hardships of the Great Depression as they try to raise money for a house and not get in trouble with other people on the ranch. Unlike many other people on the ranch, George and Lennie travel together and look after each other. John Steinbeck develops the idea that humans need to feel close bonds with others in his novel Of Mice and Men through George’s and Lennie’s unusual friendship.

At the beginning of the story, George and Lennie show that friends stick together and look after each other. When Lennie suggested he leave George because he causes too much trouble, Georges says to Lennie, “No–look! I was jus’ foolin’, Lennie ‘Cause I want you to stay with me” (Steinbeck 7). In this quote, George is telling Lennie that he does not want Lennie to go even though Lennie gives George a hard time. Friends stick together because George does not want Lennie to leave even though Lennie causes trouble for him. When George sees Curley’s wife, George tells Lennie, “Well, you keep away from her, cause she’s a rattrap if I ever seen one” (Steinbeck 17). In this quote, George is warning Lennie about Curley’s wife. Friends look after each other because George is looking after Lennie when he tells him to stay away from Curley’s wife because she could cause trouble. George and Lennie show why people need friends by keeping together and by looking out for each other.

In the middle of the story, George’s interactions with other characters show that people need friends to make them look better to others and to defend them. When George is talking to Slim about Lennie, George says, “‘He ain’t no cuckoo,’ said George. ‘He’s dumb as hell, but he ain’t crazy’” (Steinbeck 20). George makes Lennie look better to other people. Friends know each other and make each other look better because George understands Lennie, and George tries to explain to Slim that Lennie may not be smart, but he is not crazy. George also tries to protect Lennie many times.

The end of the story shows that people need close bonds to defend them and to accompany them. When Curley finds out that Lennie broke his wife’s neck, George says to Curley, “‘But listen, Curley. The poor bastard’s nuts. Don’t shoot ‘im. He di’n’t know what he was doin’’” (Steinbeck 48). In this quote, George is telling Curley not to shoot Lennie because Lennie did not mean to break Curley’s wife’s neck. People need close bonds to defend them because George was trying to save Lennie from being shot.

In chapter 6, when George is getting ready to shoot Lennie, Steinbeck states, “He pulled the trigger. The crash of the shot rolled up the hills and rolled down again. Lennie jarred, and then settled slowly forward to the sand, and he lay without quivering” (Steinbeck 52). Geroge is shooting Lennie because he knew that Curley was coming to shoot Lennie in a more painful way. Friends help each other get through tough times because George helps Lennie avoid future suffering by shooting Lennie in a way that Lennie won’t feel it. George and Lennie show that people need close bonds to help each other.

Through Lennie’s and George’s experiences as unusual friends, John Steinbeck shows that people need to feel close bonds with others (friends) in his novel Of Mice and Men. What John Steinbeck is showing in this novel is that everyone needs a friend to help them through tough times, look out for them, and to share his or her dreams with.

What Is The Importance Of Friendship?. (2019, Sep 10). Retrieved from https://papersowl.com/examples/what-is-the-importance-of-friendship/