How Humans and Nature Change Earth 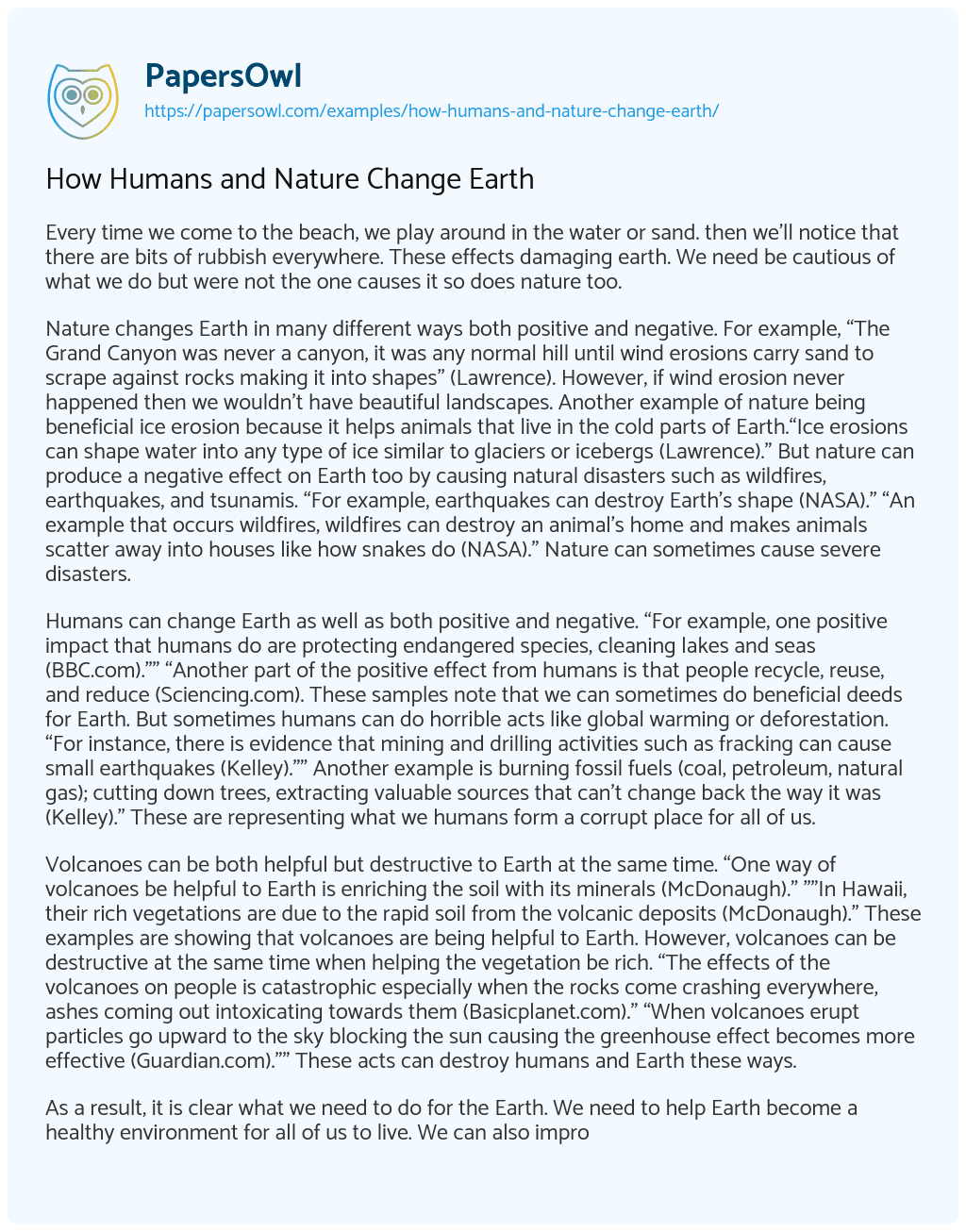 Every time we come to the beach, we play around in the water or sand. then we’ll notice that there are bits of rubbish everywhere. These effects damaging earth. We need be cautious of what we do but were not the one causes it so does nature too.

Nature changes Earth in many different ways both positive and negative. For example, “The Grand Canyon was never a canyon, it was any normal hill until wind erosions carry sand to scrape against rocks making it into shapes” (Lawrence). However, if wind erosion never happened then we wouldn’t have beautiful landscapes. Another example of nature being beneficial ice erosion because it helps animals that live in the cold parts of Earth.“Ice erosions can shape water into any type of ice similar to glaciers or icebergs (Lawrence).” But nature can produce a negative effect on Earth too by causing natural disasters such as wildfires, earthquakes, and tsunamis. “For example, earthquakes can destroy Earth’s shape (NASA).” “An example that occurs wildfires, wildfires can destroy an animal’s home and makes animals scatter away into houses like how snakes do (NASA).” Nature can sometimes cause severe disasters.

Humans can change Earth as well as both positive and negative. “For example, one positive impact that humans do are protecting endangered species, cleaning lakes and seas (BBC.com).”” “Another part of the positive effect from humans is that people recycle, reuse, and reduce (Sciencing.com). These samples note that we can sometimes do beneficial deeds for Earth. But sometimes humans can do horrible acts like global warming or deforestation. “For instance, there is evidence that mining and drilling activities such as fracking can cause small earthquakes (Kelley).”” Another example is burning fossil fuels (coal, petroleum, natural gas); cutting down trees, extracting valuable sources that can’t change back the way it was (Kelley).” These are representing what we humans form a corrupt place for all of us.

Volcanoes can be both helpful but destructive to Earth at the same time. “One way of volcanoes be helpful to Earth is enriching the soil with its minerals (McDonaugh).” “”In Hawaii, their rich vegetations are due to the rapid soil from the volcanic deposits (McDonaugh).” These examples are showing that volcanoes are being helpful to Earth. However, volcanoes can be destructive at the same time when helping the vegetation be rich. “The effects of the volcanoes on people is catastrophic especially when the rocks come crashing everywhere, ashes coming out intoxicating towards them (Basicplanet.com).” “When volcanoes erupt particles go upward to the sky blocking the sun causing the greenhouse effect becomes more effective (Guardian.com).”” These acts can destroy humans and Earth these ways.

As a result, it is clear what we need to do for the Earth. We need to help Earth become a healthy environment for all of us to live. We can also improve the environment by reducing recycling or reusing. Or protest to companies that affect the earth. Another way to support earth is to think what would make a difference if you did something for the world. For instance, you can protest or use old food as a mulch for your plants to grow well.

How Humans and Nature Change Earth. (2019, Aug 13). Retrieved from https://papersowl.com/examples/how-humans-and-nature-change-earth/

Tobacco Products the Harm to Humans and Nature

Relationship between Humans and Animals