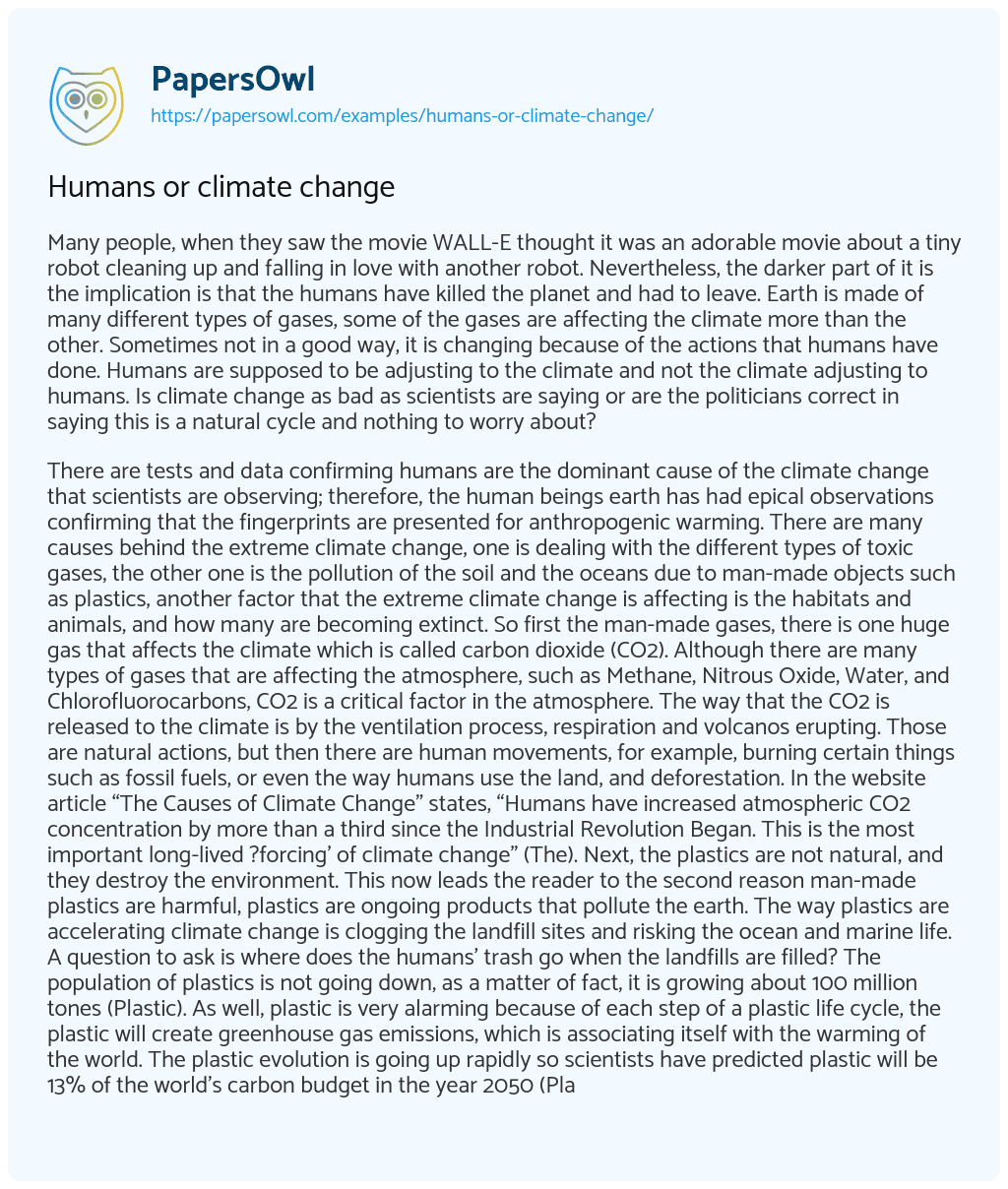 Many people, when they saw the movie WALL-E thought it was an adorable movie about a tiny robot cleaning up and falling in love with another robot. Nevertheless, the darker part of it is the implication is that the humans have killed the planet and had to leave. Earth is made of many different types of gases, some of the gases are affecting the climate more than the other. Sometimes not in a good way, it is changing because of the actions that humans have done. Humans are supposed to be adjusting to the climate and not the climate adjusting to humans. Is climate change as bad as scientists are saying or are the politicians correct in saying this is a natural cycle and nothing to worry about?

There are tests and data confirming humans are the dominant cause of the climate change that scientists are observing; therefore, the human beings earth has had epical observations confirming that the fingerprints are presented for anthropogenic warming. There are many causes behind the extreme climate change, one is dealing with the different types of toxic gases, the other one is the pollution of the soil and the oceans due to man-made objects such as plastics, another factor that the extreme climate change is affecting is the habitats and animals, and how many are becoming extinct. So first the man-made gases, there is one huge gas that affects the climate which is called carbon dioxide (CO2). Although there are many types of gases that are affecting the atmosphere, such as Methane, Nitrous Oxide, Water, and Chlorofluorocarbons, CO2 is a critical factor in the atmosphere. The way that the CO2 is released to the climate is by the ventilation process, respiration and volcanos erupting. Those are natural actions, but then there are human movements, for example, burning certain things such as fossil fuels, or even the way humans use the land, and deforestation. In the website article “The Causes of Climate Change” states, “Humans have increased atmospheric CO2 concentration by more than a third since the Industrial Revolution Began. This is the most important long-lived ?forcing’ of climate change” (The). Next, the plastics are not natural, and they destroy the environment. This now leads the reader to the second reason man-made plastics are harmful, plastics are ongoing products that pollute the earth. The way plastics are accelerating climate change is clogging the landfill sites and risking the ocean and marine life. A question to ask is where does the humans’ trash go when the landfills are filled? The population of plastics is not going down, as a matter of fact, it is growing about 100 million tones (Plastic). As well, plastic is very alarming because of each step of a plastic life cycle, the plastic will create greenhouse gas emissions, which is associating itself with the warming of the world. The plastic evolution is going up rapidly so scientists have predicted plastic will be 13% of the world’s carbon budget in the year 2050 (Plastic). This indicates what others are predicting what outcome the plastic product will create if humans do not do anything about the problem. Lastly, habitats, like humans, animals and habitats are fighting for survival because of climate change. There are many ways that the climate is affecting the animals’ living spaces, and the animals itself. For example the animals are encountering drought, heatwaves, the sea levels rising, melting glaciers and so much more. All of these destroy the animals’ homes. The U.S. Environmental protection agency has reported to the website article “Climate Change Poses Challenges to Plants and Animals” which states: “average temperatures in the U.S. have increased 0.14?F per decade, and worldwide, the decade from 2001 there no evidence of the world warming when the human activity first came, why did it state 2010 was the warmest on record since measurements began” (Cho). With this animals are approximately 20 to 30 percent, at risk for extinction, from the cause of global temperatures. The number of global temperatures reaches the projected level by the year 2100. To prevent this from happening the evolution process will be 10,000 times faster to reduce animal extinction and their habitats. However, if humans do not do something about this problem, the climate will continue to evolve and kill habitats one by one. There is living proof that human beings are the head reason for the long term climate change that the universe is experiencing at this moment. As well humans should start to be aware of what they do so they will no longer have to deal with such matters (New). Many scientists have collected data to show others that climate change is exhilarating the natural cycle of climate change so much that now it is mostly man-made and no longer just a natural cycle.

Skeptics believe that the climate change that is occurring is very minimal man-made and not potentially catastrophic. The skeptics are certain that this event in the universe is just a natural cycle and will end soon. The first reason why they feel this way is because the politicians are saying CO2 is not a pollutant but vital for plant life; greenhouse gases. Politicians are saying scientists have no actual evidence as if climate change is really man-made, then lastly they state that scientists are over predicting and humans should not believe the scientists’ word because they were wrong before with the tests that were taken. So first the CO2 is not a pollutant but is needed for plants. In other words, they are claiming CO2 is not as important as the humans make it to be. The humans are creating CO2 by their activities and with that, the scientists claim that since CO2 is a greenhouse gas which is affecting the climate change event. However, politicians are saying climate warming from the past has never been associated with CO2 changes. For example in the book Climate Changes by Lauri Friedman states, “The Antarctic ice cores show that after the last four Ice Ages, the temperatures warmed 800 years before the CO2 levels increased in the atmosphere. The warming produced more CO2 in the atmosphere, not the other way around” (Friedman). What this part in the article is saying is that CO2 was already in the world because of the atmosphere not because of the humans, in other words, it is with the world’s atmosphere and not the humans. So climate change is from the earth and it is not necessarily man-made. Then the politicians are claiming that there is no actual evidence of climate change, being man-made. The reasoning behind this is because there are data and records that show that the planet was occurring warming many years before human activity was recorded (Friedman). What the politicians are saying is that if the warming started before humans were on earth then, scientists can not claim that we are the reason right now for this event. Also, the author has an article with Dennis T. Avery and Avery states, “…contemporary warming periods might not be related to greenhouse gas emissions from human activity” (Friedman).What Avery is saying is that the warming may not be caused by the greenhouse gases that humans are creating. So that concludes that humans may not be affecting the climate change that is occurring because the warming is not affected nor related to the emissions. Lastly, scientists have always used their data, and hypothesis to prove something and say something. However most of the data that was received about climate change and from the data that was given they created solutions and hypotheses. The hypothesis that the scientists created was mostly wrong, and they were wrong not just about climate change but for other things as well, so the politicians are saying ?why would you believe the scientists who were wrong multiple times.’ The scientists are just over predicting, and predicting the wrong information. According to Rick Perry, the U.S. energy secretary. Has stated in the article, “Analysis: Why scientists think 100% of global warming is due to humans” that, “to stand up and say 100% of global warming is because of human activity, I think on its face, is just indefensible” (Hausfather). Everyone has their own opinion about this topic, either you are a believer or skeptic.

This topic will forever live on into the future, however, the author believes that the climate change that is occurring today and what has been occurring is caused by humans. The first reason is that just because there is no past evidence that the earth was warming when humans first came, back then humans and this earth has evolved, and they got new machines and factories, then that leads the readers into the next reason since humans do not have those gases in their air and atmosphere it is affecting the climate, lastly, the affecting that will be happening that was mentioned earlier is already happening. That global warming has reached a global standard level of certainty. Alister Doyle has stated in the article, “only one-in-a-million chance global warming is not man-made, scientists say” has stated with confidence that human activities are raising the heat of Earth’s surface. Doyle’s statistics show that there is only a one-in-a-million chance that there would be no sign of warming (Doyle).

Climate change is a serious issue that should come to everyone’s attention and everyone should be aware of what is happening. Whether the reader believes that the cause is because of humans or it is just a natural cycle. This has been going on for decades now and no one found real answers or data, and no one is truly aware of what’s going on with their universe. So it is time to make a difference and take action so the human home will not be destroyed. Will humans stop global warming, no, probably not, but there is always the possibility to slow it down, which gives the people and their home more time. Time to figure out a solution, which is better than just sitting back and watching their earth become dust.