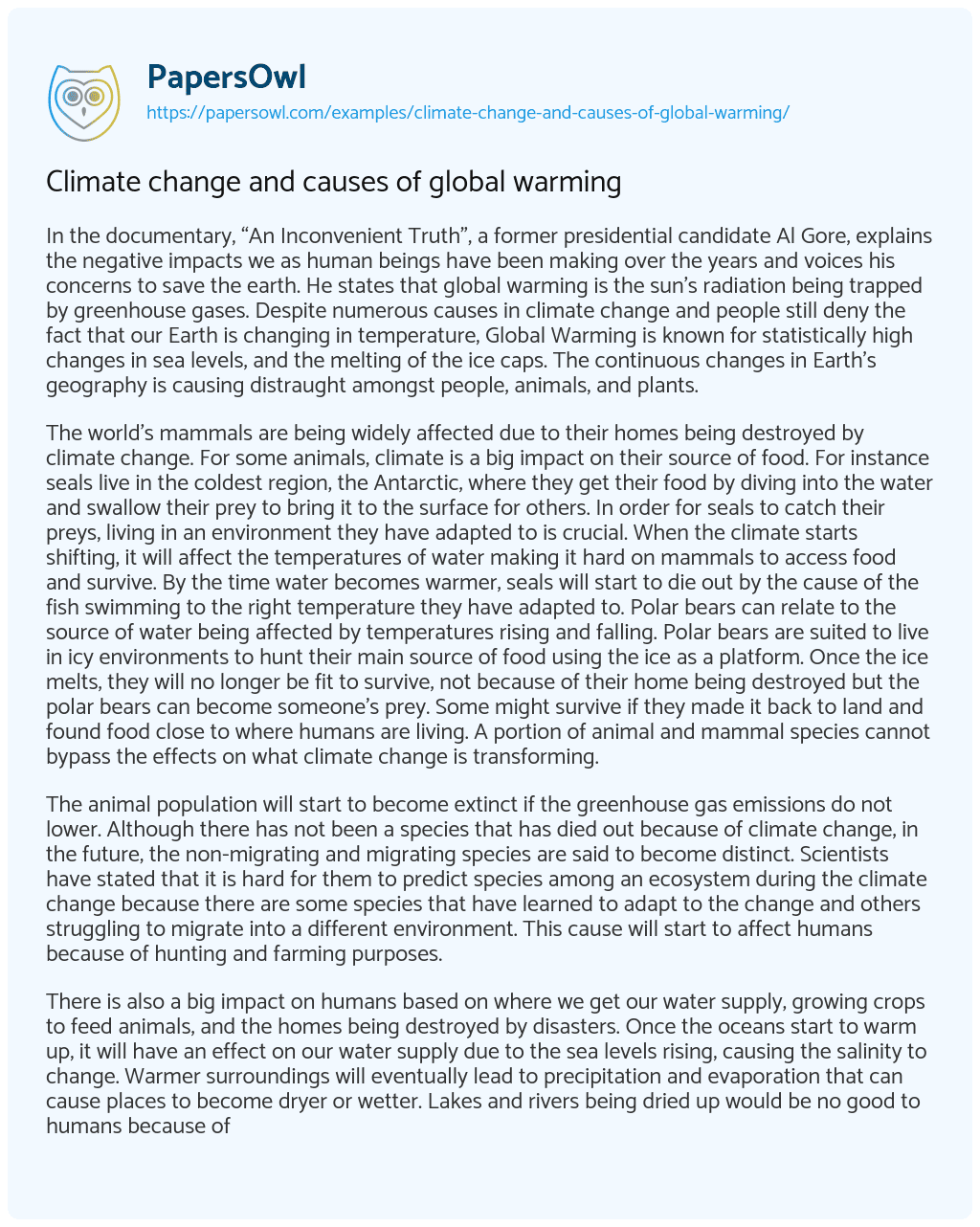 In the documentary, “An Inconvenient Truth”, a former presidential candidate Al Gore, explains the negative impacts we as human beings have been making over the years and voices his concerns to save the earth. He states that global warming is the sun’s radiation being trapped by greenhouse gases. Despite numerous causes in climate change and people still deny the fact that our Earth is changing in temperature, Global Warming is known for statistically high changes in sea levels, and the melting of the ice caps. The continuous changes in Earth’s geography is causing distraught amongst people, animals, and plants.

The world’s mammals are being widely affected due to their homes being destroyed by climate change. For some animals, climate is a big impact on their source of food. For instance seals live in the coldest region, the Antarctic, where they get their food by diving into the water and swallow their prey to bring it to the surface for others. In order for seals to catch their preys, living in an environment they have adapted to is crucial. When the climate starts shifting, it will affect the temperatures of water making it hard on mammals to access food and survive. By the time water becomes warmer, seals will start to die out by the cause of the fish swimming to the right temperature they have adapted to. Polar bears can relate to the source of water being affected by temperatures rising and falling. Polar bears are suited to live in icy environments to hunt their main source of food using the ice as a platform. Once the ice melts, they will no longer be fit to survive, not because of their home being destroyed but the polar bears can become someone’s prey. Some might survive if they made it back to land and found food close to where humans are living. A portion of animal and mammal species cannot bypass the effects on what climate change is transforming.

The animal population will start to become extinct if the greenhouse gas emissions do not lower. Although there has not been a species that has died out because of climate change, in the future, the non-migrating and migrating species are said to become distinct. Scientists have stated that it is hard for them to predict species among an ecosystem during the climate change because there are some species that have learned to adapt to the change and others struggling to migrate into a different environment. This cause will start to affect humans because of hunting and farming purposes.

There is also a big impact on humans based on where we get our water supply, growing crops to feed animals, and the homes being destroyed by disasters. Once the oceans start to warm up, it will have an effect on our water supply due to the sea levels rising, causing the salinity to change. Warmer surroundings will eventually lead to precipitation and evaporation that can cause places to become dryer or wetter. Lakes and rivers being dried up would be no good to humans because of the food source being caught or crops needing to be watered. Heat waves and droughts can cause homes and crops to be destroyed due to wildfires occurring. The health of humans have always been determined by the climate and weather.

Climate change can be a severe risk in human health. An increase in heat waves can cause various cruel health dangers that can potentially rise to heat stroke, heat exhaustion, and making already known medical conditions worse. In the spring and winter of 2012, a terrible outbreak of continuous heat wave caused the death of 123 people. Not only does climate change affect humans health but, it can also affect the economy dramatically. According to “Global Humanitarian Forum,” there was about 300,000 deaths in the year 2009 due to the droughts and flooding that had occurred and came out to $125 billion that the economy had lossed. Climate change will continuously affect the human society as long with their health in the near future.

The effects on plants due to climate change is important as well for cropping reasons and human survival. Warm weather is no good for some plants. Coral reefs tend to turn white when the oceans start to warm up which causes the reefs to die out. Once the crops dry up it will be no good for farmers as it can destroy farms that they used to grow on. Wildfires can cause large amounts of forests to die out which includes the trees that humans need to breathe. Climate change is predicted to stop or slow down the production of plant growth.

Climate change cannot only affect cropping and trees in need for human survival but can also stunt plant growth. According to the study “PLOS Biology,” there is about a 7% downfall in the standard number of freezing days will surprisingly help plants grow. The decline in the water availability can change soil conditions that makes it crucial for plants to grow. The downfall of plant growth will affect the environment for many species due to all the destroyed forests. Once the conditions start to get bad, forests can do the opposite of what it was originally doing. Forests can create carbon contrary to taking it away from the atmosphere. Climate change will determine how frequently plants grow.

After briefly going over the different effects of Global Warming and how our Earth’s climate will change through the next century, this topic will still be the main challenge of our society today. Despite Al Gore’s enthusiasm to take action for our mistakes to the planet, people continue to practice pollution. We began to see the outcomes of pollution through our decrease in food and shelter for some mammals, extinction, or the danger of extinction, rise in medical conditions, and plant growth. Will these problematic severities force people, animals, and plants to adapt?

Impacts of Co2 and Global Climate Change on Biodiversity