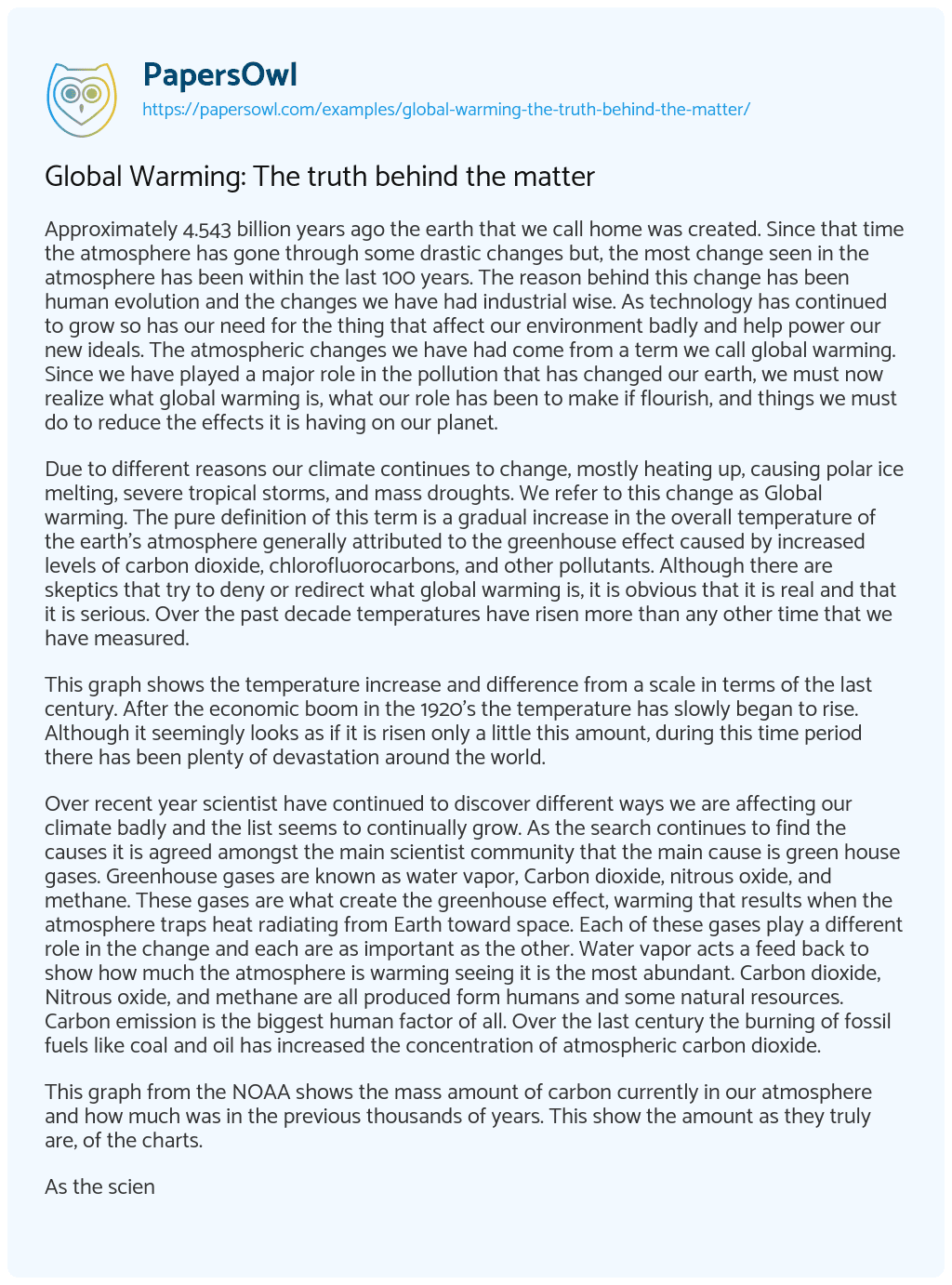 Approximately 4.543 billion years ago the earth that we call home was created. Since that time the atmosphere has gone through some drastic changes but, the most change seen in the atmosphere has been within the last 100 years. The reason behind this change has been human evolution and the changes we have had industrial wise. As technology has continued to grow so has our need for the thing that affect our environment badly and help power our new ideals. The atmospheric changes we have had come from a term we call global warming. Since we have played a major role in the pollution that has changed our earth, we must now realize what global warming is, what our role has been to make if flourish, and things we must do to reduce the effects it is having on our planet.

Due to different reasons our climate continues to change, mostly heating up, causing polar ice melting, severe tropical storms, and mass droughts. We refer to this change as Global warming. The pure definition of this term is a gradual increase in the overall temperature of the earth’s atmosphere generally attributed to the greenhouse effect caused by increased levels of carbon dioxide, chlorofluorocarbons, and other pollutants. Although there are skeptics that try to deny or redirect what global warming is, it is obvious that it is real and that it is serious. Over the past decade temperatures have risen more than any other time that we have measured.

This graph shows the temperature increase and difference from a scale in terms of the last century. After the economic boom in the 1920’s the temperature has slowly began to rise. Although it seemingly looks as if it is risen only a little this amount, during this time period there has been plenty of devastation around the world.

Over recent year scientist have continued to discover different ways we are affecting our climate badly and the list seems to continually grow. As the search continues to find the causes it is agreed amongst the main scientist community that the main cause is green house gases. Greenhouse gases are known as water vapor, Carbon dioxide, nitrous oxide, and methane. These gases are what create the greenhouse effect, warming that results when the atmosphere traps heat radiating from Earth toward space. Each of these gases play a different role in the change and each are as important as the other. Water vapor acts a feed back to show how much the atmosphere is warming seeing it is the most abundant. Carbon dioxide, Nitrous oxide, and methane are all produced form humans and some natural resources. Carbon emission is the biggest human factor of all. Over the last century the burning of fossil fuels like coal and oil has increased the concentration of atmospheric carbon dioxide.

This graph from the NOAA shows the mass amount of carbon currently in our atmosphere and how much was in the previous thousands of years. This show the amount as they truly are, of the charts.

As the science around global warming continues to grow it has become more obvious how much it contributes to natural disasters, and Wildfires has become on of the biggest destructive things that carbon emission has affected. With the continual rise of carbon emission our environment continues to heat up. Wildfires on the west coast of the United States have continued to become more frequent and dangerous since the late 1900’s and early 21st century. In the span between 1986 and 2003, wildfires happened almost four times as often, burned more than six times the land area, and lasted almost five times as long when compared to the period between 1970 and 1986.

As the graph above shows, the gradual increase in land being burned gives a key sign to the increase in its dangerousness and destructiveness. These rises are due to the effects of the greenhouse effect and will continue to rise. Rick Ochoa, fire weather program manager at the National Interagency Fire Center in Idaho, told MNN, ‘We still have a long way to go on prescribed burns, but I would say that while we are making improvements on that, in some regards global warming is outrunning our ability to do it.’

The overview of this research paper is to gain a greater understanding that global warming has been growing tremendously due to the greenhouse effect. Each time something on the planet releases carbon dioxide and other greenhouse gases, it has an effect on global warming. When looking into a way to slow the increase of global warming nations are taking action to use less energy by withdrawing themselves from things that require a lot of energy and creating or building alternatives fuels for their homes and more. As an individual, I can work on using my car less, so gas is not used as much to minimize the release of carbon dioxide. With that, I will take the public transportation or car poll. At home, if items that require electricity is not being used, they can be unplugged and put away. There are so many ways people can work toward slowing global warming’s increased effect on the environment. So for that matter, after doing all the research that I have, I agree that global warming is a huge trend and it is real. The resources showed the increase through important facts and also with graphs to prove and show the evidences of what is happening in our atmosphere. Now reviewing the paper and everything learned, one can say that a change needs to occur. The change does not have to be all at once, it can be something that is gradually worked on. People just need to know that action is needed because the cause of disasters is us. As the atmosphere continues to change it is becoming more dangerous not only for the human population but most of all for our planet itself.

Global Warming: The truth behind the matter. (2022, May 01). Retrieved from https://papersowl.com/examples/global-warming-the-truth-behind-the-matter/