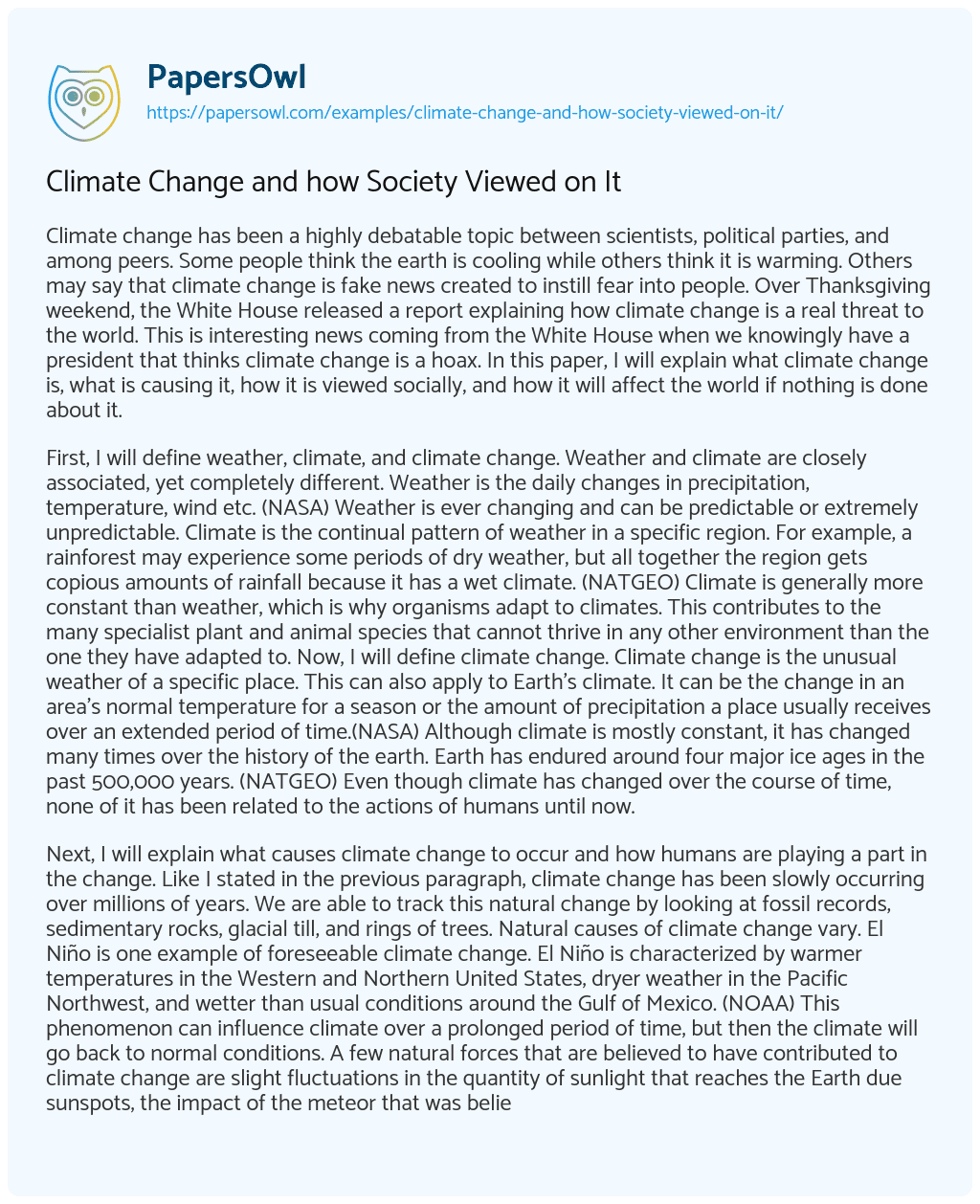 First, I will define weather, climate, and climate change. Weather and climate are closely associated, yet completely different. Weather is the daily changes in precipitation, temperature, wind etc. (NASA) Weather is ever changing and can be predictable or extremely unpredictable. Climate is the continual pattern of weather in a specific region. For example, a rainforest may experience some periods of dry weather, but all together the region gets copious amounts of rainfall because it has a wet climate. (NATGEO) Climate is generally more constant than weather, which is why organisms adapt to climates. This contributes to the many specialist plant and animal species that cannot thrive in any other environment than the one they have adapted to. Now, I will define climate change. Climate change is the unusual weather of a specific place. This can also apply to Earth’s climate. It can be the change in an area’s normal temperature for a season or the amount of precipitation a place usually receives over an extended period of time.(NASA) Although climate is mostly constant, it has changed many times over the history of the earth. Earth has endured around four major ice ages in the past 500,000 years. (NATGEO) Even though climate has changed over the course of time, none of it has been related to the actions of humans until now.

Next, I will explain what causes climate change to occur and how humans are playing a part in the change. Like I stated in the previous paragraph, climate change has been slowly occurring over millions of years. We are able to track this natural change by looking at fossil records, sedimentary rocks, glacial till, and rings of trees. Natural causes of climate change vary. El Niño is one example of foreseeable climate change. El Niño is characterized by warmer temperatures in the Western and Northern United States, dryer weather in the Pacific Northwest, and wetter than usual conditions around the Gulf of Mexico. (NOAA) This phenomenon can influence climate over a prolonged period of time, but then the climate will go back to normal conditions. A few natural forces that are believed to have contributed to climate change are slight fluctuations in the quantity of sunlight that reaches the Earth due sunspots, the impact of the meteor that was believed to have killed the dinosaurs, plate tectonics moving causing ocean currents to change, and the release of greenhouse gasses from volcanoes. (NATGEO) Then we have anthropogenic global warming, which is the belief that humans are the dominant source of excessive greenhouse gas emissions causing the global climate to change. This concept has been widely debated among scientists, politicians, and peers, but new studies have shown AGW to be the most likely cause of climate change. According to an IPCC Special Report, “human-induced warming reached approximately 0.1°C (likely between 0.8°C and 1.2°C) above pre-industrial levels in 2017, increasing at 0.2°C per decade. Global warming is defined in the report as an increase in combined surface air and sea surface temperatures averaged over the globe and over a 30-year period.” Human activity that increases greenhouse gasses includes burning of fossil fuels for transportation, electricity, industry, commercial and residential uses, and agriculture. Greenhouse gasses such as carbon dioxide, methane, and nitrous oxide are released into the atmosphere in excess causing the greenhouse effect to warm the Earth more than usual which changes weather patterns and climate. In 2017, it was reported that the global average of atmospheric carbon dioxide was 405 parts per million. Carbon dioxide levels are greater than at any time in the last 800,000 years.(CLIMATE)

Now, I will convey how climate change is viewed socially. In a study done on quantifying the consensus on anthropogenic global warming in scientific literature, the researchers gathered that “surveys of climate scientists have found strong agreement (97%-98%) regarding anthropogenic global warming amongst publishing climate experts. Repeated surveys of scientists found that scientific agreement about AGW steadily increased from 1996 to 2009.”(IOP) Although the majority of scientists agree that climate change is occurring due to the actions of humans, society cannot agree on whether climate change is a hoax or if it is really happening, which is a terrifying reality. Unfortunately, in today’s political climate, political parties play a huge role in how people view the environment and climate change. With the election of Donald Trump came the greatest rollback of federal land protections in American history (NEWS) as well as encouraged drilling and bringing back coal. Donald Trump has publicly denounced scientific research and has seemingly waged a war on science. President Trump also backed out of the Paris Climate Accord, making the United States, Syria, and Nicaragua the only countries who have not agreed to lowering greenhouse gas emissions. What is even more alarming being that fact that the White House released the Fourth National Climate assessment stating that “climate change creates new risks and exacerbates existing vulnerabilities in communities across the United States, presenting growing challenges to human health and safety, quality of life, and the rate of economic growth” (NCA), is that the president simply told the media he did not believe news coming from the establishment that he is in charge of. When a president expresses to the American people that he does not believe in science, it allows citizens to be misinformed. America also has a problem with political parties. At the moment, there seems to be either extreme republicans or extreme democrats. The issue with that is people believe that you are a republican then you have to deny climate change, while if you are a democrat then you must “hug trees”. Obviously, this is a generalization, but an accurate description of how politics and climate change are related.

Finally, I will describe how with a president that is ignoring climate experts and a country that cannot agree that climate change is a real threat, what we can do to change this narrative and what will happen if nothing changes. First of all, every country should be a part of the Paris Agreement and make a conscious decision to lower greenhouse gas emissions. Second, the world needs to focus more on renewable, clean energy like solar energy instead of obsessing over oil. Backing away from oil would also reduce tensions between the United States and other countries as well. Land should be conserved and set aside to maintain biodiversity, protect forests that serve as carbon sinks, and for its intrinsic value. Sadly, the world is not headed in that direction. According the The Guardian, “Britain is pushing ahead with gas fracking, Norway with oil exploration in the Arctic, and the German government wants to tear down Hambach forest to dig for coal.” (GUARD) If our obsession with oil does not change and greenhouse gasses continue to fill the air at the current rate, the Earth’s temperature will continue to rise causing ice caps to melt, sea levels to rise, oceans will acidify and corals will die off, droughts will occur more often, and strong storms will occur more frequently.(Weubles) As stated by the Expert Consensus on the Economics of Climate Change, “respondents believe that numerous sectors of the U.S. Economy will be harmed by climate change. A majority predicted negative impacts on agriculture (94%), fishing (78%), utilities (electricity, water, sanitation- 74%), forestry (73%), tourism/outdoor recreation (72%), insurance (66%), and health services (54%).” (POLICY) We are already seeing the effects of climate change. This year Cape Town, South Africa nearly ran out of water to due extreme drought and the Gulf of Mexico experienced the first category five hurricane in recorded history.

In conclusion, climate change is a phenomenon that should be taken seriously by everyone across the globe. The United States in the most powerful country in the world, and if we continue to ignore and deny climate change, it will be perilous for the rest of the planet. As humans, we need to realize that just because climate change may not be directly impacting us at the moment does not mean that it is going to go away. We need to be educated and informed on scientific research and make our own assumptions about how we feel about climate change that is not based on which political party we are a part of. Lastly, we should realize that oil will not last forever and invest our time and money on renewable energy that will help preserve our environment for generations upon generations.

Climate Change and how Society Viewed on It. (2021, Oct 17). Retrieved from https://papersowl.com/examples/climate-change-and-how-society-viewed-on-it/