Cultural Context in “Of Mice and Men” 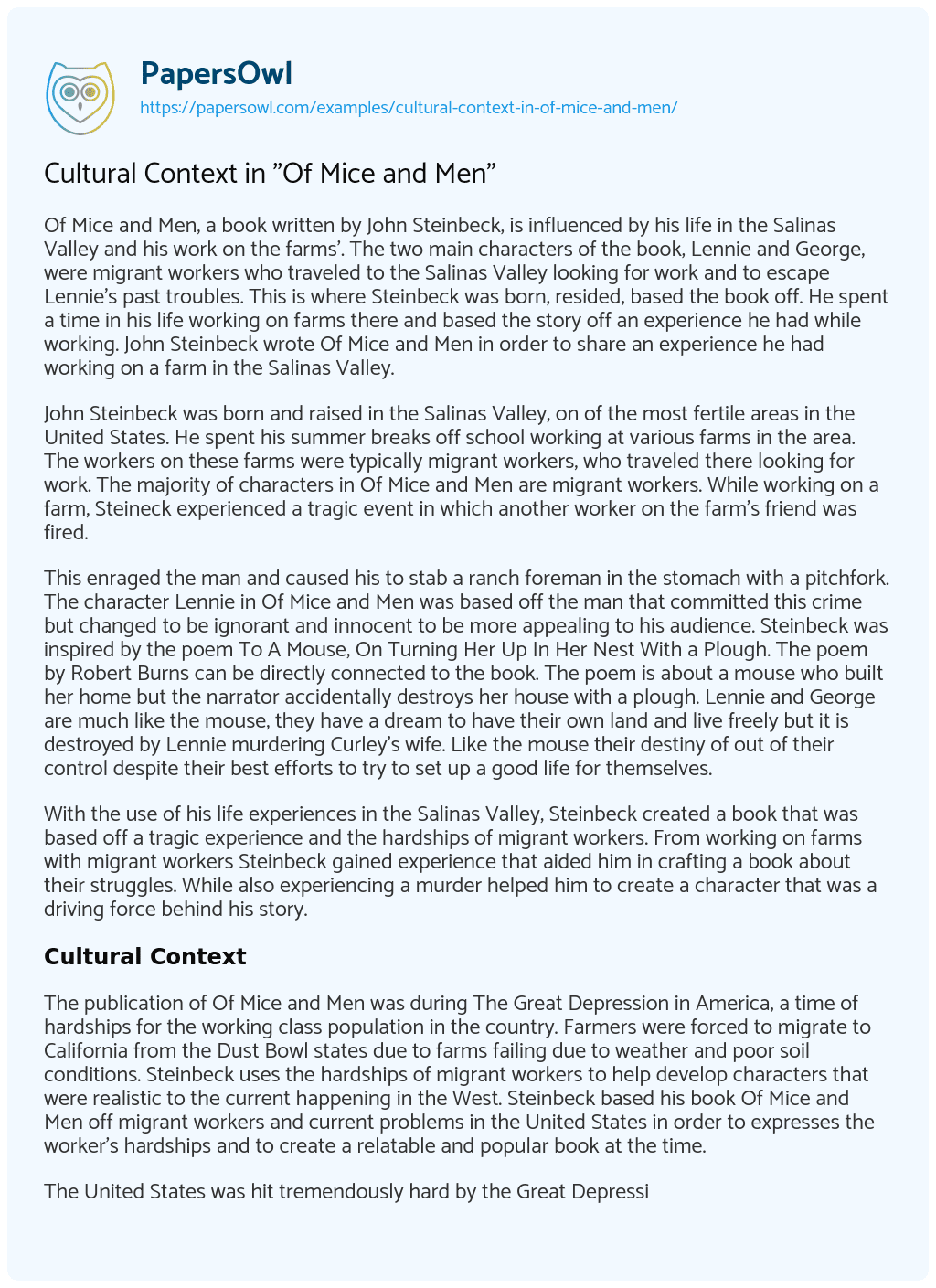 Of Mice and Men, a book written by John Steinbeck, is influenced by his life in the Salinas Valley and his work on the farms’. The two main characters of the book, Lennie and George, were migrant workers who traveled to the Salinas Valley looking for work and to escape Lennie’s past troubles. This is where Steinbeck was born, resided, based the book off. He spent a time in his life working on farms there and based the story off an experience he had while working. John Steinbeck wrote Of Mice and Men in order to share an experience he had working on a farm in the Salinas Valley.

John Steinbeck was born and raised in the Salinas Valley, on of the most fertile areas in the United States. He spent his summer breaks off school working at various farms in the area. The workers on these farms were typically migrant workers, who traveled there looking for work. The majority of characters in Of Mice and Men are migrant workers. While working on a farm, Steineck experienced a tragic event in which another worker on the farm’s friend was fired.

This enraged the man and caused his to stab a ranch foreman in the stomach with a pitchfork. The character Lennie in Of Mice and Men was based off the man that committed this crime but changed to be ignorant and innocent to be more appealing to his audience. Steinbeck was inspired by the poem To A Mouse, On Turning Her Up In Her Nest With a Plough. The poem by Robert Burns can be directly connected to the book. The poem is about a mouse who built her home but the narrator accidentally destroys her house with a plough. Lennie and George are much like the mouse, they have a dream to have their own land and live freely but it is destroyed by Lennie murdering Curley’s wife. Like the mouse their destiny of out of their control despite their best efforts to try to set up a good life for themselves.

With the use of his life experiences in the Salinas Valley, Steinbeck created a book that was based off a tragic experience and the hardships of migrant workers. From working on farms with migrant workers Steinbeck gained experience that aided him in crafting a book about their struggles. While also experiencing a murder helped him to create a character that was a driving force behind his story.

The publication of Of Mice and Men was during The Great Depression in America, a time of hardships for the working class population in the country. Farmers were forced to migrate to California from the Dust Bowl states due to farms failing due to weather and poor soil conditions. Steinbeck uses the hardships of migrant workers to help develop characters that were realistic to the current happening in the West. Steinbeck based his book Of Mice and Men off migrant workers and current problems in the United States in order to expresses the worker’s hardships and to create a relatable and popular book at the time.

The United States was hit tremendously hard by the Great Depression and it caused the loss of a large amount of jobs from the population. A large reason why the Depression started was the crash of the stock market. This dented the economy and caused a large majority of people to be laid off from their jobs. Farmers were already struggling with low prices before the Depression but after the crash and the unemployment rate increased, people could not afford to buy what the farmers were producing, causing a large majority of small farms to struggle. During the Depression farmers in the midwest were also hit with Dust Bowl which caused them to lose their valuable farmland and not be able to pay back their loans for materials.

The direct result was farmers losing everything they had and migrating to California, where they seeked any job they could, to try to earn a living. The reason California was so popular was it was never affected by the Dust Bowl and there were still opportunities for jobs on the farms there. George and Lennie were migrant workers but not because of the Dust Bowl. They were looking for work after being run out of their previous town because of Lennie’s mishaps. The migrants faced many issues when traveling to California like an overabundance of people but not enough jobs to satisfy the demand.

The migrant life was Most migrant workers faced harsh living conditions, setting up camp next to the farm’s irrigation ditches. Lennie and George experienced this when living at their farm. They arrived to their bunkhouse and found a can the said it killed lice and other bugs. Migrant workers did backbreaking work and were expected to do this for an ungodly amount of hours for a very meager salary. This is expressed when a conversation is brought up about their American Dream and george claims that if they don’t spend any money, he and Lennie will have one hundred dollars by the end of the month.

Cultural Context in "Of Mice and Men". (2019, Sep 04). Retrieved from https://papersowl.com/examples/cultural-context-in-of-mice-and-men/

Of Mice and Men Consists