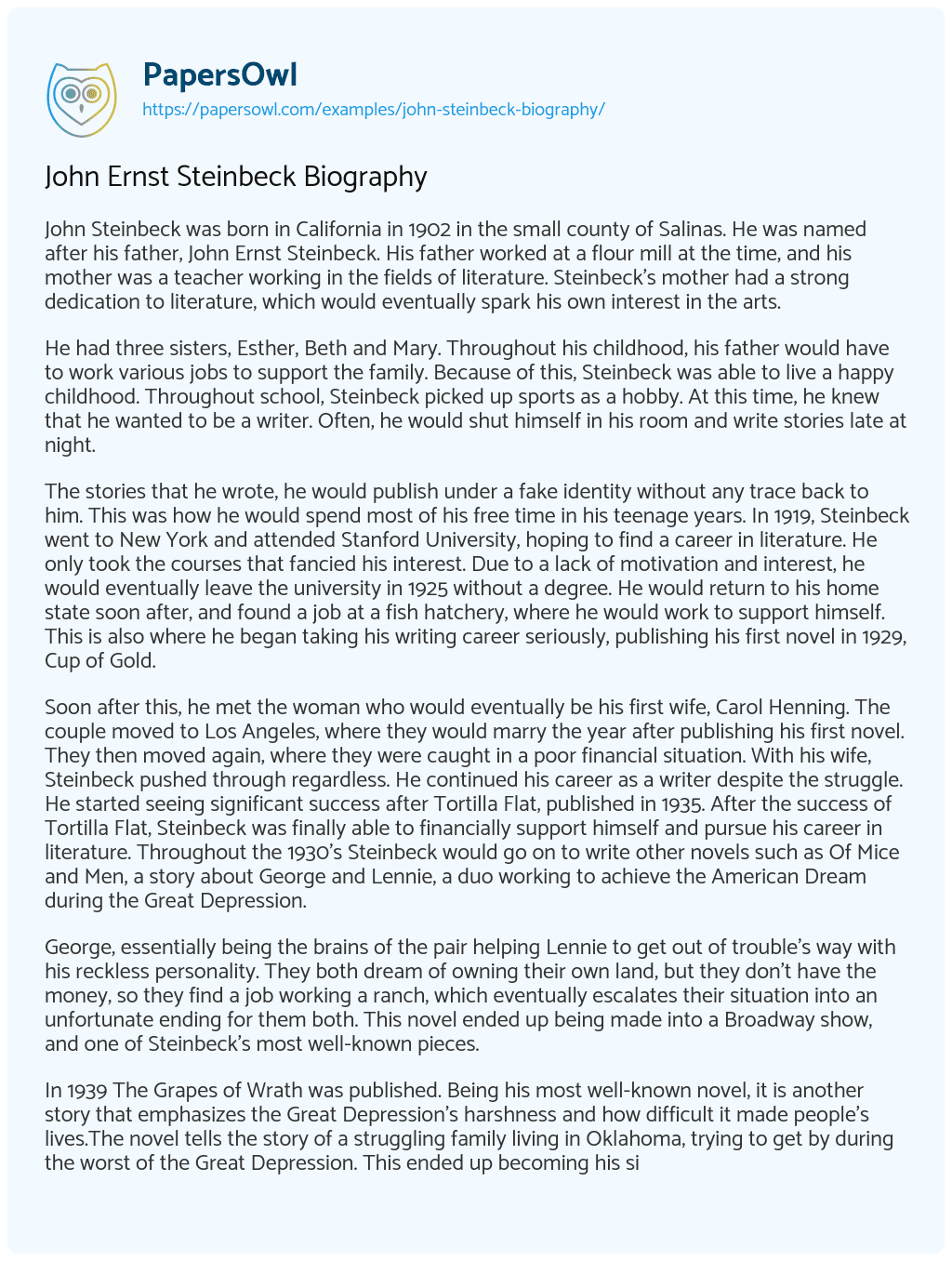 John Steinbeck was born in California in 1902 in the small county of Salinas. He was named after his father, John Ernst Steinbeck. His father worked at a flour mill at the time, and his mother was a teacher working in the fields of literature. Steinbeck’s mother had a strong dedication to literature, which would eventually spark his own interest in the arts.

He had three sisters, Esther, Beth and Mary. Throughout his childhood, his father would have to work various jobs to support the family. Because of this, Steinbeck was able to live a happy childhood. Throughout school, Steinbeck picked up sports as a hobby. At this time, he knew that he wanted to be a writer. Often, he would shut himself in his room and write stories late at night.

The stories that he wrote, he would publish under a fake identity without any trace back to him. This was how he would spend most of his free time in his teenage years. In 1919, Steinbeck went to New York and attended Stanford University, hoping to find a career in literature. He only took the courses that fancied his interest. Due to a lack of motivation and interest, he would eventually leave the university in 1925 without a degree. He would return to his home state soon after, and found a job at a fish hatchery, where he would work to support himself. This is also where he began taking his writing career seriously, publishing his first novel in 1929, Cup of Gold.

Soon after this, he met the woman who would eventually be his first wife, Carol Henning. The couple moved to Los Angeles, where they would marry the year after publishing his first novel. They then moved again, where they were caught in a poor financial situation. With his wife, Steinbeck pushed through regardless. He continued his career as a writer despite the struggle. He started seeing significant success after Tortilla Flat, published in 1935. After the success of Tortilla Flat, Steinbeck was finally able to financially support himself and pursue his career in literature. Throughout the 1930’s Steinbeck would go on to write other novels such as Of Mice and Men, a story about George and Lennie, a duo working to achieve the American Dream during the Great Depression.

George, essentially being the brains of the pair helping Lennie to get out of trouble’s way with his reckless personality. They both dream of owning their own land, but they don’t have the money, so they find a job working a ranch, which eventually escalates their situation into an unfortunate ending for them both. This novel ended up being made into a Broadway show, and one of Steinbeck’s most well-known pieces.

In 1939 The Grapes of Wrath was published. Being his most well-known novel, it is another story that emphasizes the Great Depression’s harshness and how difficult it made people’s lives.The novel tells the story of a struggling family living in Oklahoma, trying to get by during the worst of the Great Depression. This ended up becoming his signature novel, selling up to ten thousand copies every week at it’s peak in popularity.

The New York Times deemed the novel as best seller of 1939, and it won a National Award in early 1940. While it was his best seller, it did stir some controversy. Because of this, Kern County suspended the book for two years from schools. Despite the success he had, he was not a fan of the spotlight. He left the public eye with a friend and ventured off to the gulf of California where he would separate from Carol soon after. They divorced officially in 1943.

After that he would meet the person who would become his second wife, Gwyn Conger. He had two boys with her, Thomas and John Steinbeck Jr. Soon after marrying his new wife, he was enlisted as a reporter for the second world war. During the war he would write Bombs Away: The Story of the Bomber Team in 1942 and Lifeboat in 1944. Around this time, he would also be hired onto the New York Herald Tribune during the war. After the war, he took his time to write The Pearl, inspired by a tale he heard in La Paz while he was on a trip. After the emotional passing of a friend, Steinbeck’s second wife wanted to divorce upon him coming home from the funeral in New York. These two losses would leave him in a depressed state in 1948.

The following year he would meet the woman who would be with him for the remainder of his life. His third wife, Elaine Scott who was a friend of an actress who went to go visit Steinbeck.

East Of Eden would be his next big project. Set in his hometown, and loosely based on his family and it’s hardships,, the novel tells the story of two families of farmers, the “Hamiltons” and the “Trasks” and how their fate is similar to that of the downfall of Adam and Eve. The novel took Steinbeck almost a year to create. It is often regarded as one of his best works, up with Of Mice and Men and Grapes of Wrath.

This would be one of the last major novels he’d finish. Steinbeck and Elaine travelled together a lot. The couple spent close to a year in England. Upon returning to America, Steinbeck would begin work on what would be the last major novel he would publish before his death. In 1961, The Winter of our Discontent. It told the story of protagonist Ethan, who was part of a once wealthy family that went broke. Ethan worked at the shop his family once owned, and as the plot progressed Ethan would take immoral paths to regain the success of his family and take over the shop, such as getting his owner deported and setting a friend of his up that owned property to commit suicide. Guilt would eventually catch up to him, and he would make the decision to kill himself as well.

His daughter picks up on his emotions and switches out his blades for a talisman. After realizing, Ethan would return home and live on. The story depicts the immoral routes people take to success in America and despite that, the people who are still pure in their society. After publishing this novel, Steinbeck would receive a Nobel Prize for literature in 1962.

Two years later, in 1964, he was received a Presidential Medal of Freedom. In 1966, Steinbeck would write what would be his final book. America and Americans was a book about America’s typical demographic and overall environment. Unfortunately, his deteriorating health over the 1960’s would eventually lead to a death to heart disease on Dec. 20, 1968.

His work would still stand to be popular with Americans and Europeans. He was admired for his imaginative writing and realism, and his most popular novels would be made into various films and be studied in schools after his death.