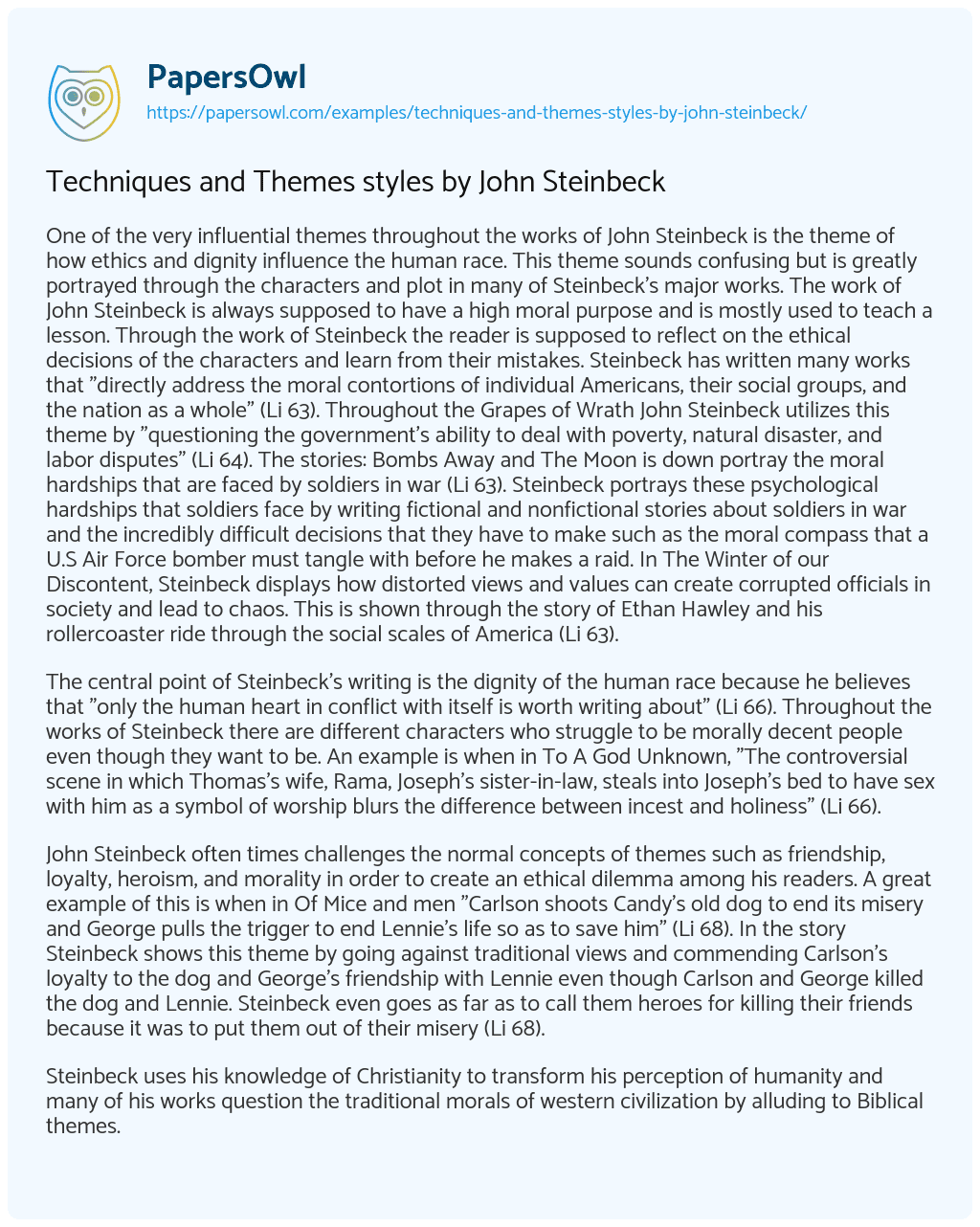 One of the very influential themes throughout the works of John Steinbeck is the theme of how ethics and dignity influence the human race. This theme sounds confusing but is greatly portrayed through the characters and plot in many of Steinbeck’s major works. The work of John Steinbeck is always supposed to have a high moral purpose and is mostly used to teach a lesson. Through the work of Steinbeck the reader is supposed to reflect on the ethical decisions of the characters and learn from their mistakes. Steinbeck has written many works that “directly address the moral contortions of individual Americans, their social groups, and the nation as a whole” (Li 63). Throughout the Grapes of Wrath John Steinbeck utilizes this theme by “questioning the government’s ability to deal with poverty, natural disaster, and labor disputes” (Li 64). The stories: Bombs Away and The Moon is down portray the moral hardships that are faced by soldiers in war (Li 63). Steinbeck portrays these psychological hardships that soldiers face by writing fictional and nonfictional stories about soldiers in war and the incredibly difficult decisions that they have to make such as the moral compass that a U.S Air Force bomber must tangle with before he makes a raid. In The Winter of our Discontent, Steinbeck displays how distorted views and values can create corrupted officials in society and lead to chaos. This is shown through the story of Ethan Hawley and his rollercoaster ride through the social scales of America (Li 63).

The central point of Steinbeck’s writing is the dignity of the human race because he believes that “only the human heart in conflict with itself is worth writing about” (Li 66). Throughout the works of Steinbeck there are different characters who struggle to be morally decent people even though they want to be. An example is when in To A God Unknown, “The controversial scene in which Thomas’s wife, Rama, Joseph’s sister-in-law, steals into Joseph’s bed to have sex with him as a symbol of worship blurs the difference between incest and holiness” (Li 66).

John Steinbeck often times challenges the normal concepts of themes such as friendship, loyalty, heroism, and morality in order to create an ethical dilemma among his readers. A great example of this is when in Of Mice and men “Carlson shoots Candy’s old dog to end its misery and George pulls the trigger to end Lennie’s life so as to save him” (Li 68). In the story Steinbeck shows this theme by going against traditional views and commending Carlson’s loyalty to the dog and George’s friendship with Lennie even though Carlson and George killed the dog and Lennie. Steinbeck even goes as far as to call them heroes for killing their friends because it was to put them out of their misery (Li 68).

Steinbeck uses his knowledge of Christianity to transform his perception of humanity and many of his works question the traditional morals of western civilization by alluding to Biblical themes. John Steinbeck often “emulates metaphorical allusions to other religious counterparts of Christianity.” In To A God Unknown, “the story of Joseph is that of a man with a mysterious intuition, who is gradually absorbed into a cult which is against the Christian doctrine” (Li 70).

John Steinbeck’s of Mice and Men

Who was a John Steinbeck?