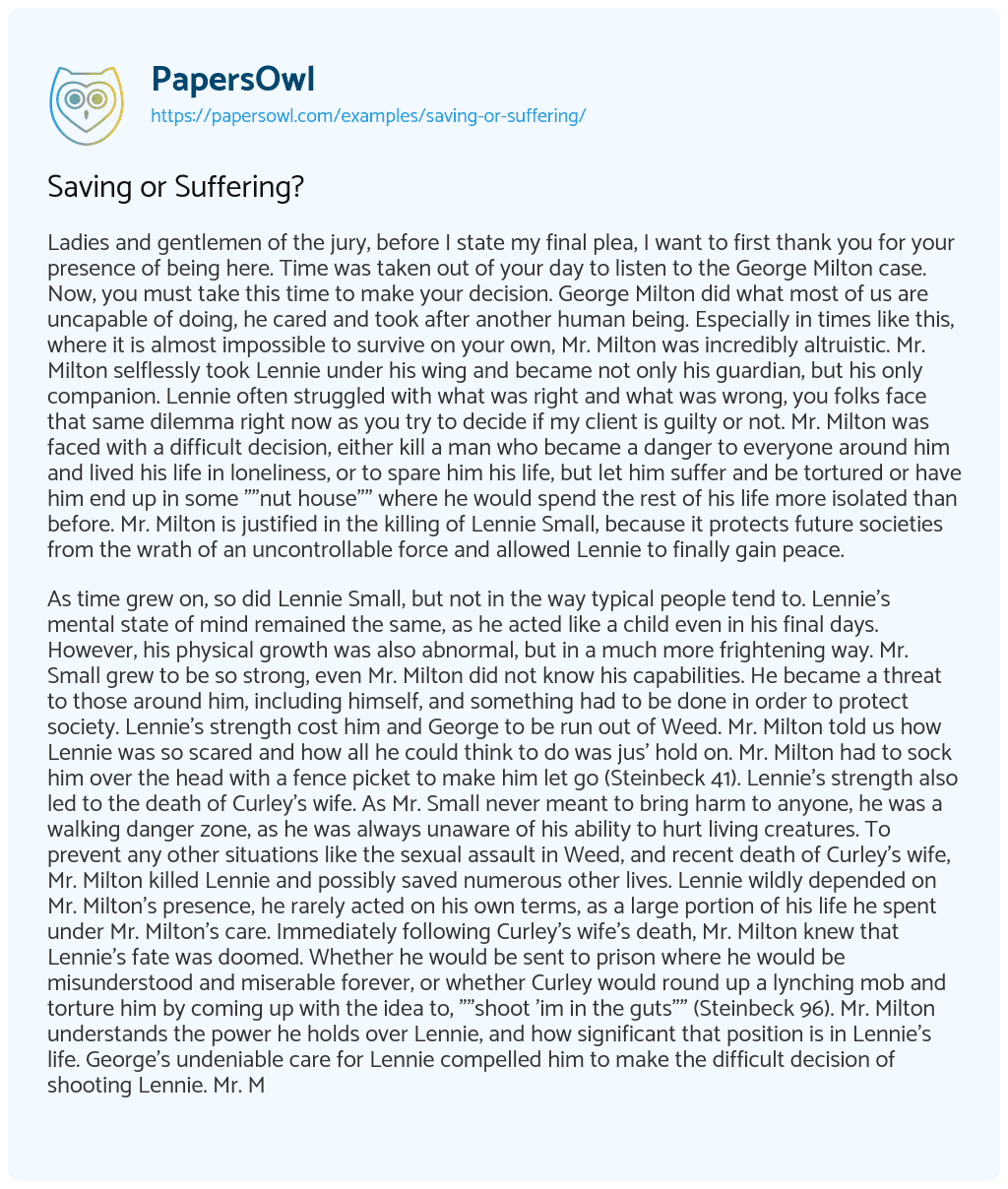 Ladies and gentlemen of the jury, before I state my final plea, I want to first thank you for your presence of being here. Time was taken out of your day to listen to the George Milton case. Now, you must take this time to make your decision. George Milton did what most of us are uncapable of doing, he cared and took after another human being. Especially in times like this, where it is almost impossible to survive on your own, Mr. Milton was incredibly altruistic. Mr. Milton selflessly took Lennie under his wing and became not only his guardian, but his only companion. Lennie often struggled with what was right and what was wrong, you folks face that same dilemma right now as you try to decide if my client is guilty or not. Mr. Milton was faced with a difficult decision, either kill a man who became a danger to everyone around him and lived his life in loneliness, or to spare him his life, but let him suffer and be tortured or have him end up in some “”nut house”” where he would spend the rest of his life more isolated than before. Mr. Milton is justified in the killing of Lennie Small, because it protects future societies from the wrath of an uncontrollable force and allowed Lennie to finally gain peace.

As time grew on, so did Lennie Small, but not in the way typical people tend to. Lennie’s mental state of mind remained the same, as he acted like a child even in his final days. However, his physical growth was also abnormal, but in a much more frightening way. Mr. Small grew to be so strong, even Mr. Milton did not know his capabilities. He became a threat to those around him, including himself, and something had to be done in order to protect society. Lennie’s strength cost him and George to be run out of Weed. Mr. Milton told us how Lennie was so scared and how all he could think to do was jus’ hold on. Mr. Milton had to sock him over the head with a fence picket to make him let go (Steinbeck 41). Lennie’s strength also led to the death of Curley’s wife. As Mr. Small never meant to bring harm to anyone, he was a walking danger zone, as he was always unaware of his ability to hurt living creatures. To prevent any other situations like the sexual assault in Weed, and recent death of Curley’s wife, Mr. Milton killed Lennie and possibly saved numerous other lives. Lennie wildly depended on Mr. Milton’s presence, he rarely acted on his own terms, as a large portion of his life he spent under Mr. Milton’s care. Immediately following Curley’s wife’s death, Mr. Milton knew that Lennie’s fate was doomed. Whether he would be sent to prison where he would be misunderstood and miserable forever, or whether Curley would round up a lynching mob and torture him by coming up with the idea to, “”shoot ‘im in the guts”” (Steinbeck 96). Mr. Milton understands the power he holds over Lennie, and how significant that position is in Lennie’s life. George’s undeniable care for Lennie compelled him to make the difficult decision of shooting Lennie. Mr. Milton explained his understanding of this situation to his colleague, Slim. One time when Mr. Milton was messing with Lennie, Lennie almost drowned. Mr. Milton mentioned this earlier as he said, “”I turns to Lennie and says, ‘Jump in.’ An’ he jumps. Couldn’t swim a stroke. He damn near drowned before we could get him,”” (Steinbeck 40). His statement clearly shows that after that encounter he would never abuse the power he has over Lennie again. Once he understands that no one will care for Lennie as he did, he realizes the only way Lennie can truly be set free is through death.

I want those of you who are parents to imagine your child in a state similar to Lennie Small; unable to communicate with his peers, unable to understand right from wrong. Constantly in a state of worry, living in a whole separate world from everyone else. His life was full of struggle, Lennie was never able to be at peace. He never had acceptance, never had a friend to understand how he saw the world and why he did what he did. What Mr. Milton did was out of love. As malice as the act of murder is, George did not commit this crime. Mr. Milton gave Lennie the peace he has never had. Lennie is now in a place where he can live happily, without worrying and without confusion. Everybody deserves to belong. Because of George, Lennie Small now can.