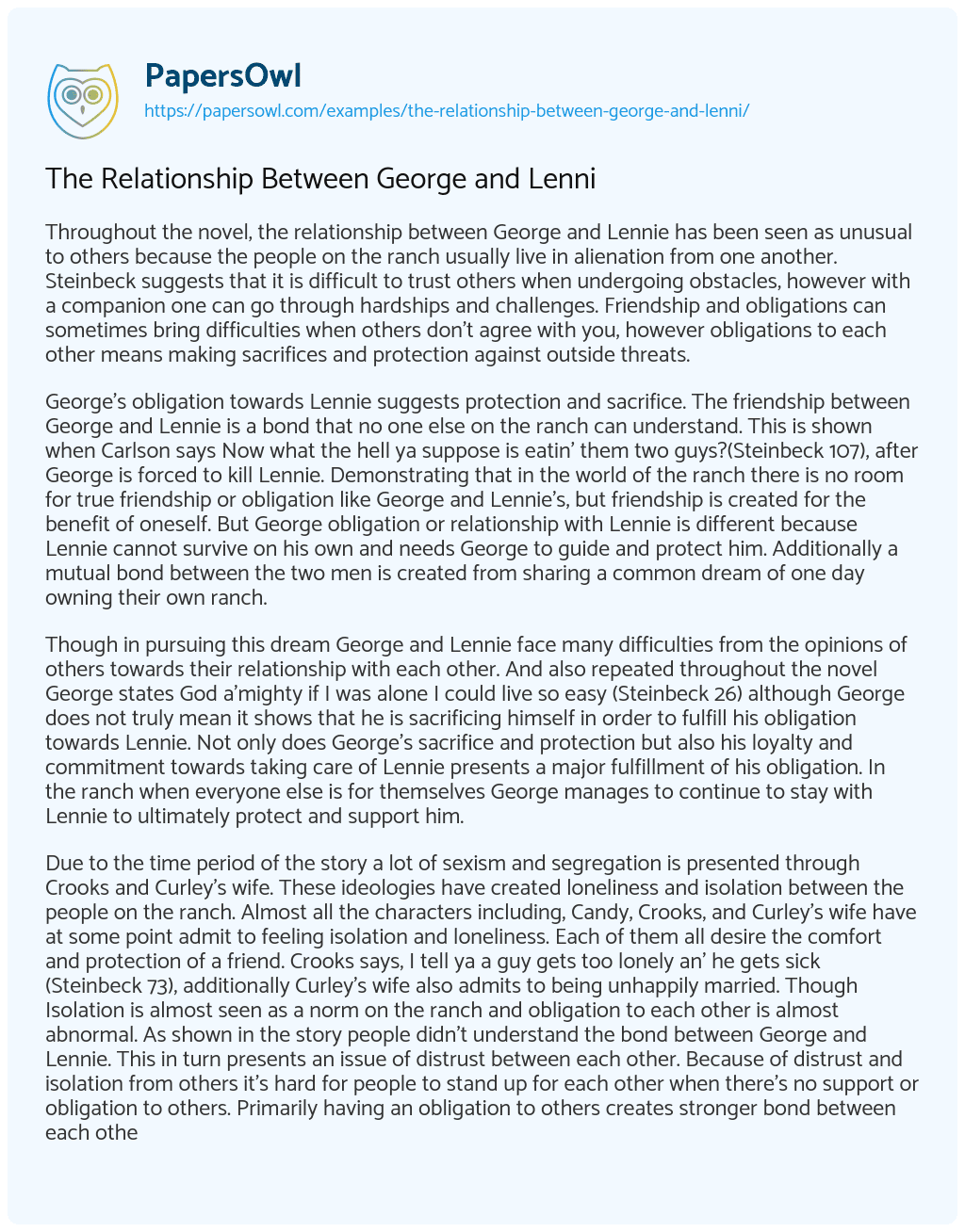 Throughout the novel, the relationship between George and Lennie has been seen as unusual to others because the people on the ranch usually live in alienation from one another. Steinbeck suggests that it is difficult to trust others when undergoing obstacles, however with a companion one can go through hardships and challenges. Friendship and obligations can sometimes bring difficulties when others don’t agree with you, however obligations to each other means making sacrifices and protection against outside threats.

George’s obligation towards Lennie suggests protection and sacrifice. The friendship between George and Lennie is a bond that no one else on the ranch can understand. This is shown when Carlson says Now what the hell ya suppose is eatin’ them two guys?(Steinbeck 107), after George is forced to kill Lennie. Demonstrating that in the world of the ranch there is no room for true friendship or obligation like George and Lennie’s, but friendship is created for the benefit of oneself. But George obligation or relationship with Lennie is different because Lennie cannot survive on his own and needs George to guide and protect him. Additionally a mutual bond between the two men is created from sharing a common dream of one day owning their own ranch.

Though in pursuing this dream George and Lennie face many difficulties from the opinions of others towards their relationship with each other. And also repeated throughout the novel George states God a’mighty if I was alone I could live so easy (Steinbeck 26) although George does not truly mean it shows that he is sacrificing himself in order to fulfill his obligation towards Lennie. Not only does George’s sacrifice and protection but also his loyalty and commitment towards taking care of Lennie presents a major fulfillment of his obligation. In the ranch when everyone else is for themselves George manages to continue to stay with Lennie to ultimately protect and support him.

Due to the time period of the story a lot of sexism and segregation is presented through Crooks and Curley’s wife. These ideologies have created loneliness and isolation between the people on the ranch. Almost all the characters including, Candy, Crooks, and Curley’s wife have at some point admit to feeling isolation and loneliness. Each of them all desire the comfort and protection of a friend. Crooks says, I tell ya a guy gets too lonely an’ he gets sick (Steinbeck 73), additionally Curley’s wife also admits to being unhappily married. Though Isolation is almost seen as a norm on the ranch and obligation to each other is almost abnormal. As shown in the story people didn’t understand the bond between George and Lennie. This in turn presents an issue of distrust between each other. Because of distrust and isolation from others it’s hard for people to stand up for each other when there’s no support or obligation to others. Primarily having an obligation to others creates stronger bond between each other and overall a better relationship.

In conclusion having a companion or obligation to someone brings protection and guidance as opposed to isolation. This is represented many times throughout the novel, between the relationship of George and Lennie. Steinbeck continuously illustrates the powerful and important meaning behind obligations to each other through the story.

The Relationship Between George and Lenni. (2019, Oct 12). Retrieved from https://papersowl.com/examples/the-relationship-between-george-and-lenni/