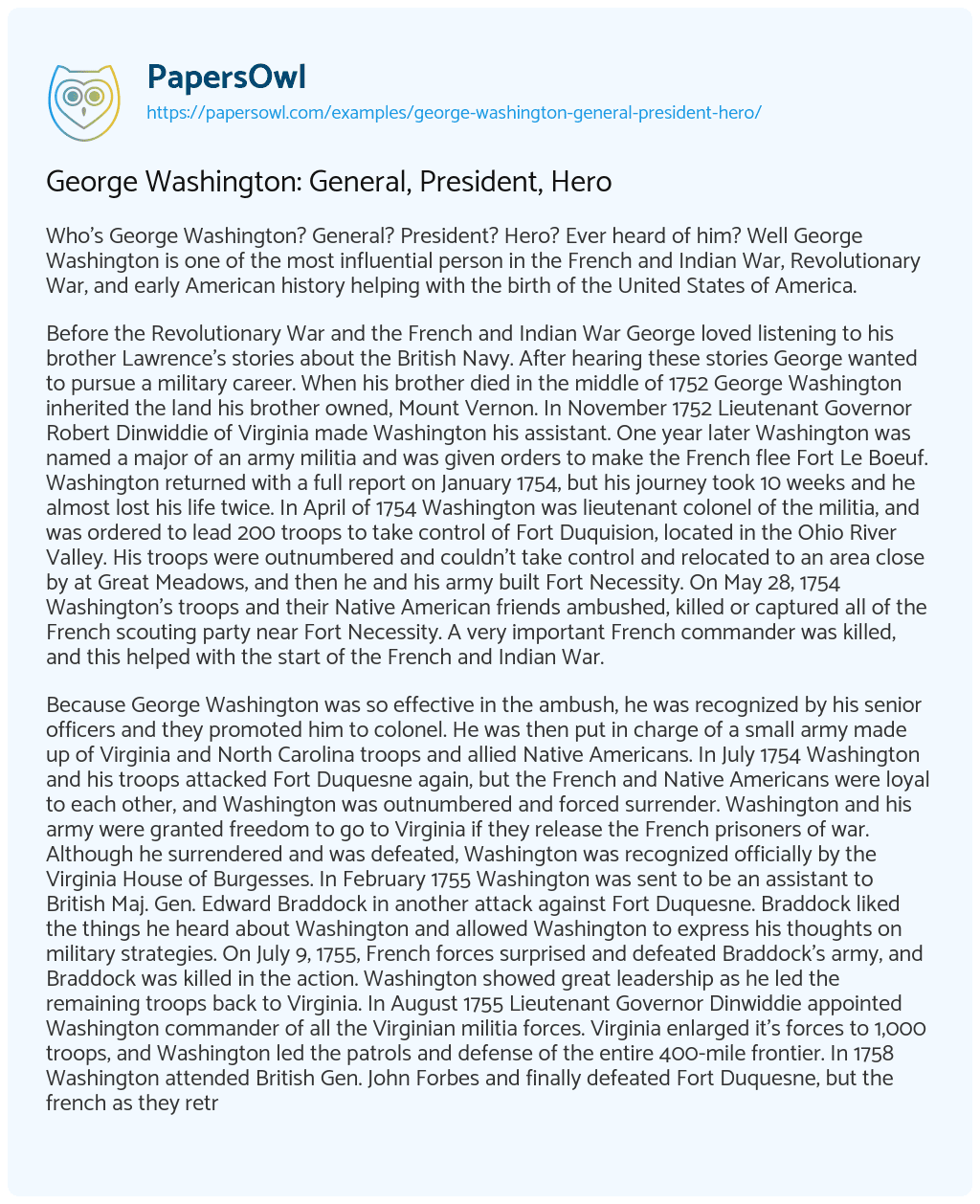 Who’s George Washington? General? President? Hero? Ever heard of him? Well George Washington is one of the most influential person in the French and Indian War, Revolutionary War, and early American history helping with the birth of the United States of America.

Before the Revolutionary War and the French and Indian War George loved listening to his brother Lawrence’s stories about the British Navy. After hearing these stories George wanted to pursue a military career. When his brother died in the middle of 1752 George Washington inherited the land his brother owned, Mount Vernon. In November 1752 Lieutenant Governor Robert Dinwiddie of Virginia made Washington his assistant. One year later Washington was named a major of an army militia and was given orders to make the French flee Fort Le Boeuf. Washington returned with a full report on January 1754, but his journey took 10 weeks and he almost lost his life twice. In April of 1754 Washington was lieutenant colonel of the militia, and was ordered to lead 200 troops to take control of Fort Duquision, located in the Ohio River Valley. His troops were outnumbered and couldn’t take control and relocated to an area close by at Great Meadows, and then he and his army built Fort Necessity. On May 28, 1754 Washington’s troops and their Native American friends ambushed, killed or captured all of the French scouting party near Fort Necessity. A very important French commander was killed, and this helped with the start of the French and Indian War.

Because George Washington was so effective in the ambush, he was recognized by his senior officers and they promoted him to colonel. He was then put in charge of a small army made up of Virginia and North Carolina troops and allied Native Americans. In July 1754 Washington and his troops attacked Fort Duquesne again, but the French and Native Americans were loyal to each other, and Washington was outnumbered and forced surrender. Washington and his army were granted freedom to go to Virginia if they release the French prisoners of war. Although he surrendered and was defeated, Washington was recognized officially by the Virginia House of Burgesses. In February 1755 Washington was sent to be an assistant to British Maj. Gen. Edward Braddock in another attack against Fort Duquesne. Braddock liked the things he heard about Washington and allowed Washington to express his thoughts on military strategies. On July 9, 1755, French forces surprised and defeated Braddock’s army, and Braddock was killed in the action. Washington showed great leadership as he led the remaining troops back to Virginia. In August 1755 Lieutenant Governor Dinwiddie appointed Washington commander of all the Virginian militia forces. Virginia enlarged it’s forces to 1,000 troops, and Washington led the patrols and defense of the entire 400-mile frontier. In 1758 Washington attended British Gen. John Forbes and finally defeated Fort Duquesne, but the french as they retreated burned down the fort. Forbes then established Fort Pitt on site, and Washington resigned from the army with the rank of brigadier general. While serving in his so called “final campaign” he was elected into the Virginia House of Burgesses.

Even before the Revolutionary War George Washington held an opinion on British taxing the colonies after the French and Indian War. Washington believed that the British Parliament had invaded the colonists’ rights. In April 1769 Washington proposed a plan to the House of Burgesses that they should boycott all British goods. He attended both the First and Second Continental Congress, and both of them are a huge stepping stone on how the Revolutionary War started. When one of the first battle broke out, Battle of Bunker Hill in June 1775, although Washington wasn’t there he was ready to fight and the Revolutionary War had started. In December of 1776 Washington and his men crossed the Delaware River from Pennsylvania to New Jersey, where he won two battles at Trenton and Princeton. Later Washington and company were pushed out of Pennsylvania due to losses at the battles of Brandywine and Germantown in the fall of 1777. He withdrew and set up camp for the winter to reorganize despite the cold at Valley Forge. By 1778 French forces were allied and helped with the colonists fight against the British. On October 19, 1781 Washington’s troops, French naval fleets, and ground troops planned a siege at Yorktown, Virginia. The Redcoats were forced to surrender, and the Treaty of Paris was signed on September 3, 1783, it was official the Revolutionary War was over. Washington stayed with the Continental Congress for a few more months and resigned.

George Washington – the First President of the United States of America

George Washington and the Revolutionary War