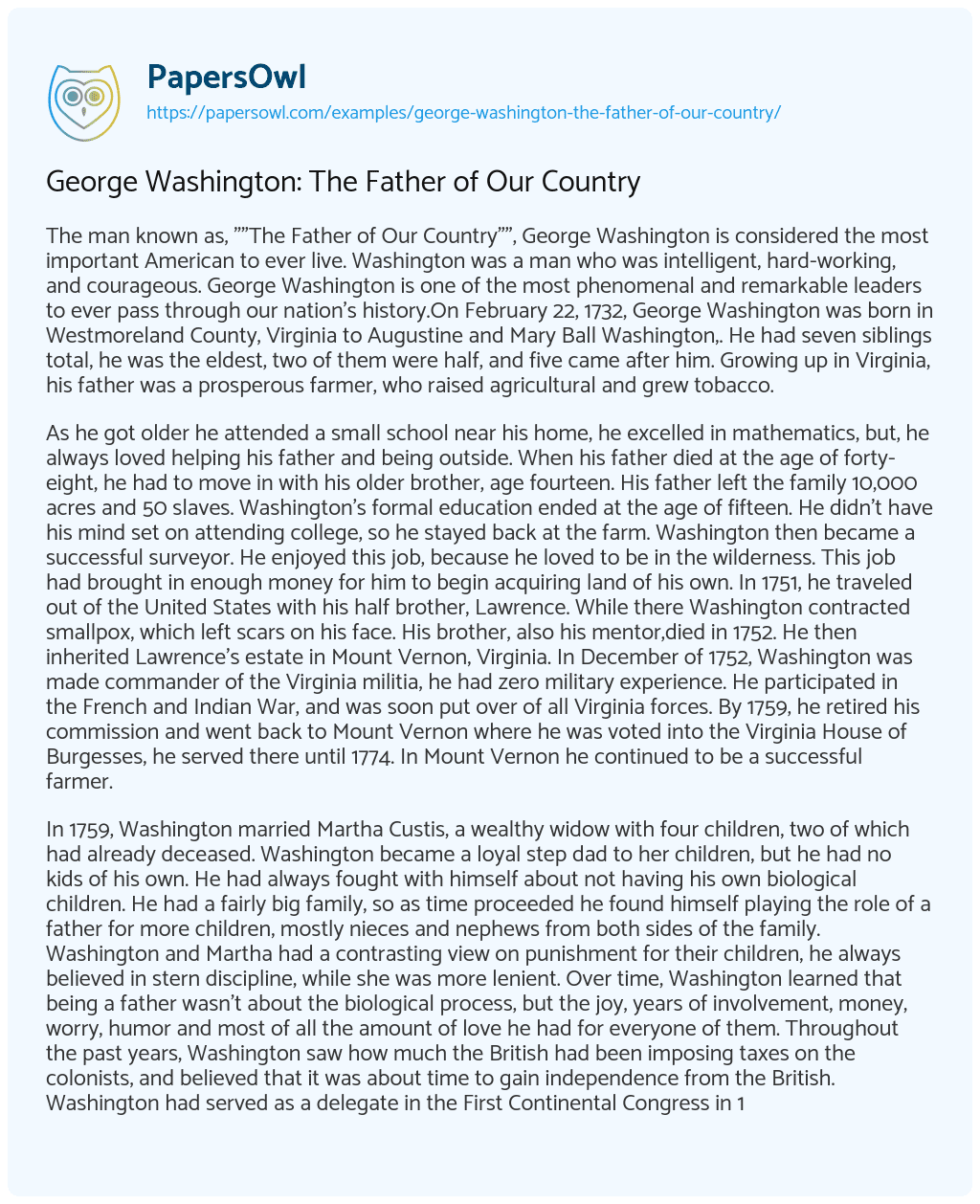 The man known as, “”The Father of Our Country””, George Washington is considered the most important American to ever live. Washington was a man who was intelligent, hard-working, and courageous. George Washington is one of the most phenomenal and remarkable leaders to ever pass through our nation’s history.On February 22, 1732, George Washington was born in Westmoreland County, Virginia to Augustine and Mary Ball Washington,. He had seven siblings total, he was the eldest, two of them were half, and five came after him. Growing up in Virginia, his father was a prosperous farmer, who raised agricultural and grew tobacco.

As he got older he attended a small school near his home, he excelled in mathematics, but, he always loved helping his father and being outside. When his father died at the age of forty-eight, he had to move in with his older brother, age fourteen. His father left the family 10,000 acres and 50 slaves. Washington’s formal education ended at the age of fifteen. He didn’t have his mind set on attending college, so he stayed back at the farm. Washington then became a successful surveyor. He enjoyed this job, because he loved to be in the wilderness. This job had brought in enough money for him to begin acquiring land of his own. In 1751, he traveled out of the United States with his half brother, Lawrence. While there Washington contracted smallpox, which left scars on his face. His brother, also his mentor,died in 1752. He then inherited Lawrence’s estate in Mount Vernon, Virginia. In December of 1752, Washington was made commander of the Virginia militia, he had zero military experience. He participated in the French and Indian War, and was soon put over of all Virginia forces. By 1759, he retired his commission and went back to Mount Vernon where he was voted into the Virginia House of Burgesses, he served there until 1774. In Mount Vernon he continued to be a successful farmer.

In 1759, Washington married Martha Custis, a wealthy widow with four children, two of which had already deceased. Washington became a loyal step dad to her children, but he had no kids of his own. He had always fought with himself about not having his own biological children. He had a fairly big family, so as time proceeded he found himself playing the role of a father for more children, mostly nieces and nephews from both sides of the family. Washington and Martha had a contrasting view on punishment for their children, he always believed in stern discipline, while she was more lenient. Over time, Washington learned that being a father wasn’t about the biological process, but the joy, years of involvement, money, worry, humor and most of all the amount of love he had for everyone of them. Throughout the past years, Washington saw how much the British had been imposing taxes on the colonists, and believed that it was about time to gain independence from the British. Washington had served as a delegate in the First Continental Congress in 1774.

In June 1775, the Second Continental Congress had come back around, and the American Revolution had started to arise, so Washington was put in place to be commander in chief of the Continental Army. Washington had very little skill knowledge when it came to handling soldiers,calvieries, and militias. Even though they had faced many hardships, Washington always had the determination, courage, and mental agility to keep the American cause one step ahead. In March 1776, Washington and his troops withdrew from the city, it was only temporary. The British had an advantage when trying to take NYC, and they ended up defeating Washington and his army. In Pennsylvania, The Second Continental Congress had voted for the independence from the british, on July 2, 1776. Then on July 4, 1776, Thomas Jefferson wrote a declaration of the reasons why we should be independent. On July 6, Washington got a letter from John Hancock, with the Declaration of Independence in it. This news was one to celebrate with his army, he knew that his army wouldn’t just be defending the colonies, but now their new nation. Facing many defeats, the remains of the forces headed for the Delaware River on December 7. On Christmas night, Washington’s troops crossed the Delaware River, and attacked the garrison at Trenton, forcing the British to surrender. Over the eight years, Washington held his own. The French allied themselves with the colonial forces against the British to attack them in New York but did not succeed.

On October 19, 1781, Washington accepted the surrender of General Cornwallis, and his army. Although two more years passed before a peace treaty was completed, the victory at Yorktown finally brought the Revolutionary War to an end. After the treaty was signed and the war was over, Washington headed back to Mount Vernon where he believed his national duties were done.He was then asked to go to the Constitutional Convention, and lead the committee to draft the constitution. With his intriguing ways and leadership, the delegates knew that he was meant to be the nation’s first president. In 1789, Washington won the first presidential election. During presidency, he signed a treaty for the first National Bank, and set up his own presidential cabinet members.

Washington faced many troubles with debt and his secretaries of state and treasure. The two disagreed highly on central government and states rights, and Washington believed it was extremely harsh on the new government. In 1796, after two terms as president, Washington retired , and had declined the third term.He did not want all the power, as a king. Washington had shaped a new government for the people to come, and set a tradition for the ones to follow. Stated in his farewell address, he said not to have any permanent alliances, maintain high standards domestically, and keep foreign powers to a low minimum. On December 14, 1799, he caught a bad cold which then caused a throat infection, and he died at the age of sixty-seven. Washington was buried in his hometown, Mount Vernon, Virginia, by his wife Martha Washington. George Washington left on of the most enduring and powerful legacies of any American in history. People consider him, the man who could have been a king but refused the crown and saved a republic.

George Washington: The Father of Our Country. (2019, Jan 10). Retrieved from https://papersowl.com/examples/george-washington-the-father-of-our-country/