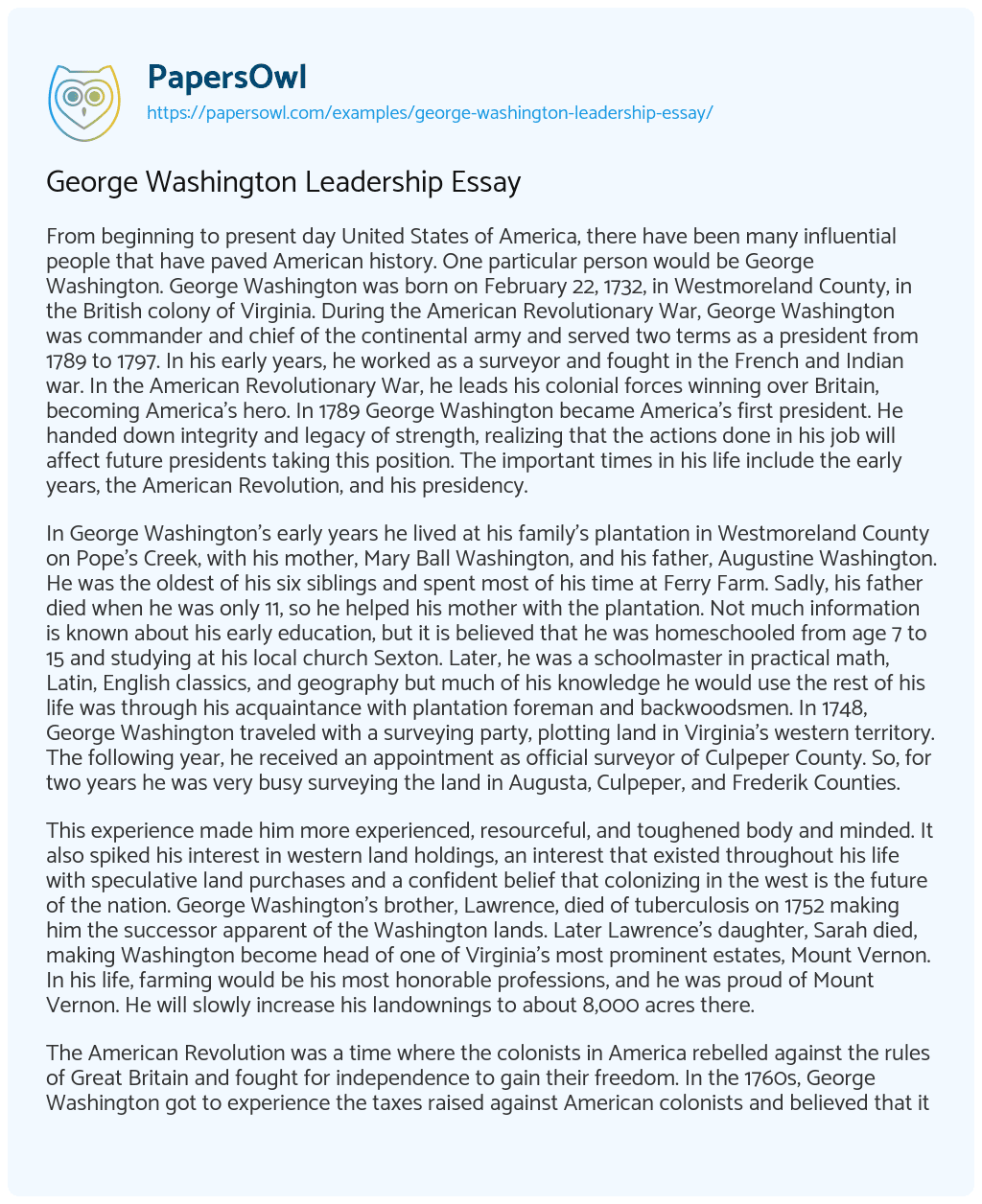 From beginning to present day United States of America, there have been many influential people that have paved American history. One particular person would be George Washington. George Washington was born on February 22, 1732, in Westmoreland County, in the British colony of Virginia. During the American Revolutionary War, George Washington was commander and chief of the continental army and served two terms as a president from 1789 to 1797. In his early years, he worked as a surveyor and fought in the French and Indian war. In the American Revolutionary War, he leads his colonial forces winning over Britain, becoming America’s hero. In 1789 George Washington became America’s first president. He handed down integrity and legacy of strength, realizing that the actions done in his job will affect future presidents taking this position. The important times in his life include the early years, the American Revolution, and his presidency.

In George Washington’s early years he lived at his family’s plantation in Westmoreland County on Pope’s Creek, with his mother, Mary Ball Washington, and his father, Augustine Washington. He was the oldest of his six siblings and spent most of his time at Ferry Farm. Sadly, his father died when he was only 11, so he helped his mother with the plantation. Not much information is known about his early education, but it is believed that he was homeschooled from age 7 to 15 and studying at his local church Sexton. Later, he was a schoolmaster in practical math, Latin, English classics, and geography but much of his knowledge he would use the rest of his life was through his acquaintance with plantation foreman and backwoodsmen. In 1748, George Washington traveled with a surveying party, plotting land in Virginia’s western territory. The following year, he received an appointment as official surveyor of Culpeper County. So, for two years he was very busy surveying the land in Augusta, Culpeper, and Frederik Counties.

This experience made him more experienced, resourceful, and toughened body and minded. It also spiked his interest in western land holdings, an interest that existed throughout his life with speculative land purchases and a confident belief that colonizing in the west is the future of the nation. George Washington’s brother, Lawrence, died of tuberculosis on 1752 making him the successor apparent of the Washington lands. Later Lawrence’s daughter, Sarah died, making Washington become head of one of Virginia’s most prominent estates, Mount Vernon. In his life, farming would be his most honorable professions, and he was proud of Mount Vernon. He will slowly increase his landownings to about 8,000 acres there.

The American Revolution was a time where the colonists in America rebelled against the rules of Great Britain and fought for independence to gain their freedom. In the 1760s, George Washington got to experience the taxes raised against American colonists and believed that it was in the interests of the colonists to declare independence from England. In 1774 in Philadelphia, Washington served as a delegate to the first continental congress. Washington was named commander in chief of the Continental Army around the time the Second Continental Congress convened.

Amazingly, George Washington proved to an even better general than the military strategists. His troops were unfortunately poorly trained and lacked ammunition, food and other materials. However, as an incredible general George Washington was, he gave them motivation and direction to keep moving forward. Throughout the eight-year war, the colonial forces won a few battles, but the British were winning more. In October 1781, under General Charles Cornwallis the continental forces and some French captured the British troops in Yorktown, Virginia. This capture effectively ended the Revolutionary War declaring Washington, a national hero.

George Washington was one of the founding fathers of the United States and served as the nation’s first president. In 1783, with a peace treaty that was finally signed between the U.S. and Great Britain, George Washington felt like he did his duty and returned to Mount Vernon giving up his job in the army, he wanted to resume his life as a family man and a farmer. However, because of his impressive leadership, he was asked to come to a constitutional convention in Philadelphia and lead the committee to draft the new constitution. The delegates believed that he was perfectly qualified to become the nation’s first president.

At first, Washington was unwilling to do it because he wanted to return to a quiet life as a family man and farmer. But the public opinion eventually made Washington give in. January 7, 1789, one of the most important days in our nation, the first presidential election was held, and Washington won. John Adams became the first vice president receiving the second-largest amount of votes. Because Washington, D.C., was not yet built, he was inaugurated on April 30, 1789, in New York City. As president Washington worked hard to set an example of prudence, fairness, and integrity to set an example for future presidents.

Therefore, George Washington served a great life serving as the first president of the United States of America and lead an army against the British. He was educated well at the time as a homeschooler, later becoming a schoolmaster in practical math, Latin, English classics, and geography. He was then was named commander in chief of the Continental Army leading the colonist’s victory over the British. He served as the nations first president of the United States because of public opinion, leading a great presidency. He was a man who worked for his country well and in his life. Because of George Washington, we have America.