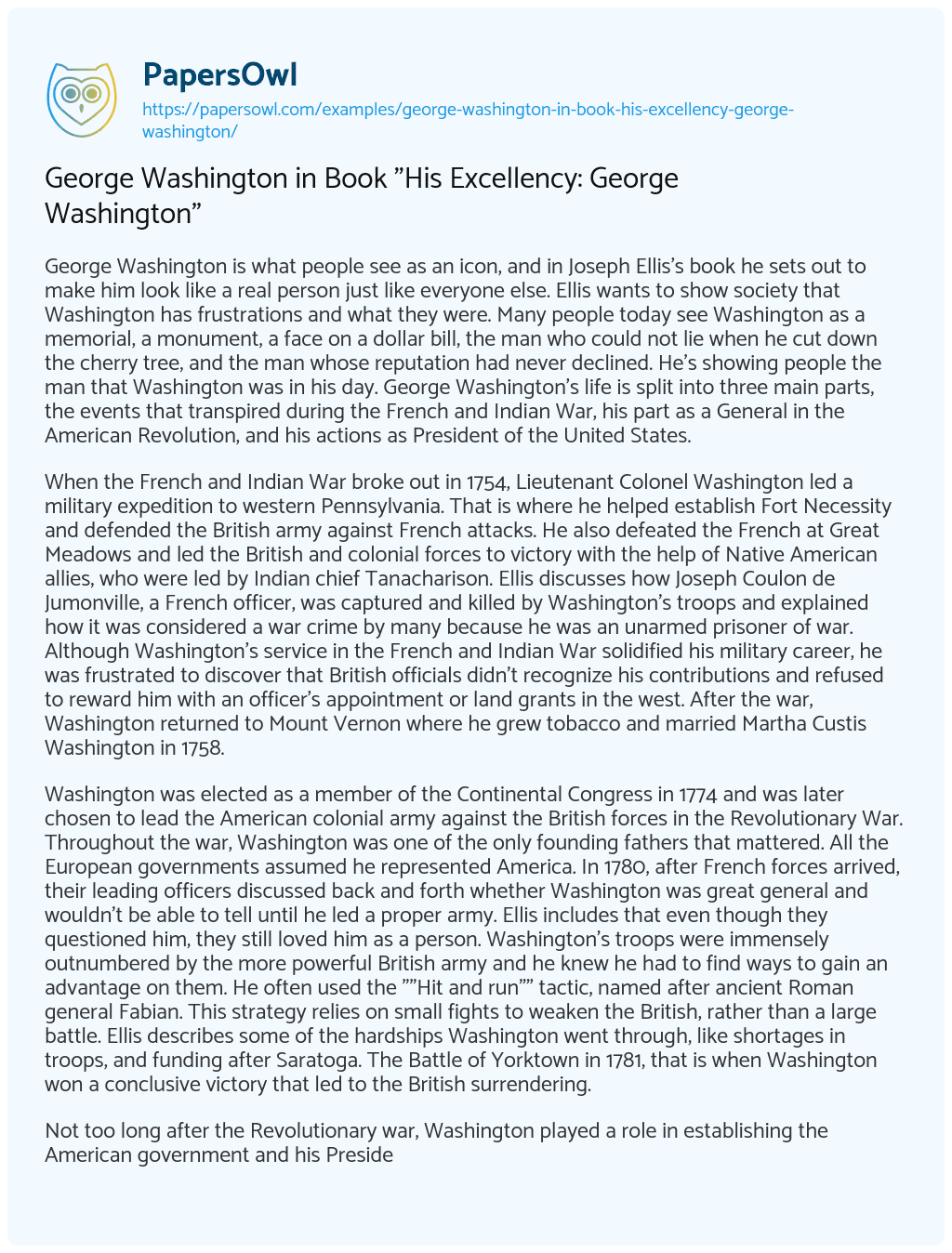 George Washington is what people see as an icon, and in Joseph Ellis’s book he sets out to make him look like a real person just like everyone else. Ellis wants to show society that Washington has frustrations and what they were. Many people today see Washington as a memorial, a monument, a face on a dollar bill, the man who could not lie when he cut down the cherry tree, and the man whose reputation had never declined. He’s showing people the man that Washington was in his day. George Washington’s life is split into three main parts, the events that transpired during the French and Indian War, his part as a General in the American Revolution, and his actions as President of the United States.

When the French and Indian War broke out in 1754, Lieutenant Colonel Washington led a military expedition to western Pennsylvania. That is where he helped establish Fort Necessity and defended the British army against French attacks. He also defeated the French at Great Meadows and led the British and colonial forces to victory with the help of Native American allies, who were led by Indian chief Tanacharison. Ellis discusses how Joseph Coulon de Jumonville, a French officer, was captured and killed by Washington’s troops and explained how it was considered a war crime by many because he was an unarmed prisoner of war. Although Washington’s service in the French and Indian War solidified his military career, he was frustrated to discover that British officials didn’t recognize his contributions and refused to reward him with an officer’s appointment or land grants in the west. After the war, Washington returned to Mount Vernon where he grew tobacco and married Martha Custis Washington in 1758.

Washington was elected as a member of the Continental Congress in 1774 and was later chosen to lead the American colonial army against the British forces in the Revolutionary War. Throughout the war, Washington was one of the only founding fathers that mattered. All the European governments assumed he represented America. In 1780, after French forces arrived, their leading officers discussed back and forth whether Washington was great general and wouldn’t be able to tell until he led a proper army. Ellis includes that even though they questioned him, they still loved him as a person. Washington’s troops were immensely outnumbered by the more powerful British army and he knew he had to find ways to gain an advantage on them. He often used the “”Hit and run”” tactic, named after ancient Roman general Fabian. This strategy relies on small fights to weaken the British, rather than a large battle. Ellis describes some of the hardships Washington went through, like shortages in troops, and funding after Saratoga. The Battle of Yorktown in 1781, that is when Washington won a conclusive victory that led to the British surrendering.

Not too long after the Revolutionary war, Washington played a role in establishing the American government and his Presidency. He favored a strong national government and defended Congress’s rights, as well giving the president right to veto. As the first President of the United States, he decided to choose cabinet members based on quality rather than favoritism. He strongly disagreed to have political parties and believed them to later cause conflict, which he had made clear in his Farewell Address. Despite his wishes, the two-party system eventually formed because of economical and regional controversy.