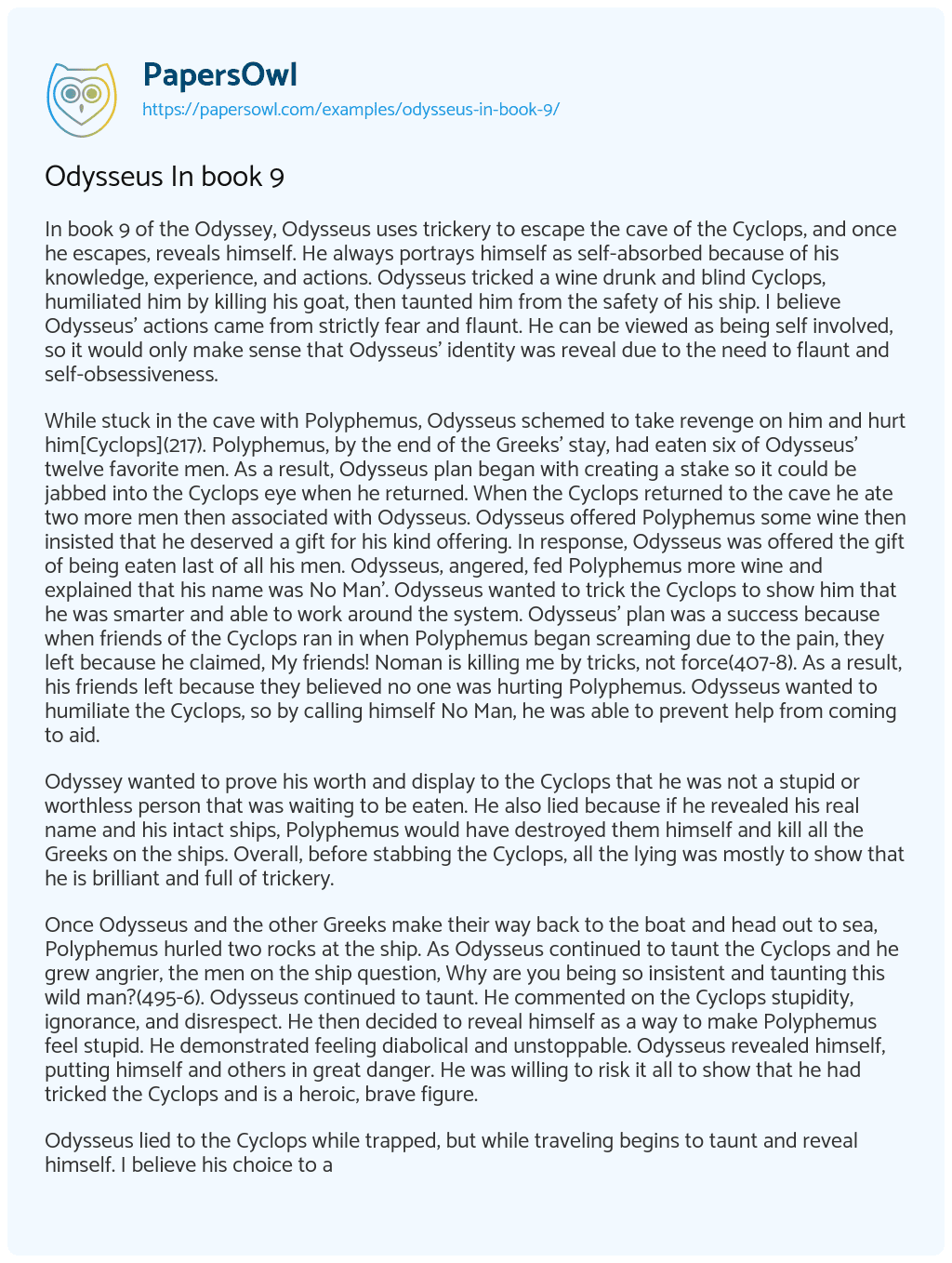 In book 9 of the Odyssey, Odysseus uses trickery to escape the cave of the Cyclops, and once he escapes, reveals himself. He always portrays himself as self-absorbed because of his knowledge, experience, and actions. Odysseus tricked a wine drunk and blind Cyclops, humiliated him by killing his goat, then taunted him from the safety of his ship. I believe Odysseus’ actions came from strictly fear and flaunt. He can be viewed as being self involved, so it would only make sense that Odysseus’ identity was reveal due to the need to flaunt and self-obsessiveness.

While stuck in the cave with Polyphemus, Odysseus schemed to take revenge on him and hurt him[Cyclops](217). Polyphemus, by the end of the Greeks’ stay, had eaten six of Odysseus’ twelve favorite men. As a result, Odysseus plan began with creating a stake so it could be jabbed into the Cyclops eye when he returned. When the Cyclops returned to the cave he ate two more men then associated with Odysseus. Odysseus offered Polyphemus some wine then insisted that he deserved a gift for his kind offering. In response, Odysseus was offered the gift of being eaten last of all his men. Odysseus, angered, fed Polyphemus more wine and explained that his name was No Man’. Odysseus wanted to trick the Cyclops to show him that he was smarter and able to work around the system. Odysseus’ plan was a success because when friends of the Cyclops ran in when Polyphemus began screaming due to the pain, they left because he claimed, My friends! Noman is killing me by tricks, not force(407-8). As a result, his friends left because they believed no one was hurting Polyphemus. Odysseus wanted to humiliate the Cyclops, so by calling himself No Man, he was able to prevent help from coming to aid.

Odyssey wanted to prove his worth and display to the Cyclops that he was not a stupid or worthless person that was waiting to be eaten. He also lied because if he revealed his real name and his intact ships, Polyphemus would have destroyed them himself and kill all the Greeks on the ships. Overall, before stabbing the Cyclops, all the lying was mostly to show that he is brilliant and full of trickery.

Once Odysseus and the other Greeks make their way back to the boat and head out to sea, Polyphemus hurled two rocks at the ship. As Odysseus continued to taunt the Cyclops and he grew angrier, the men on the ship question, Why are you being so insistent and taunting this wild man?(495-6). Odysseus continued to taunt. He commented on the Cyclops stupidity, ignorance, and disrespect. He then decided to reveal himself as a way to make Polyphemus feel stupid. He demonstrated feeling diabolical and unstoppable. Odysseus revealed himself, putting himself and others in great danger. He was willing to risk it all to show that he had tricked the Cyclops and is a heroic, brave figure.

Odysseus lied to the Cyclops while trapped, but while traveling begins to taunt and reveal himself. I believe his choice to act this way was due to his need to show everyone that he is the best. By lying to the Cyclops, he claimed to have tricked him and made the playing fields even–his eye for Odysseus’ men. On the ship, he insulted the Cyclops and revealed his real name as a way to flaunt and make the Cyclops feel foolish. Personally, I believe that Odysseus did not truly believe that his plan would work, so the foolishness he displayed on the boat was giddiness from the secret disbelief that he would successfully escape.