The Book Thief Themes and Sacrifice 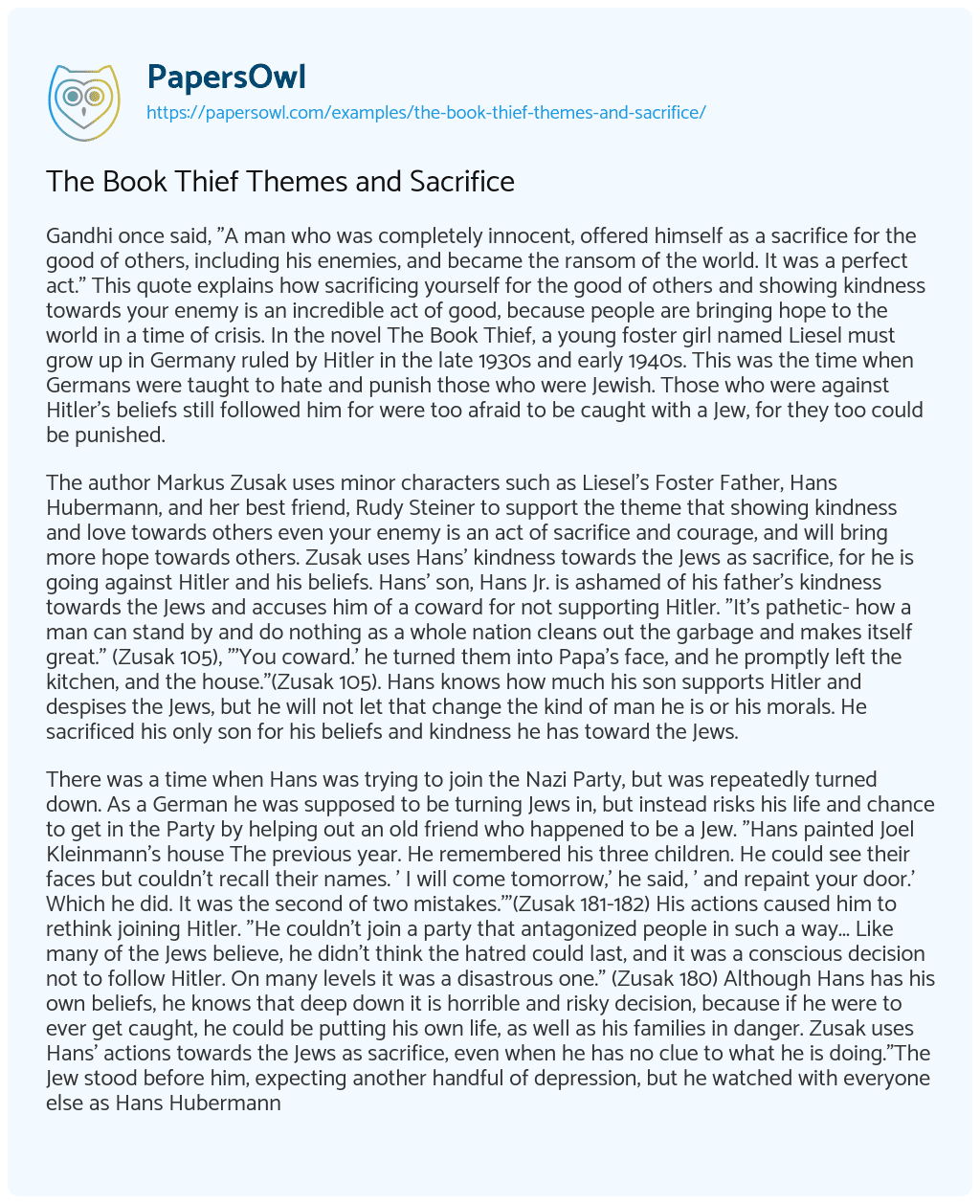 Gandhi once said, “A man who was completely innocent, offered himself as a sacrifice for the good of others, including his enemies, and became the ransom of the world. It was a perfect act.” This quote explains how sacrificing yourself for the good of others and showing kindness towards your enemy is an incredible act of good, because people are bringing hope to the world in a time of crisis. In the novel The Book Thief, a young foster girl named Liesel must grow up in Germany ruled by Hitler in the late 1930s and early 1940s. This was the time when Germans were taught to hate and punish those who were Jewish. Those who were against Hitler’s beliefs still followed him for were too afraid to be caught with a Jew, for they too could be punished.

The author Markus Zusak uses minor characters such as Liesel’s Foster Father, Hans Hubermann, and her best friend, Rudy Steiner to support the theme that showing kindness and love towards others even your enemy is an act of sacrifice and courage, and will bring more hope towards others. Zusak uses Hans’ kindness towards the Jews as sacrifice, for he is going against Hitler and his beliefs. Hans’ son, Hans Jr. is ashamed of his father’s kindness towards the Jews and accuses him of a coward for not supporting Hitler. “It’s pathetic- how a man can stand by and do nothing as a whole nation cleans out the garbage and makes itself great.” (Zusak 105), “‘You coward.’ he turned them into Papa’s face, and he promptly left the kitchen, and the house.”(Zusak 105). Hans knows how much his son supports Hitler and despises the Jews, but he will not let that change the kind of man he is or his morals. He sacrificed his only son for his beliefs and kindness he has toward the Jews.

There was a time when Hans was trying to join the Nazi Party, but was repeatedly turned down. As a German he was supposed to be turning Jews in, but instead risks his life and chance to get in the Party by helping out an old friend who happened to be a Jew. “Hans painted Joel Kleinmann’s house The previous year. He remembered his three children. He could see their faces but couldn’t recall their names. ‘ I will come tomorrow,’ he said, ‘ and repaint your door.’ Which he did. It was the second of two mistakes.'”(Zusak 181-182) His actions caused him to rethink joining Hitler. “He couldn’t join a party that antagonized people in such a way… Like many of the Jews believe, he didn’t think the hatred could last, and it was a conscious decision not to follow Hitler. On many levels it was a disastrous one.” (Zusak 180) Although Hans has his own beliefs, he knows that deep down it is horrible and risky decision, because if he were to ever get caught, he could be putting his own life, as well as his families in danger. Zusak uses Hans’ actions towards the Jews as sacrifice, even when he has no clue to what he is doing.”The Jew stood before him, expecting another handful of depression, but he watched with everyone else as Hans Hubermann held his hand out and presented a piece of bread, like magic.” (Zusak 394) ” Wading through, a soldier was soon at the scene of the crime…. The Jew was whipped six times. On his back, his head and his legs. ‘ You filth! You swine!’ Blood dripped now from his ear. Then it was Papa’s turn.”(Zusak 394).

When Hans sees Jews being marched through town on their way to a concentration camp he can not help but offer his help towards a dying man, and is whipped by a soldier for doing so. ” Liesel watched. With tears in her eyes, she saw the man slide farther forward, pushing Papa back to cry into his ankles.”(Zusak 394). His actions surprised everyone including Liesel, but inspired her to be good to others. “What was I thinking?’ His eyes closed tighter and opened again…. ‘ Oh my God, Liesel, what have I done?’ What had Papa done?”(Zusak 396) After being punished Hans was terribly confused on why he did what he. Although Hans is confused towards the actions he has made, it creates irony towards the readers because, Hans has shown kindness and love towards so many including the Jews, that it was only a force of habit to why he did what he did. The first action he made was when he invited a Jew into his home. “Do you still play the accordion?’ Of course, the question was really, ‘ will you still help me?’ Liesel’s Papa walk to the front door and opened it. Cautiously, he looked outside, each way, and returned.

The verdict was ” nothing”. Max Vandenburg, the Jew, closed his eyes and dropped a little further into safety. The very idea of it was ludicrous, but he accepted it and boneless.”(Zusak 185) “Max made his way to Munich and Molching, and now he sat in a strangers kitchen, asking for the help he craved and suffering the condemnation he felt he deserved. Hans Hubermann shook his hand and introduced himself.”(Zusak 196) When he fought in WWI he was saved by a man named Eric who died saving Hans’ life, so decided to repay that man by saving his son Max who is a wanted Jew. Once again Hans has sacrificed his life along with his families, by putting others needs before his, as an act of loyalty towards a friend, but hope and kindness to a stranger. The author Zusak puts courage and sacrifce into Rudy’s love for Liesel. He helps her steal books, adds to why she is called ‘The Book Thief’, keeps the secrets she tells him, and can not ask questions about anything, even if the reason is not fully explained. He has complete trust with Liesel and is risking his life, to help steal books, because that is illegal. “‘All he wanted was a small scrap of triumph, and he was determined to get it.'”(Zusak 283)”I need a win, Liesel.

Honestly. Liesel new. She’d have gone closer but for the smell of him. Stealing. He had to steal something. No. They had to steal something back. It didn’t matter what. It needed only to be soon.” (Zusak 283 and 284) Rudy felt like he hasn’t had a win in a while so when he gets the opportunity to help Liesel with stealing from the mayor’s wife he will gladly do so. ” ‘Just wait,’ and he hurried back around the corner. ‘ Don’t get caught,’ Liesel called after him, but he didn’t hear.'” (Zusak 290) When Rudy and Liesel came back from stealing, he forgot her shoes, and went back to get them even though it meant he might get caught. When it comes to Liesel, Rudy has no time for hesitation, he knows he could be punished for his actions, but when his friend needs him he will not say no, for he too puts other needs before his. Throughout this novel Germans were taught to hate and mistreat those who were against Hitler especially the Jews.

Minor characters like Hans Hubermann and Rudy Steiner supported his theme that showing kindness and love towards others, even your enemies is an act of great courage and sacrifice, and can bring hope towards others especially during a time of crisis, or in this novel war. As Gandhi once said, “A man who was completely innocent, offered himself as a sacrifice for the good of others, including his enemies, and became the ransom of the world. It was a perfect act.”. For it is not horrible to go against others beliefs as you stand by your own cause showing kindness towards others will bring great hope to the world.

The Book Thief Themes and Sacrifice. (2019, Dec 11). Retrieved from https://papersowl.com/examples/the-book-thief-themes-and-sacrifice/