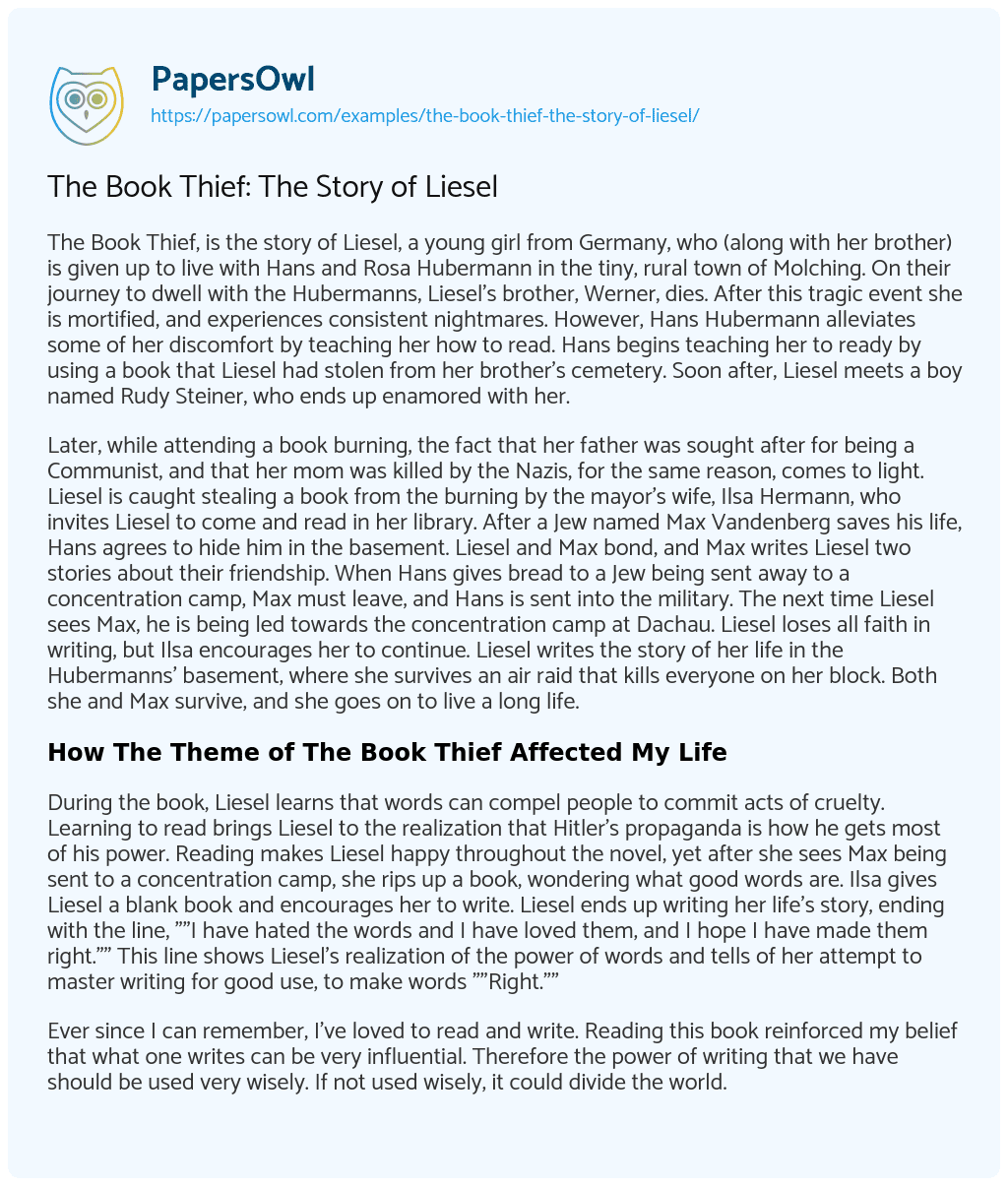 The Book Thief, is the story of Liesel, a young girl from Germany, who (along with her brother) is given up to live with Hans and Rosa Hubermann in the tiny, rural town of Molching. On their journey to dwell with the Hubermanns, Liesel’s brother, Werner, dies. After this tragic event she is mortified, and experiences consistent nightmares. However, Hans Hubermann alleviates some of her discomfort by teaching her how to read. Hans begins teaching her to ready by using a book that Liesel had stolen from her brother’s cemetery. Soon after, Liesel meets a boy named Rudy Steiner, who ends up enamored with her.

Later, while attending a book burning, the fact that her father was sought after for being a Communist, and that her mom was killed by the Nazis, for the same reason, comes to light. Liesel is caught stealing a book from the burning by the mayor’s wife, Ilsa Hermann, who invites Liesel to come and read in her library. After a Jew named Max Vandenberg saves his life, Hans agrees to hide him in the basement. Liesel and Max bond, and Max writes Liesel two stories about their friendship. When Hans gives bread to a Jew being sent away to a concentration camp, Max must leave, and Hans is sent into the military. The next time Liesel sees Max, he is being led towards the concentration camp at Dachau. Liesel loses all faith in writing, but Ilsa encourages her to continue. Liesel writes the story of her life in the Hubermanns’ basement, where she survives an air raid that kills everyone on her block. Both she and Max survive, and she goes on to live a long life.

How The Theme of The Book Thief Affected My Life

During the book, Liesel learns that words can compel people to commit acts of cruelty. Learning to read brings Liesel to the realization that Hitler’s propaganda is how he gets most of his power. Reading makes Liesel happy throughout the novel, yet after she sees Max being sent to a concentration camp, she rips up a book, wondering what good words are. Ilsa gives Liesel a blank book and encourages her to write. Liesel ends up writing her life’s story, ending with the line, “”I have hated the words and I have loved them, and I hope I have made them right.”” This line shows Liesel’s realization of the power of words and tells of her attempt to master writing for good use, to make words “”Right.””

Ever since I can remember, I’ve loved to read and write. Reading this book reinforced my belief that what one writes can be very influential. Therefore the power of writing that we have should be used very wisely. If not used wisely, it could divide the world.

The Book Thief: The Story of Liesel. (2019, Jan 08). Retrieved from https://papersowl.com/examples/the-book-thief-the-story-of-liesel/