“All Quiet on the Western Front” Novel Analysis 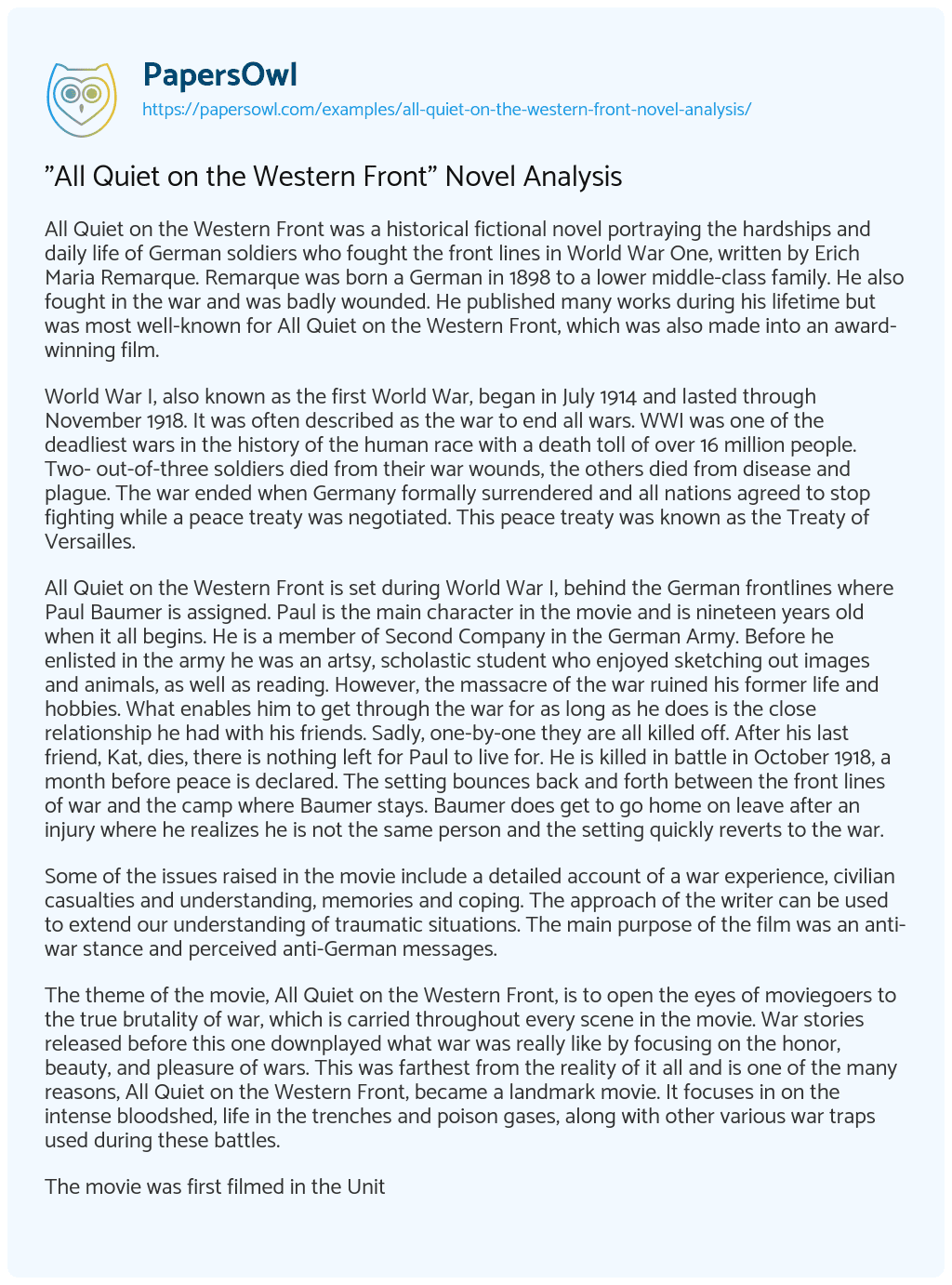 All Quiet on the Western Front was a historical fictional novel portraying the hardships and daily life of German soldiers who fought the front lines in World War One, written by Erich Maria Remarque. Remarque was born a German in 1898 to a lower middle-class family. He also fought in the war and was badly wounded. He published many works during his lifetime but was most well-known for All Quiet on the Western Front, which was also made into an award- winning film.

World War I, also known as the first World War, began in July 1914 and lasted through November 1918. It was often described as the war to end all wars. WWI was one of the deadliest wars in the history of the human race with a death toll of over 16 million people. Two- out-of-three soldiers died from their war wounds, the others died from disease and plague. The war ended when Germany formally surrendered and all nations agreed to stop fighting while a peace treaty was negotiated. This peace treaty was known as the Treaty of Versailles.

All Quiet on the Western Front is set during World War I, behind the German frontlines where Paul Baumer is assigned. Paul is the main character in the movie and is nineteen years old when it all begins. He is a member of Second Company in the German Army. Before he enlisted in the army he was an artsy, scholastic student who enjoyed sketching out images and animals, as well as reading. However, the massacre of the war ruined his former life and hobbies. What enables him to get through the war for as long as he does is the close relationship he had with his friends. Sadly, one-by-one they are all killed off. After his last friend, Kat, dies, there is nothing left for Paul to live for. He is killed in battle in October 1918, a month before peace is declared. The setting bounces back and forth between the front lines of war and the camp where Baumer stays. Baumer does get to go home on leave after an injury where he realizes he is not the same person and the setting quickly reverts to the war.

Some of the issues raised in the movie include a detailed account of a war experience, civilian casualties and understanding, memories and coping. The approach of the writer can be used to extend our understanding of traumatic situations. The main purpose of the film was an anti-war stance and perceived anti-German messages.

The theme of the movie, All Quiet on the Western Front, is to open the eyes of moviegoers to the true brutality of war, which is carried throughout every scene in the movie. War stories released before this one downplayed what war was really like by focusing on the honor, beauty, and pleasure of wars. This was farthest from the reality of it all and is one of the many reasons, All Quiet on the Western Front, became a landmark movie. It focuses in on the intense bloodshed, life in the trenches and poison gases, along with other various war traps used during these battles.

The movie was first filmed in the United States in the state of California in 1930. Then in 1979, the film was re-recorded in the Czech Republic. Some of the all-star cast included Ernest Borgnine and Richard Thomas. Considering this was a made for TV film, it was quite an astonishing and incredibly authentic portrayal of the horrors of combat in WWI. Technically, there are some flaws in the directing. Flashback scenes are thrust upon the viewer without the slightest warning, which in parts, makes it confusing to distinguish past and present for a few moments.

The symbolism portrayed in the movie is limited, but one important symbol are the boots of a soldier named Kemmerich. These tall, pliant boots are passed from soldier to soldier as each owner dies in sequence. Kemmerich himself took them from the body of a dead soldier, and as he lied on his own deathbed, another soldier immediately begins acquiring them. In this way, the boots represent the relatively low value of human life in the war. A good pair of boots is more valuable than that of a human life. The question of who will inherit them continually overshadows their owners’ deaths.

The movie ends in October of 1918, on a day with very little fighting, when Paul is killed. The army report for that day reads: “All quiet on the Western Front.” This is the sentence that will echo in our heads for ages to come. It was the first true glimpse at what wartime life was like for the millions who perished unnecessarily. After Paul dies the camera focuses in on his face where he is wearing a calm expression, as though he is relieved that the end has come at last. This is the story of innocence lost, of life and the unbelievable changes that occur when a person is exposed to death on the scale that WWI produced. May no man ever know this change again so long as we all shall live.

"All Quiet on the Western Front" Novel Analysis. (2019, Oct 09). Retrieved from https://papersowl.com/examples/all-quiet-on-the-western-front-novel-analysis/

Character Analysis of all Quiet on the Western Front

Mechanized Warfare, Battle Scars, and all Quiet on the Western Front

All Quiet on the Western Front Assignment