Pearl Harbor Address to the Nation 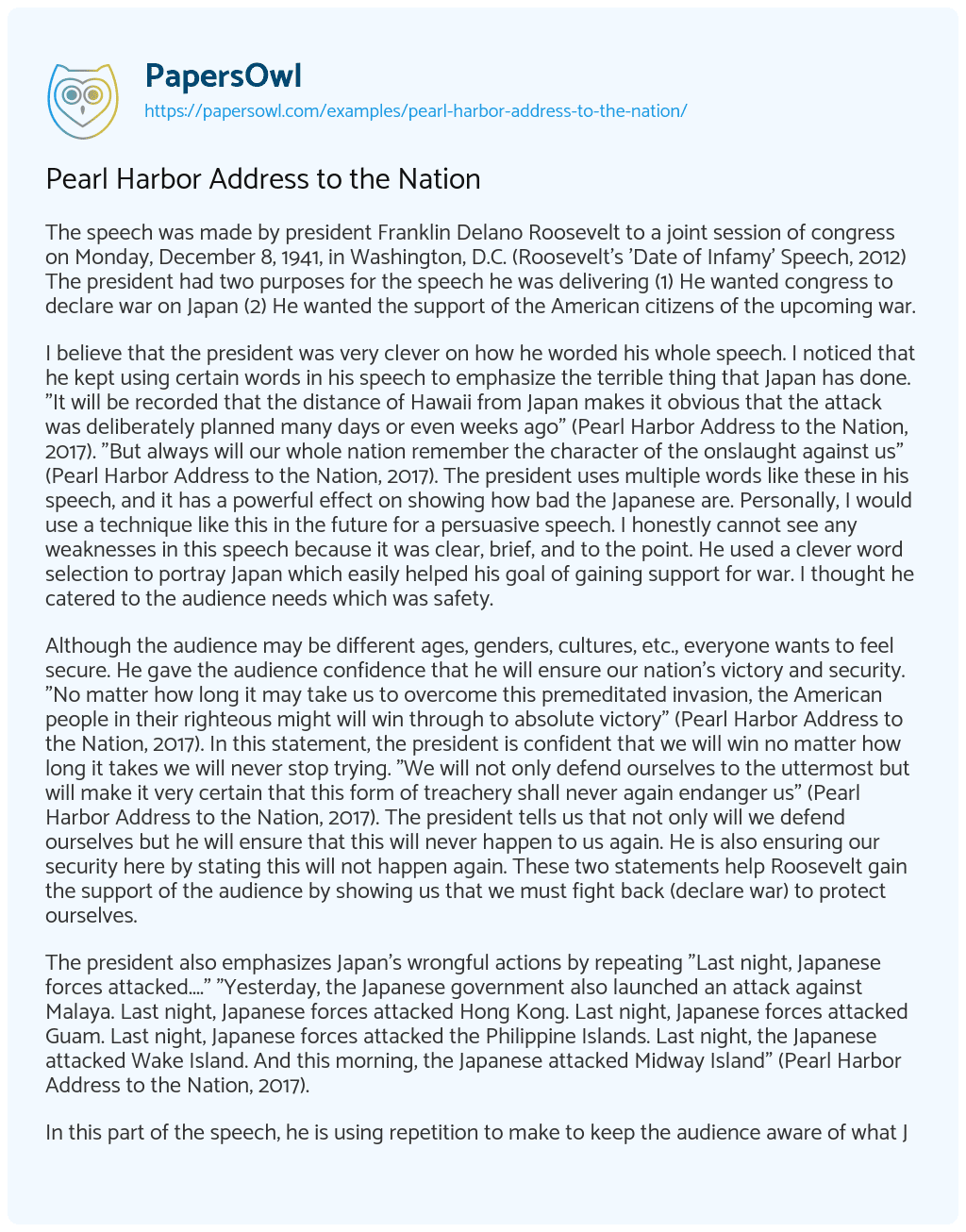 The speech was made by president Franklin Delano Roosevelt to a joint session of congress on Monday, December 8, 1941, in Washington, D.C. (Roosevelt’s ‘Date of Infamy’ Speech, 2012) The president had two purposes for the speech he was delivering (1) He wanted congress to declare war on Japan (2) He wanted the support of the American citizens of the upcoming war.

I believe that the president was very clever on how he worded his whole speech. I noticed that he kept using certain words in his speech to emphasize the terrible thing that Japan has done. “It will be recorded that the distance of Hawaii from Japan makes it obvious that the attack was deliberately planned many days or even weeks ago” (Pearl Harbor Address to the Nation, 2017). “But always will our whole nation remember the character of the onslaught against us” (Pearl Harbor Address to the Nation, 2017). The president uses multiple words like these in his speech, and it has a powerful effect on showing how bad the Japanese are. Personally, I would use a technique like this in the future for a persuasive speech. I honestly cannot see any weaknesses in this speech because it was clear, brief, and to the point. He used a clever word selection to portray Japan which easily helped his goal of gaining support for war. I thought he catered to the audience needs which was safety.

Although the audience may be different ages, genders, cultures, etc., everyone wants to feel secure. He gave the audience confidence that he will ensure our nation’s victory and security. “No matter how long it may take us to overcome this premeditated invasion, the American people in their righteous might will win through to absolute victory” (Pearl Harbor Address to the Nation, 2017). In this statement, the president is confident that we will win no matter how long it takes we will never stop trying. “We will not only defend ourselves to the uttermost but will make it very certain that this form of treachery shall never again endanger us” (Pearl Harbor Address to the Nation, 2017). The president tells us that not only will we defend ourselves but he will ensure that this will never happen to us again. He is also ensuring our security here by stating this will not happen again. These two statements help Roosevelt gain the support of the audience by showing us that we must fight back (declare war) to protect ourselves.

In this part of the speech, he is using repetition to make to keep the audience aware of what Japan has done. Using repetition to show the audience what other countries Japan has affected was a great way of getting the audience to remember what he said. This part of the speech was the only part that I remembered word for word because of his clever use of repetition. If he had just listed each country that was affected in one sentence, I don’t think it would have had a stronger effect. He also got the audience emotionally involved (Pathos) because he used his listeners basic needs and motives (Maslow’s Hierarchy of Needs), and he used that to his advantage. Discovering your audiences’ basic needs and motives is an essential part of audience analysis and adapting your speech to your audience’s wants and needs (Hamilton, 2015).

“There is no blinking fact that our people, our territory and our interest are in grave danger” (Pearl Harbor Address to the Nation, 2017). He is catering to the audience’s safety needs, and he comes up with the solution of declaring war to ensure the American people’s safety. Safety needs that fall into this category are protection from injury, poor health, harm, or death, and freedom from fear. He also catered to the audiences one big value as well which would be national security. National security falls into the top 18 key terminal values in America (Hamilton, 2015). Here is the link to the speech: https://www.americanrhetoric.com/speeches/fdrpearlharbor.htm

Pearl Harbor Address to the Nation. (2019, Aug 02). Retrieved from https://papersowl.com/examples/pearl-harbor-address-to-the-nation/