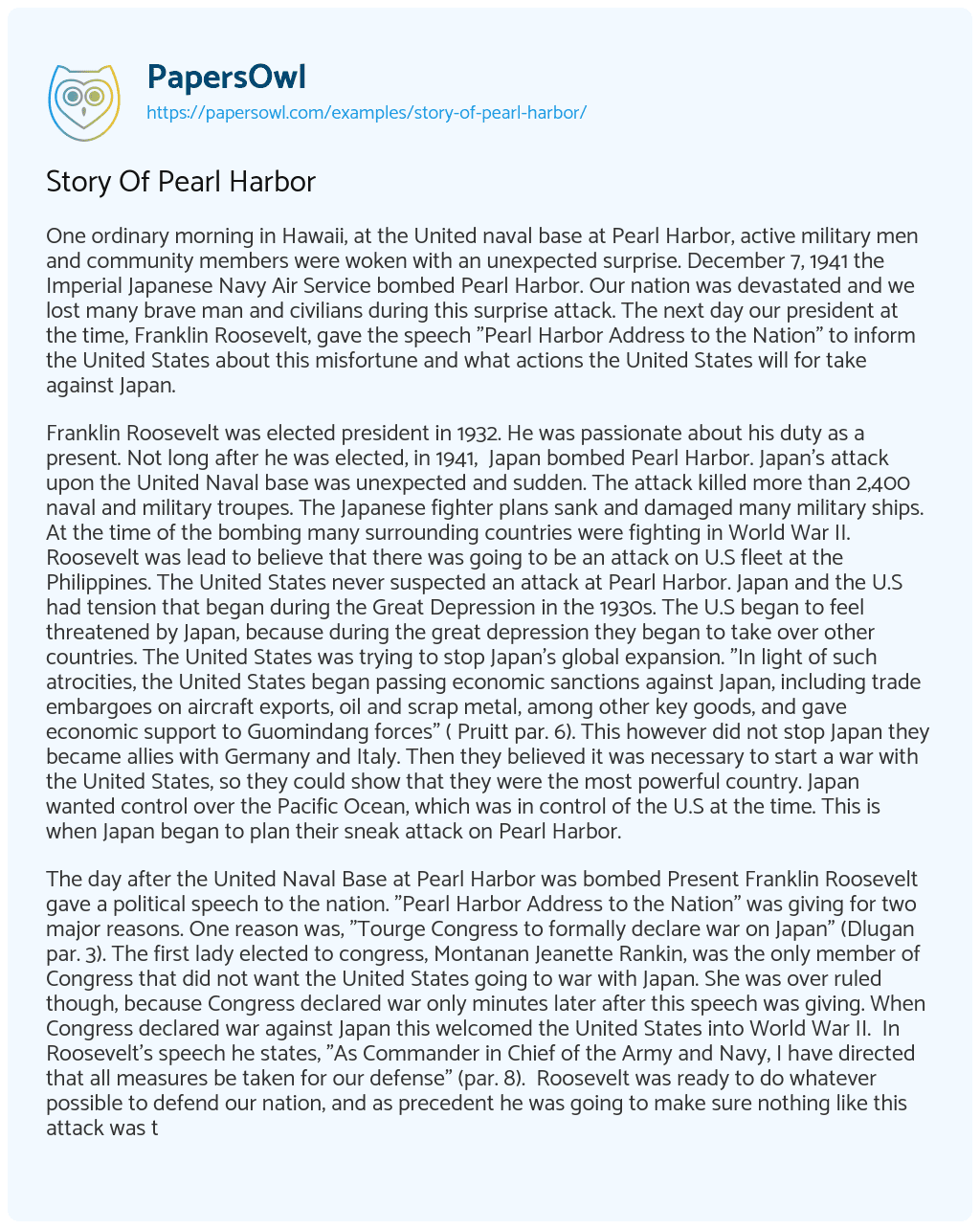 One ordinary morning in Hawaii, at the United naval base at Pearl Harbor, active military men and community members were woken with an unexpected surprise. December 7, 1941 the Imperial Japanese Navy Air Service bombed Pearl Harbor. Our nation was devastated and we lost many brave man and civilians during this surprise attack. The next day our president at the time, Franklin Roosevelt, gave the speech “Pearl Harbor Address to the Nation” to inform the United States about this misfortune and what actions the United States will for take against Japan.

Franklin Roosevelt was elected president in 1932. He was passionate about his duty as a present. Not long after he was elected, in 1941,  Japan bombed Pearl Harbor. Japan’s attack upon the United Naval base was unexpected and sudden. The attack killed more than 2,400 naval and military troupes. The Japanese fighter plans sank and damaged many military ships. At the time of the bombing many surrounding countries were fighting in World War II. Roosevelt was lead to believe that there was going to be an attack on U.S fleet at the Philippines. The United States never suspected an attack at Pearl Harbor. Japan and the U.S  had tension that began during the Great Depression in the 1930s. The U.S began to feel threatened by Japan, because during the great depression they began to take over other countries. The United States was trying to stop Japan’s global expansion. “In light of such atrocities, the United States began passing economic sanctions against Japan, including trade embargoes on aircraft exports, oil and scrap metal, among other key goods, and gave economic support to Guomindang forces” ( Pruitt par. 6). This however did not stop Japan they became allies with Germany and Italy. Then they believed it was necessary to start a war with the United States, so they could show that they were the most powerful country. Japan wanted control over the Pacific Ocean, which was in control of the U.S at the time. This is when Japan began to plan their sneak attack on Pearl Harbor.

The day after the United Naval Base at Pearl Harbor was bombed Present Franklin Roosevelt gave a political speech to the nation. “Pearl Harbor Address to the Nation” was giving for two major reasons. One reason was, “Tourge Congress to formally declare war on Japan” (Dlugan par. 3). The first lady elected to congress, Montanan Jeanette Rankin, was the only member of Congress that did not want the United States going to war with Japan. She was over ruled though, because Congress declared war only minutes later after this speech was giving. When Congress declared war against Japan this welcomed the United States into World War II.  In Roosevelt’s speech he states, “As Commander in Chief of the Army and Navy, I have directed that all measures be taken for our defense” (par. 8).  Roosevelt was ready to do whatever possible to defend our nation, and as precedent he was going to make sure nothing like this attack was to happen again. President Roosevelt was certain that our army would be able to win this war and rise above this hardship attack.

Once President Roosevelt was able to get congresses to declare war now he had “To rally the American people to support the war effort” (Dlugan par. 3). Many people back in the 1900’s did not support the war and did not want their nation involved. Franklin Roosevelt used a lot of emotional words in his speech. He spoke and said words like “tragic” and “deliberately”. He wanted to grab citizens attention on this important conflict. Roosevelt wanted to ignite Americans emotion about the war, and get them on board with the U.S entering World War II. The people of American were then determined to go to war. In Roosevelt’s speech he stated, “No matter how long it may take us to overcome this premeditated invasion, the American people in their righteous might will win through to absolute victory” (par. 9). American citizens: young business, labor, and farming women and men had to come together to create a strong military. These ordinary people were provided uniforms, guns, tanks, ships, war planes and other weapons. Citizens had to go through a process of recruitment, barracks life, the draft, and finally training for war. Soon America was ready to fight for there country.

The Japanese bombing Pearl Harbor was a complete surprise to all Americans. This devastating attack happened 77 years ago and is still brought up in history today. “Date which will live in infamy” ( Roosevelt par. 1). Roosevelt made sure that the people of the United States would remember this day throughout time (par. 8). The use of his powerful words made people remember the day December 7, 1941.

Roosevelt’s speech “Pearl Harbor Address to the Nation,” was an unforgettable speech in the 1900’s. He was ready to fight for our nation by convincing congress to declare war and for American citizens to agree. The bombing of Pearl Harbor changed our nation, and it will always be remembered. Also the lives that were lost in this tragic bombing will always and forever be remembered because of President Franklin Roosevelt’s powerful speech.

Pearl Harbor Address to the Nation