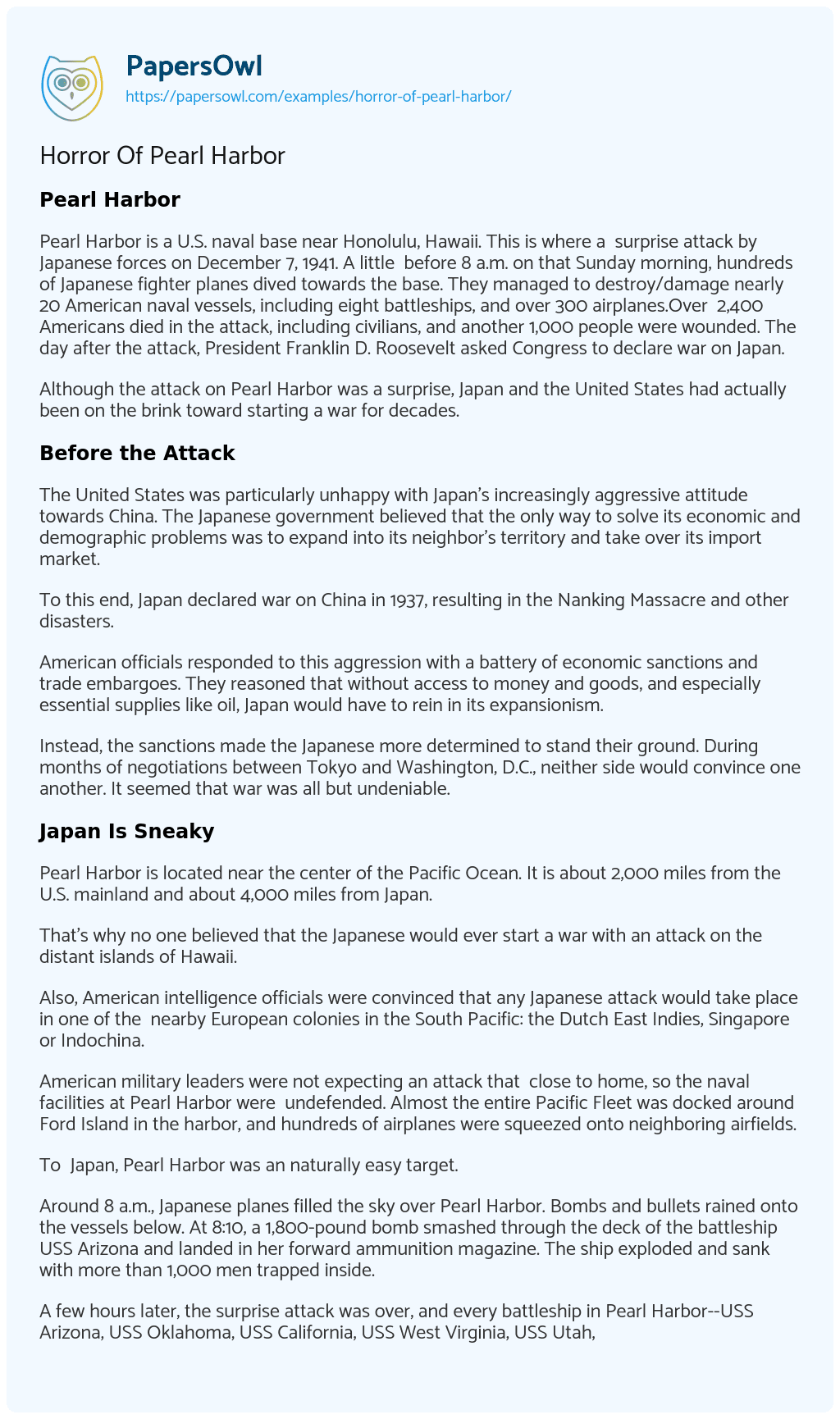 Pearl Harbor is a U.S. naval base near Honolulu, Hawaii. This is where a  surprise attack by Japanese forces on December 7, 1941. A little  before 8 a.m. on that Sunday morning, hundreds of Japanese fighter planes dived towards the base. They managed to destroy/damage nearly 20 American naval vessels, including eight battleships, and over 300 airplanes.Over  2,400 Americans died in the attack, including civilians, and another 1,000 people were wounded. The day after the attack, President Franklin D. Roosevelt asked Congress to declare war on Japan.

Although the attack on Pearl Harbor was a surprise, Japan and the United States had actually been on the brink toward starting a war for decades.

The United States was particularly unhappy with Japan’s increasingly aggressive attitude towards China. The Japanese government believed that the only way to solve its economic and demographic problems was to expand into its neighbor’s territory and take over its import market.

To this end, Japan declared war on China in 1937, resulting in the Nanking Massacre and other disasters.

American officials responded to this aggression with a battery of economic sanctions and trade embargoes. They reasoned that without access to money and goods, and especially essential supplies like oil, Japan would have to rein in its expansionism.

Instead, the sanctions made the Japanese more determined to stand their ground. During months of negotiations between Tokyo and Washington, D.C., neither side would convince one another. It seemed that war was all but undeniable.

That’s why no one believed that the Japanese would ever start a war with an attack on the distant islands of Hawaii.

Also, American intelligence officials were convinced that any Japanese attack would take place in one of the  nearby European colonies in the South Pacific: the Dutch East Indies, Singapore or Indochina.

American military leaders were not expecting an attack that  close to home, so the naval facilities at Pearl Harbor were  undefended. Almost the entire Pacific Fleet was docked around Ford Island in the harbor, and hundreds of airplanes were squeezed onto neighboring airfields.

To  Japan, Pearl Harbor was an naturally easy target.

Around 8 a.m., Japanese planes filled the sky over Pearl Harbor. Bombs and bullets rained onto the vessels below. At 8:10, a 1,800-pound bomb smashed through the deck of the battleship USS Arizona and landed in her forward ammunition magazine. The ship exploded and sank with more than 1,000 men trapped inside.

The Japanese attack on Pearl Harbor damaged or destroyed nearly 20 American ships and more than 300 airplanes. Dry docks and airfields were likewise destroyed. Most important, 2,403 sailors, soldiers and civilians were killed and about 1,000 people were wounded.

Moreover, the Pearl Harbor assault had left the base’s most important onshore facilities—oil storage depots, repair shops, shipyards and submarine docks. As a result, the U.S. Navy was able to bounce back really quickly from the attack.

President Franklin D. Roosevelt addressed a joint session of the U.S. Congress on December 8, the day after the crushing attack on Pearl Harbor.