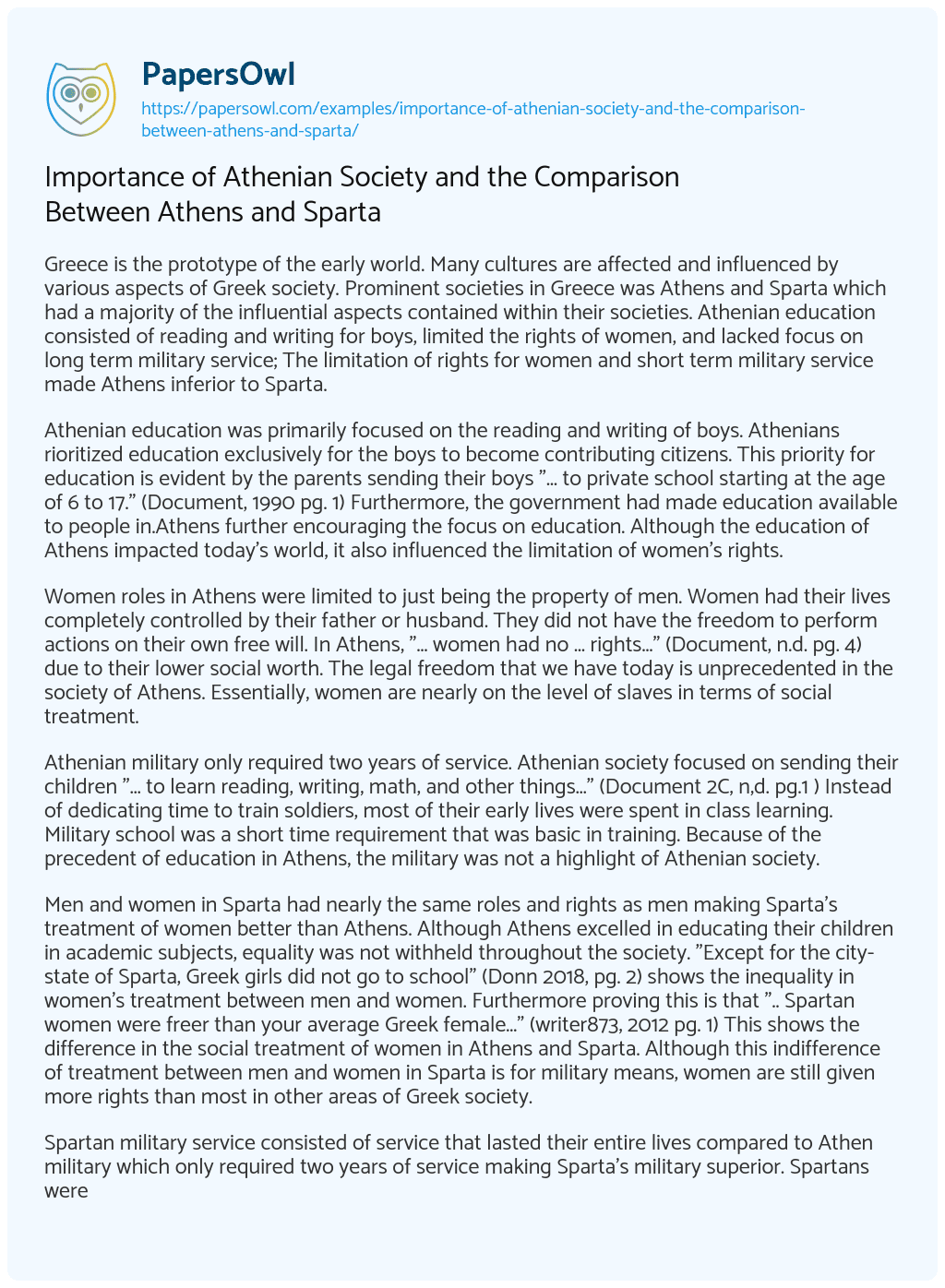 Greece is the prototype of the early world. Many cultures are affected and influenced by various aspects of Greek society. Prominent societies in Greece was Athens and Sparta which had a majority of the influential aspects contained within their societies. Athenian education consisted of reading and writing for boys, limited the rights of women, and lacked focus on long term military service; The limitation of rights for women and short term military service made Athens inferior to Sparta.

Athenian education was primarily focused on the reading and writing of boys. Athenians rioritized education exclusively for the boys to become contributing citizens. This priority for education is evident by the parents sending their boys “… to private school starting at the age of 6 to 17.” (Document, 1990 pg. 1) Furthermore, the government had made education available to people in.Athens further encouraging the focus on education. Although the education of Athens impacted today’s world, it also influenced the limitation of women’s rights.

Women roles in Athens were limited to just being the property of men. Women had their lives completely controlled by their father or husband. They did not have the freedom to perform actions on their own free will. In Athens, “… women had no … rights…” (Document, n.d. pg. 4) due to their lower social worth. The legal freedom that we have today is unprecedented in the society of Athens. Essentially, women are nearly on the level of slaves in terms of social treatment.

Athenian military only required two years of service. Athenian society focused on sending their children “… to learn reading, writing, math, and other things…” (Document 2C, n,d. pg.1 ) Instead of dedicating time to train soldiers, most of their early lives were spent in class learning. Military school was a short time requirement that was basic in training. Because of the precedent of education in Athens, the military was not a highlight of Athenian society.

Men and women in Sparta had nearly the same roles and rights as men making Sparta’s treatment of women better than Athens. Although Athens excelled in educating their children in academic subjects, equality was not withheld throughout the society. “Except for the city-state of Sparta, Greek girls did not go to school” (Donn 2018, pg. 2) shows the inequality in women’s treatment between men and women. Furthermore proving this is that “.. Spartan women were freer than your average Greek female…” (writer873, 2012 pg. 1) This shows the difference in the social treatment of women in Athens and Sparta. Although this indifference of treatment between men and women in Sparta is for military means, women are still given more rights than most in other areas of Greek society.

Spartan military service consisted of service that lasted their entire lives compared to Athen military which only required two years of service making Sparta’s military superior. Spartans were trained for military activities. This is shown by the Spartans being “…centered on warrior culture.” (History.com, 2009 pg. 6) This indicates of strong military values in Spartan society which allowed for the intensive military service required. On the other hand, Athenian military service only “… required to attend military school for two years…” (plaza.ufl.edu, n.d. pg. 3) This shows Athenians having less dedication to serving in their military and instead focusing on their passions in life. Spartans dedicate their lives on improving the military strength while Athenians dedicate their life time on their other passions.

Athenian society consisted of education, women’s rights, and military. Athenian education was primarily focused on educating boys in academics, women’s rights were limited to being property, and contained short term military service. Spartan society is superior due to the rights that women had and time dedicated to military service. Although the two societies were separated by the mountainous terrain, Sparta had superior aspects in its society when compared to the society of Athens. Sparta’s superiority in the aspects of treatment of women and military had resulted in the victory in the eventful Peloponnesian War.

Importance of Athenian Society and the Comparison Between Athens and Sparta. (2019, Apr 14). Retrieved from https://papersowl.com/examples/importance-of-athenian-society-and-the-comparison-between-athens-and-sparta/