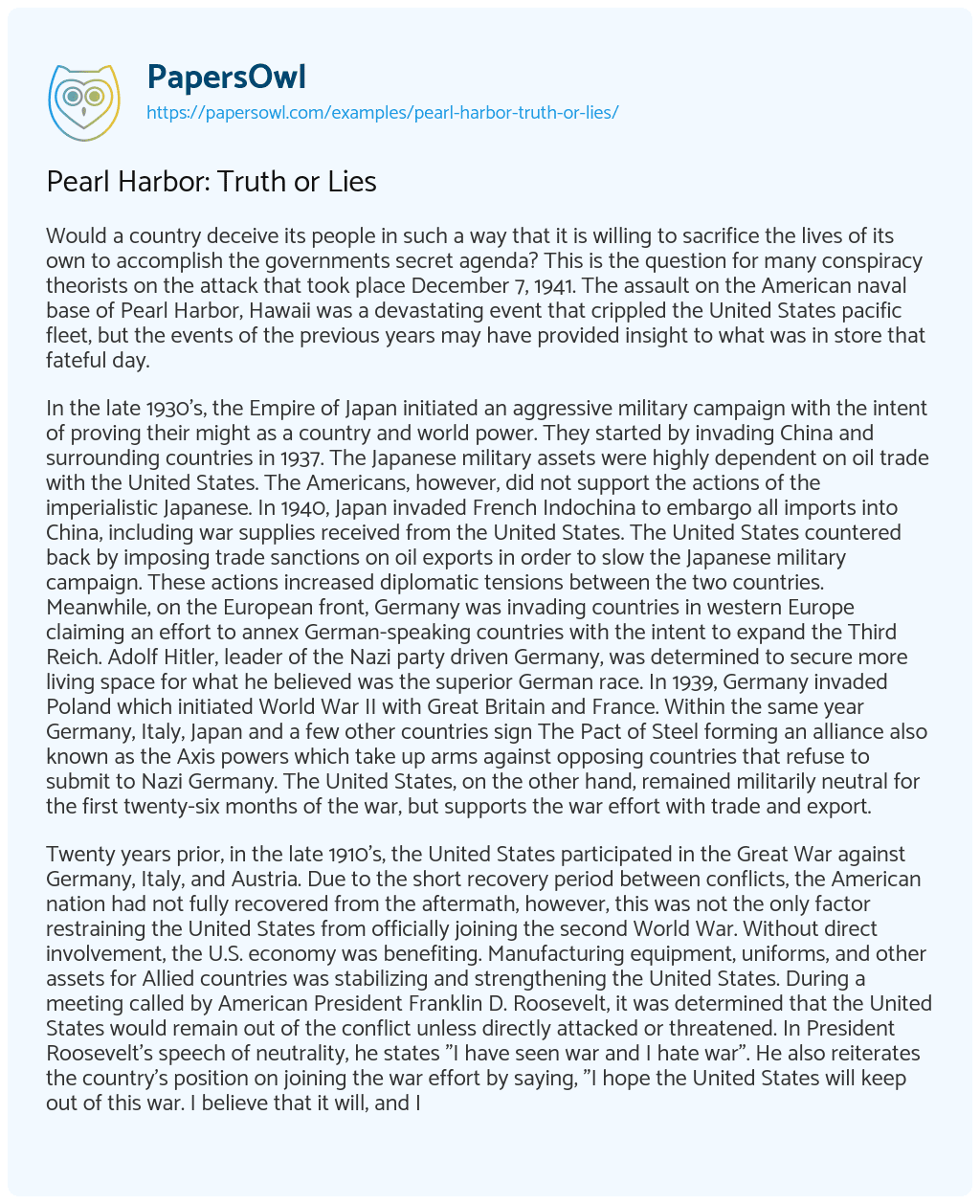 Would a country deceive its people in such a way that it is willing to sacrifice the lives of its own to accomplish the governments secret agenda? This is the question for many conspiracy theorists on the attack that took place December 7, 1941. The assault on the American naval base of Pearl Harbor, Hawaii was a devastating event that crippled the United States pacific fleet, but the events of the previous years may have provided insight to what was in store that fateful day.

In the late 1930’s, the Empire of Japan initiated an aggressive military campaign with the intent of proving their might as a country and world power. They started by invading China and surrounding countries in 1937. The Japanese military assets were highly dependent on oil trade with the United States. The Americans, however, did not support the actions of the imperialistic Japanese. In 1940, Japan invaded French Indochina to embargo all imports into China, including war supplies received from the United States. The United States countered back by imposing trade sanctions on oil exports in order to slow the Japanese military campaign. These actions increased diplomatic tensions between the two countries. Meanwhile, on the European front, Germany was invading countries in western Europe claiming an effort to annex German-speaking countries with the intent to expand the Third Reich. Adolf Hitler, leader of the Nazi party driven Germany, was determined to secure more living space for what he believed was the superior German race. In 1939, Germany invaded Poland which initiated World War II with Great Britain and France. Within the same year Germany, Italy, Japan and a few other countries sign The Pact of Steel forming an alliance also known as the Axis powers which take up arms against opposing countries that refuse to submit to Nazi Germany. The United States, on the other hand, remained militarily neutral for the first twenty-six months of the war, but supports the war effort with trade and export.

Twenty years prior, in the late 1910’s, the United States participated in the Great War against Germany, Italy, and Austria. Due to the short recovery period between conflicts, the American nation had not fully recovered from the aftermath, however, this was not the only factor restraining the United States from officially joining the second World War. Without direct involvement, the U.S. economy was benefiting. Manufacturing equipment, uniforms, and other assets for Allied countries was stabilizing and strengthening the United States. During a meeting called by American President Franklin D. Roosevelt, it was determined that the United States would remain out of the conflict unless directly attacked or threatened. In President Roosevelt’s speech of neutrality, he states “I have seen war and I hate war”. He also reiterates the country’s position on joining the war effort by saying, “I hope the United States will keep out of this war. I believe that it will, and I give you assurance and reassurance that every effort of your government will be directed towards that end.” The American population was clearly against the U.S. involvement in the war, however, the upcoming devastating events would cause their entire outlook to change.

On December 7, 1941, the Japanese Imperial Navy conducted a surprise air raid on the American Naval Base of Pearl Harbor. Approximately five American battleships were sunk or damaged beyond repair, two hundred aircrafts were destroyed, and two thousand four hundred service members died in the attack. The only prior notification of the attack was the identification of incoming aircraft movement towards the Hawiian islands which was picked up by a radar unit at Kahuku Point. A report was sent up on the aircraft movement but was disregarded by an expected arrival of U.S. B-17 Bombers that same morning. The attack was later determined as an attempt to destroy or disable the American naval fleet in the pacific for at least six months, so the Japanese could proceed conquering surrounding islands to establish a defensive position. The day after the attack, a Joint Session of the United States Congress was held. This assembly led to the life-altering “Infamy Speech” presented by President Roosevelt. In this speech, President Roosevelt addressed the American people in such a way to motivate and establish a call to arms for all men, women and children. On December 8, 1941, the United States declared war against the Empire of Japan. The remaining Axis alliance of Germany and Italy responded with a declaration of war on the United States a few days later, on December 11, 1941. Twenty-three years following the end of World War I, the United States was at war, but this time in two separate locations of the globe. The question raised by many historians and conspiracy theorists was did the attack on Pearl Harbor happen coincidentally or was it a secret plan of the American government to join the war in Europe?

Following the attacks on Pearl Harbor, historians and conspiracy theorists exploded with possible scenarios that questioned the true intent of the American government and its actions involving her destroyed pacific fleet.  There have been multiple theories circulating the events that took place on December 7, 1941, but there are two major theories that historians have maintained for over 75 years.  These theories are identified as the “Back Door to War” theory and “The Winds Message” theory.

The first major conspiracy theory surrounding the events of Pearl Harbor is the idea that the American government and Roosevelt administration secretly executed a plan to provoke an attack by the Empire of Japan.  According to Robert Dallek’s article “Pearl Harbor and the “Back Door to War” Theory,” he states that “President Franklin D. Roosevelt, inhibited by the American public’s opposition to direct U.S. involvement in the fighting and determined to save Great Britain from a Nazi victory in Europe, manipulated events in the Pacific in order to provoke a Japanese attack on the U.S. naval base at Pearl Harbor on December 7, 1941, thereby forcing the United States to enter the war on the side of Britain” (Para 1). This theory insinuates that the Roosevelt administration takes specific steps throughout the 1930’s to gain the support of the American people to join the war taking place in Europe.  The events throughout the 1930’s by the United States government appear to be questionable considering the American public was not in favor of war.  The Great War that ended in 1918 was considered a mistake by the American public.  The American congress enacted multiple bills throughout the 1930’s to maintain neutrality, but one by one the Roosevelt Administration requested to rescind or amend those laws to support the war in Europe.  In 1935, President Roosevelt convinced congress to revise the Neutrality Act, in order to loan arms and aircrafts to the British.  In 1940, following the fall of France to Nazi Germany, the first peacetime draft was enacted by congress as a defensive measure to protect the United States.  In the summer of that same year, the Pacific naval fleet was relocated from San Diego, CA to Pearl Harbor, HI as a show of force for countries in the Pacific. These are just a few examples of the steps taken by the United States government which were all labeled as defensive measures to protect the American people, however, they could be interpreted to support this conspiracy theory.

The second conspiracy theory involves cryptographic intelligence that is referred to as “The Winds Message”.  The role of intelligence in a time of war is imperative to provide military leaders information to strategically plan operations and outmaneuver their enemies. This type of planning can determine where assets will be placed on the battlefield, how units intend to logistically support their assets, or determine the moves of opposing forces.  In the 1940’s countries possessed a form of cryptographic machine that was used to send and receive messages between the countries governments and their agencies.  Each of these machines had specific names associated with them or names for the messages intercepted by enemy countries. In an article by Peter Kross called “The Winds Message Controversy: The Intelligence that Predicted Pearl Harbor?”, he states “The Japanese used what they called a “Purple” machine to encode top-secret intelligence sent to their embassies around the world.  The code word for American intercepts of Japanese diplomatic and military messages coming into the United States was “Magic”” (Para 4). The Winds Message theory is based on encrypted messages between the Empire of Japan and their American based embassy that was intercepted by the United States government.  These messages are said to have been coded with a different weather forecast for which country the Empire intended on attacking.  Between November 19, 1941 to December 5, 1941, it is believed that multiple encrypted messages and the final order of execution was intercepted by the United States.  It was identified that an American territory would be attacked, but there is no evidence of President Roosevelt ever receiving these transcripts. Conspiracy theorists believe that the United States Navy covered up the communication from “The Winds Message” and withheld the individuals who knew about the messages from testifying before the congressional committee following the end of the war.  The evidence of the intercepted messages and the execution of attack message went missing from official Navy files following the attacks on Pearl Harbor and those documents have been a mystery ever since.

In conclusion, the theories surrounding the events that took place on December 7, 1941 are still just as mysterious as they were 75 years ago. Some historians and conspiracy theorists believe in events of deception and treachery that destroy the very foundation America is built on.  Others believe that the American state department intelligence was not capable of conducting the level of espionage necessary to find out what the Japanese intentions were, and the unified intelligence picture that could have briefed President Roosevelt that there would be an attack, did not exist. The assault on the American naval base of Pearl Harbor, Hawaii was a devastating event that crippled the United States pacific fleet, but the events of the previous years may have provided insight to what was in store that fateful day.