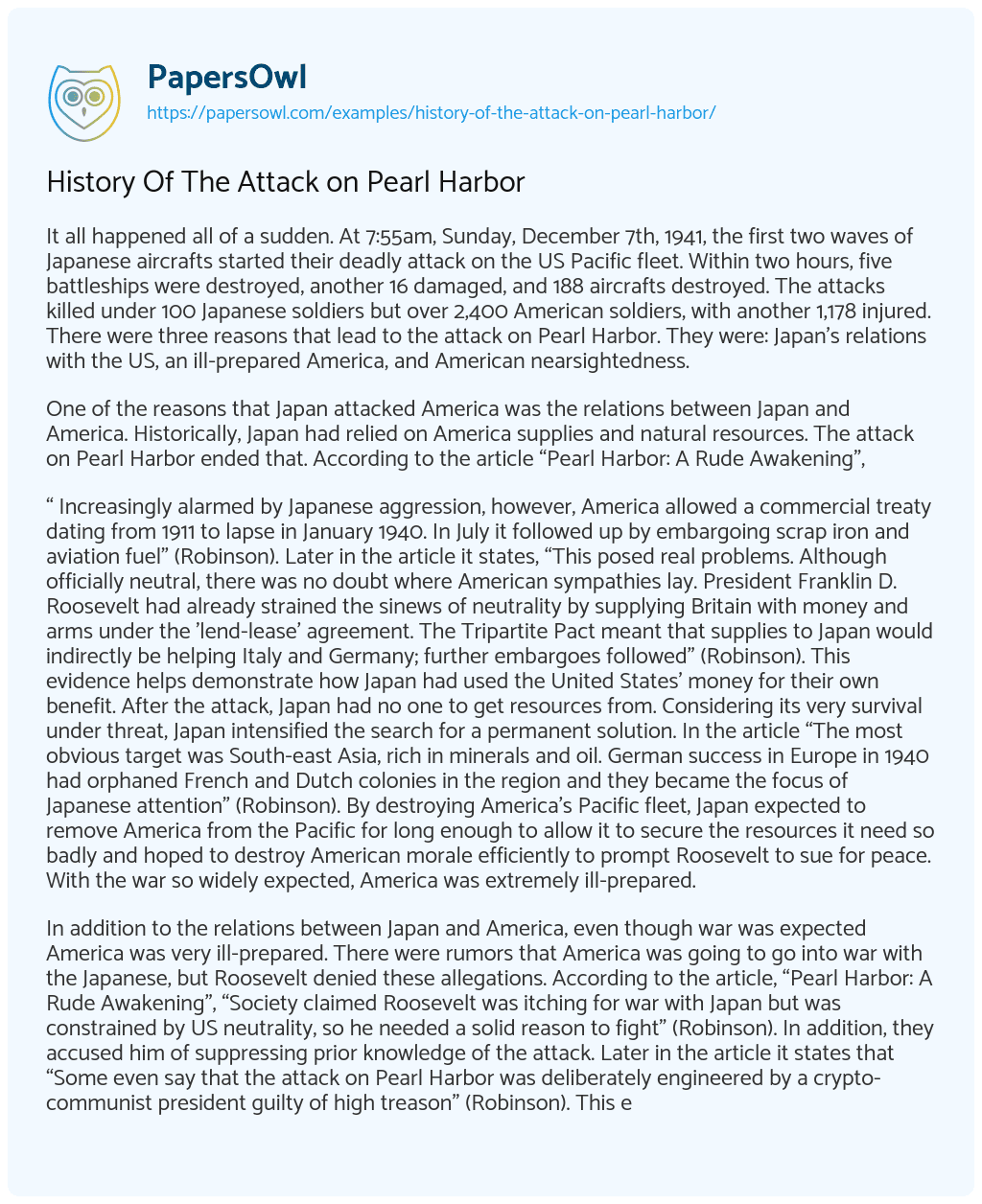 It all happened all of a sudden. At 7:55am, Sunday, December 7th, 1941, the first two waves of Japanese aircrafts started their deadly attack on the US Pacific fleet. Within two hours, five battleships were destroyed, another 16 damaged, and 188 aircrafts destroyed. The attacks killed under 100 Japanese soldiers but over 2,400 American soldiers, with another 1,178 injured. There were three reasons that lead to the attack on Pearl Harbor. They were: Japan’s relations with the US, an ill-prepared America, and American nearsightedness.

One of the reasons that Japan attacked America was the relations between Japan and America. Historically, Japan had relied on America supplies and natural resources. The attack on Pearl Harbor ended that. According to the article “Pearl Harbor: A Rude Awakening”,

“ Increasingly alarmed by Japanese aggression, however, America allowed a commercial treaty dating from 1911 to lapse in January 1940. In July it followed up by embargoing scrap iron and aviation fuel” (Robinson). Later in the article it states, “This posed real problems. Although officially neutral, there was no doubt where American sympathies lay. President Franklin D. Roosevelt had already strained the sinews of neutrality by supplying Britain with money and arms under the ‘lend-lease’ agreement. The Tripartite Pact meant that supplies to Japan would indirectly be helping Italy and Germany; further embargoes followed” (Robinson). This evidence helps demonstrate how Japan had used the United States’ money for their own benefit. After the attack, Japan had no one to get resources from. Considering its very survival under threat, Japan intensified the search for a permanent solution. In the article “The most obvious target was South-east Asia, rich in minerals and oil. German success in Europe in 1940 had orphaned French and Dutch colonies in the region and they became the focus of Japanese attention” (Robinson). By destroying America’s Pacific fleet, Japan expected to remove America from the Pacific for long enough to allow it to secure the resources it need so badly and hoped to destroy American morale efficiently to prompt Roosevelt to sue for peace. With the war so widely expected, America was extremely ill-prepared.

In addition to the relations between Japan and America, even though war was expected America was very ill-prepared. There were rumors that America was going to go into war with the Japanese, but Roosevelt denied these allegations. According to the article, “Pearl Harbor: A Rude Awakening”, “Society claimed Roosevelt was itching for war with Japan but was constrained by US neutrality, so he needed a solid reason to fight” (Robinson). In addition, they accused him of suppressing prior knowledge of the attack. Later in the article it states that “Some even say that the attack on Pearl Harbor was deliberately engineered by a crypto-communist president guilty of high treason” (Robinson). This evidence helps support the fact that America was not prepared for the attack on Pearl Harbor. In 1941 America was not ready for war. Roosevelt knew he needed more time to build a military if he was going to go to war. In the article it states, “If war was to come, he wanted Japan to be seen to be the aggressor, but Roosevelt was in no hurry” (Robinson). However, no matter how hard one looks, there is little evidence of anything more than cover-ups of previous blunders and American nearsightedness.

Furthermore, America was very nearsighted when it came to the attack on Pearl Harbor. Both the administration and the military were both guilty of a staggering lack of coordination between Washington and Oahu, and between different services. In the article, “Pearl Harbor: A Rude Awakening” it states, “Japanese messages were decoded by the army and navy on alternate days and all too often one service failed to properly communicate their new intelligence to the other” (Robinson). Later in the same article it states “ And it wasn’t just codes: on the day of the attack, Japanese aircraft were spotted by American radar”(Robinson). This evidence helps show how nearsighted America was. For example, when there was a Japanese plane they assumed that it was a flight of B-17 bombers due in from the mainland. In the article it states, “It’s not as if America wasn’t warned. In January 1941 Ambassador Grew in Tokyo passed on intelligence that stated that Japan was planning the attack. It was disregarded” (Robinson). This shows how warnings from military personnel in February and July were overlooked. This American nearsightedness stemmed from smug disbelief that Japan would mount such an attack, especially before declaring war. In the article it states, “ Yet any study of Japanese history demonstrated that pre-emptive attacks such as this were almost standard operating procedure” (Robinson). Instead of concentration on what Japan could do, America guessed what they would do.

The attack on Pearl Harbor was one of America’s worst defeats in history. The relations between America and Japan, an ill- prepared America, and America nearsightedness were some of the reasons this devastating attack happened to the United States’ Pacific fleet. President Roosevelt said,  “ December 7th 1941 was a date that will live in infamy ”. He was right.

History Of The Attack on Pearl Harbor. (2020, Jan 06). Retrieved from https://papersowl.com/examples/history-of-the-attack-on-pearl-harbor/