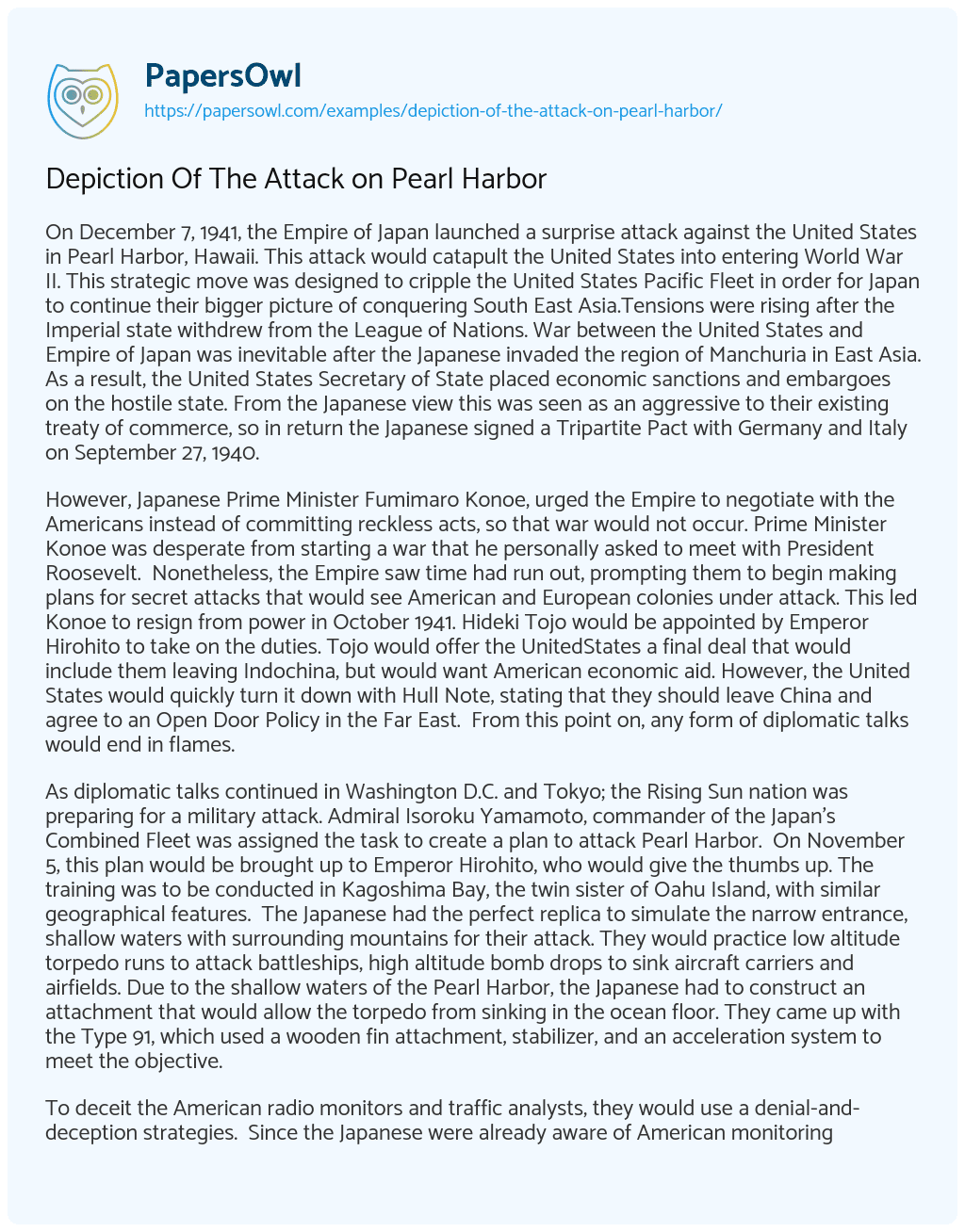 However, Japanese Prime Minister Fumimaro Konoe, urged the Empire to negotiate with the Americans instead of committing reckless acts, so that war would not occur. Prime Minister Konoe was desperate from starting a war that he personally asked to meet with President Roosevelt.  Nonetheless, the Empire saw time had run out, prompting them to begin making plans for secret attacks that would see American and European colonies under attack. This led Konoe to resign from power in October 1941. Hideki Tojo would be appointed by Emperor Hirohito to take on the duties. Tojo would offer the UnitedStates a final deal that would include them leaving Indochina, but would want American economic aid. However, the United States would quickly turn it down with Hull Note, stating that they should leave China and agree to an Open Door Policy in the Far East.  From this point on, any form of diplomatic talks would end in flames.

As diplomatic talks continued in Washington D.C. and Tokyo; the Rising Sun nation was preparing for a military attack. Admiral Isoroku Yamamoto, commander of the Japan’s Combined Fleet was assigned the task to create a plan to attack Pearl Harbor.  On November 5, this plan would be brought up to Emperor Hirohito, who would give the thumbs up. The training was to be conducted in Kagoshima Bay, the twin sister of Oahu Island, with similar geographical features.  The Japanese had the perfect replica to simulate the narrow entrance, shallow waters with surrounding mountains for their attack. They would practice low altitude torpedo runs to attack battleships, high altitude bomb drops to sink aircraft carriers and airfields. Due to the shallow waters of the Pearl Harbor, the Japanese had to construct an attachment that would allow the torpedo from sinking in the ocean floor. They came up with the Type 91, which used a wooden fin attachment, stabilizer, and an acceleration system to meet the objective.

To deceit the American radio monitors and traffic analysts, they would use a denial-and-deception strategies.  Since the Japanese were already aware of American monitoring their moves, they had to cover up their intentions. To succeed, they would communicate the basic scheduled training session as to not raise any alerts of strange movement. While the military was training its soldiers, information was being gathered in Hawaii by the Japanese consul.  It would compromise of ship identification, sailing schedules, aircraft lying routes, and many more factor that would aid their rampage. After almost a year of simulations, the morning of November 26, 1941, the Japanese Fleet left port for Pearl Harbor.On December 7, 1941, the Japanese were getting ready to execute their yearlong plan. Before they could carry on their plan, they sent out submarine and aerial reconnaissance. They would gather last minute information on ships position and weather reports. The submarine fleet were intended to gather information, but also attacking from below.

At approximately 6 A.M., the first wave was led by Commander Mitsuo Fuchida, which consisted of 189 torpedo bombers, fighters, and horizontal aircraft.  The bombers were in charge of attacking every high target ship. Meanwhile the fighter planes were taking down any U.S. aircraft and disabling grounded planes. The second wave consisted of 171 planes, with the plan to take down more specific locations.  The most prominent destination for this wave were aircraft bases on Ford Island. The third waves’ main purpose was to attack fuel storage tanks and dry docks. However, the third phase was aborted after Admiral Nagumo withdrew the fleet, due to the success of the prior assaults.  His decision was backed up by Admiral Yamamoto, but was criticized by other naval officers.

Meanwhile, in the depths of the water, Japanese submarines had embarked on their own missions before planes had taken off. According to the U.S. Navy, Japan had launched five submarines equipped with midget submarines the night before the attack.  The objectives were to gather information that would be broadcasted back to the carriers and attack the U.S. fleet from below in case they were trying to leave. Hours prior to the attack, USS Condor, was the first ship to make contact with Japanese submarines. They signaled to the USS Ward of their finding, which in return found the midget sub trying to enter the harbor, but was attacked and sunk on sight.  Two more submarines would be sunk during the encounter, while the other two that never made it to their destinations due to technical difficulties be found near the island.Two hours after the first bombs dropped on Pearl Harbor, the nightmare was finally over. Two thousand, three hundred and thirty-five military personnel would be killed; along with sixty-eight civilians.

Almost half of those deaths would be from the people trapped in the USS Arizona after its explosion. There would be one thousand, one hundred and forty-three soldiers injured, along with one hundred and three civilians.  After the attack, the only ship not to be repaired would be the USS Arizona, as it had been sunk to the bottom of the water along with most of its crew.  As for the rest of the battleships, they would be repaired and sent on the frontline during the war. On the other hand, 188 aircrafts were destroyed and 159 damaged.  The Japanese counterparts would lose a total of fifty-five men during the almost two hour attack.”Yesterday, December 7th, 1941- a date which will live in infamy”, the words used by President Franklin D. Roosevelt as he asked Congress to formally declare war on the Empire of Japan.  Without a doubt, Congress accepted his request. Following this, on December 11, Germany and Italy declared war on the United States.  This attack would be used in the future to ignite that passion of patriotism to win the war.

Depiction Of The Attack on Pearl Harbor. (2019, Jul 31). Retrieved from https://papersowl.com/examples/depiction-of-the-attack-on-pearl-harbor/