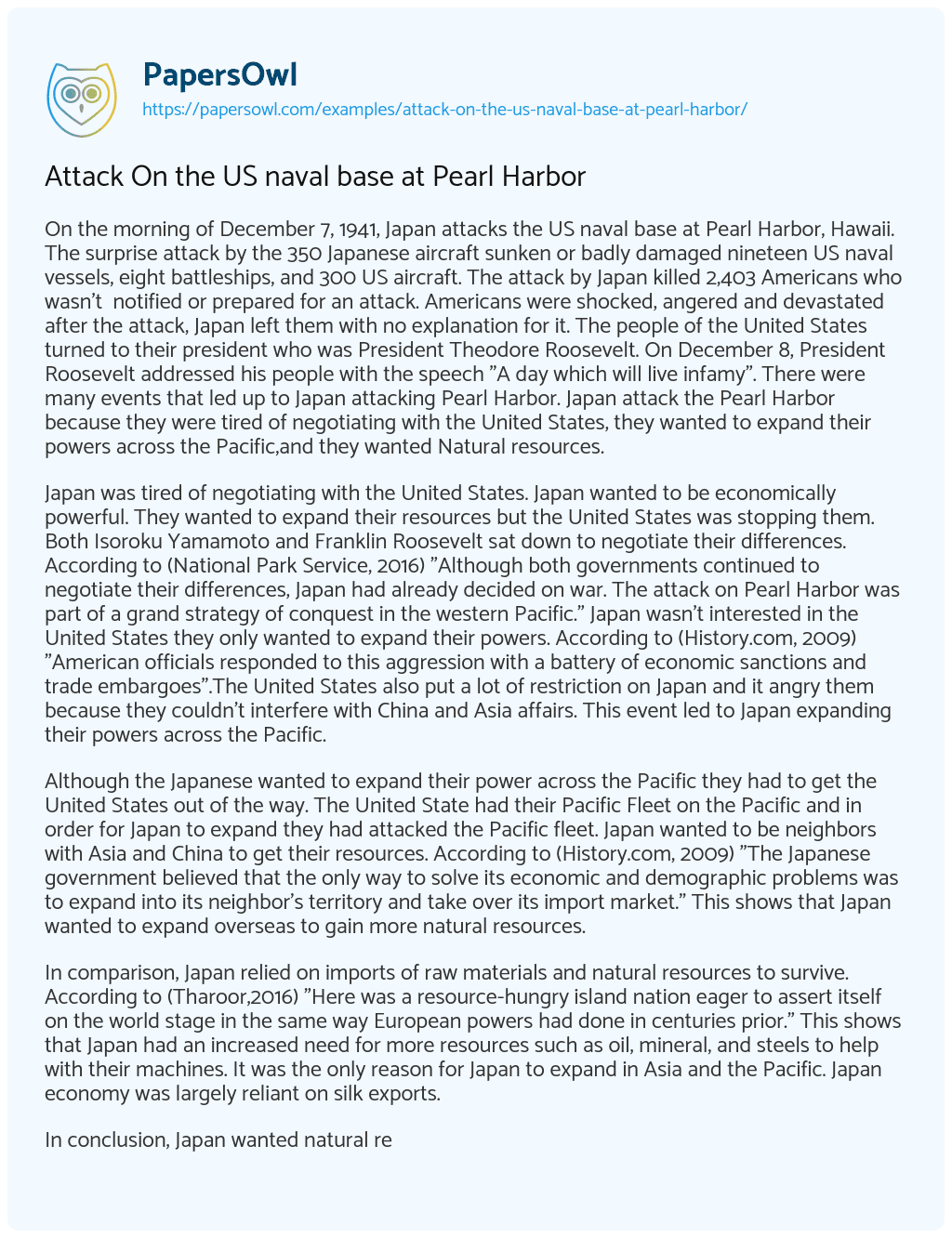 On the morning of December 7, 1941, Japan attacks the US naval base at Pearl Harbor, Hawaii. The surprise attack by the 350 Japanese aircraft sunken or badly damaged nineteen US naval vessels, eight battleships, and 300 US aircraft. The attack by Japan killed 2,403 Americans who wasn’t  notified or prepared for an attack. Americans were shocked, angered and devastated after the attack, Japan left them with no explanation for it. The people of the United States turned to their president who was President Theodore Roosevelt. On December 8, President Roosevelt addressed his people with the speech “A day which will live infamy”. There were many events that led up to Japan attacking Pearl Harbor. Japan attack the Pearl Harbor because they were tired of negotiating with the United States, they wanted to expand their powers across the Pacific,and they wanted Natural resources.

Japan was tired of negotiating with the United States. Japan wanted to be economically powerful. They wanted to expand their resources but the United States was stopping them. Both Isoroku Yamamoto and Franklin Roosevelt sat down to negotiate their differences. According to (National Park Service, 2016) “Although both governments continued to negotiate their differences, Japan had already decided on war. The attack on Pearl Harbor was part of a grand strategy of conquest in the western Pacific.” Japan wasn’t interested in the United States they only wanted to expand their powers. According to (History.com, 2009) “American officials responded to this aggression with a battery of economic sanctions and trade embargoes”.The United States also put a lot of restriction on Japan and it angry them because they couldn’t interfere with China and Asia affairs. This event led to Japan expanding their powers across the Pacific.

Although the Japanese wanted to expand their power across the Pacific they had to get the United States out of the way. The United State had their Pacific Fleet on the Pacific and in order for Japan to expand they had attacked the Pacific fleet. Japan wanted to be neighbors with Asia and China to get their resources. According to (History.com, 2009) “The Japanese government believed that the only way to solve its economic and demographic problems was to expand into its neighbor’s territory and take over its import market.” This shows that Japan wanted to expand overseas to gain more natural resources.

In comparison, Japan relied on imports of raw materials and natural resources to survive. According to (Tharoor,2016) “Here was a resource-hungry island nation eager to assert itself on the world stage in the same way European powers had done in centuries prior.” This shows that Japan had an increased need for more resources such as oil, mineral, and steels to help with their machines. It was the only reason for Japan to expand in Asia and the Pacific. Japan economy was largely reliant on silk exports.

Attack On the US naval base at Pearl Harbor. (2020, Feb 11). Retrieved from https://papersowl.com/examples/attack-on-the-us-naval-base-at-pearl-harbor/