Of Mice and Men and Cannery 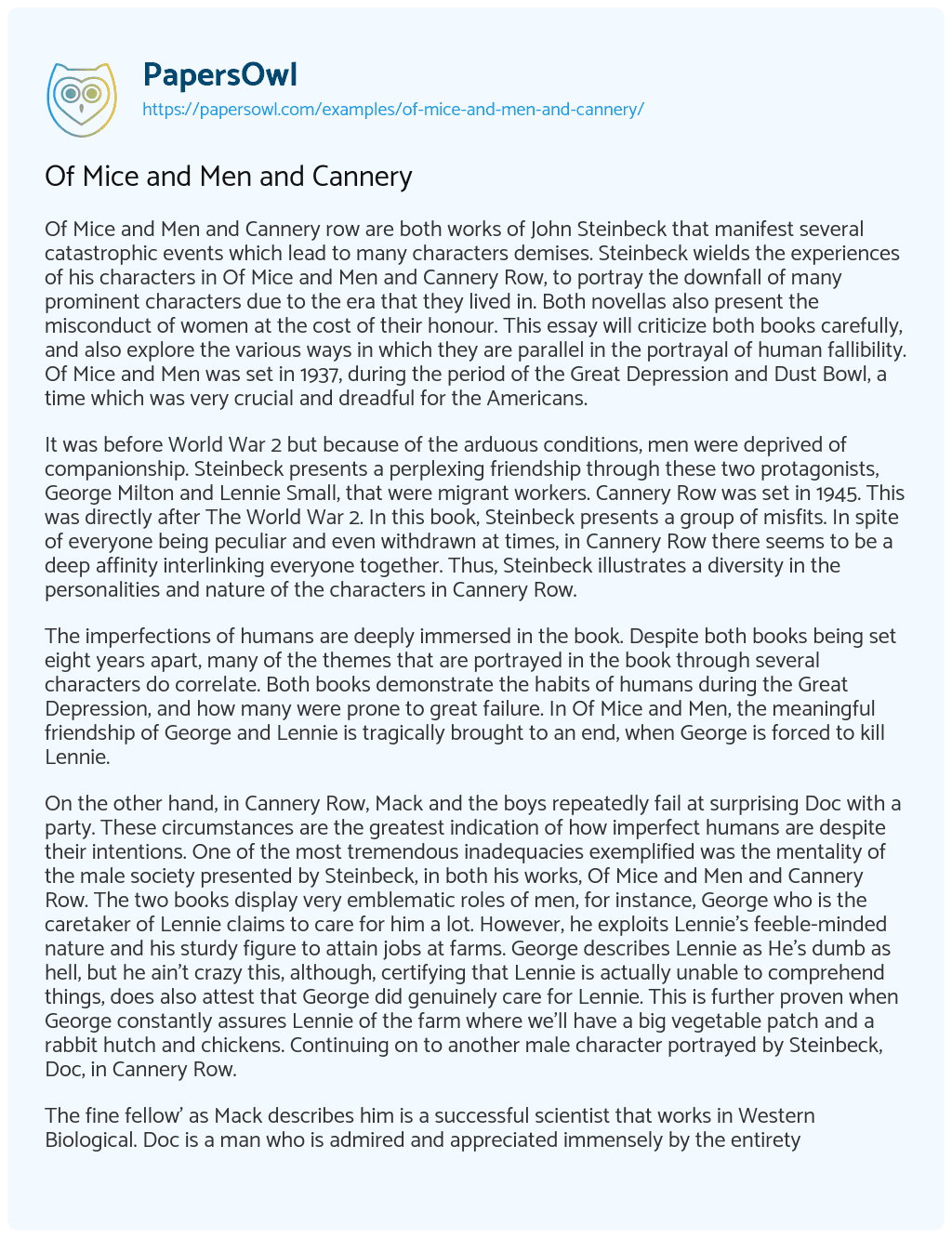 Of Mice and Men and Cannery row are both works of John Steinbeck that manifest several catastrophic events which lead to many characters demises. Steinbeck wields the experiences of his characters in Of Mice and Men and Cannery Row, to portray the downfall of many prominent characters due to the era that they lived in. Both novellas also present the misconduct of women at the cost of their honour. This essay will criticize both books carefully, and also explore the various ways in which they are parallel in the portrayal of human fallibility. Of Mice and Men was set in 1937, during the period of the Great Depression and Dust Bowl, a time which was very crucial and dreadful for the Americans.

It was before World War 2 but because of the arduous conditions, men were deprived of companionship. Steinbeck presents a perplexing friendship through these two protagonists, George Milton and Lennie Small, that were migrant workers. Cannery Row was set in 1945. This was directly after The World War 2. In this book, Steinbeck presents a group of misfits. In spite of everyone being peculiar and even withdrawn at times, in Cannery Row there seems to be a deep affinity interlinking everyone together. Thus, Steinbeck illustrates a diversity in the personalities and nature of the characters in Cannery Row.

The imperfections of humans are deeply immersed in the book. Despite both books being set eight years apart, many of the themes that are portrayed in the book through several characters do correlate. Both books demonstrate the habits of humans during the Great Depression, and how many were prone to great failure. In Of Mice and Men, the meaningful friendship of George and Lennie is tragically brought to an end, when George is forced to kill Lennie.

On the other hand, in Cannery Row, Mack and the boys repeatedly fail at surprising Doc with a party. These circumstances are the greatest indication of how imperfect humans are despite their intentions. One of the most tremendous inadequacies exemplified was the mentality of the male society presented by Steinbeck, in both his works, Of Mice and Men and Cannery Row. The two books display very emblematic roles of men, for instance, George who is the caretaker of Lennie claims to care for him a lot. However, he exploits Lennie’s feeble-minded nature and his sturdy figure to attain jobs at farms. George describes Lennie as He’s dumb as hell, but he ain’t crazy this, although, certifying that Lennie is actually unable to comprehend things, does also attest that George did genuinely care for Lennie. This is further proven when George constantly assures Lennie of the farm where we’ll have a big vegetable patch and a rabbit hutch and chickens. Continuing on to another male character portrayed by Steinbeck, Doc, in Cannery Row.

The fine fellow’ as Mack describes him is a successful scientist that works in Western Biological. Doc is a man who is admired and appreciated immensely by the entirety of people in Cannery Row. He is a very intelligent person who became a fountain of philosophy and science and art this symbolises that he was the core of Cannery Row. Mack, however, is the male protagonist in the book, Cannery Row and he is a notably intriguing character. His personality has several great aspects, for instance, his enthusiasm in regards to rewarding Doc with a party. His sympathetic and supportive traits that are beneficial to Lee Chong, Dora and the girls and Doc make him an even more admirable individual.

In addition, Mack as well as his gang, play an essential role in portraying certain customs. Steinbeck highlights several controversies through Doc’s dialogue, in which he discusses: that Mack and the boys know everything that has ever happened in this world and possibly everything that will happen. I think they survive in this particular world better than other people. In a time when people tear themselves to pieces with ambition and nervousness and covetousness, they are relaxed. All of our so-called successful men are sick men, with bad stomachs, and bad souls, but Mack and the boys are healthy and curiously clean. Steinbeck admires Mack and the boys and it is portrayed through Doc’s unequivocal words. This shows that despite Mack and the boys being unemployed, they are still the ideal men, they are the type of men that prioritise living in the moment.

But on the other hand, there is an abnegation of women that have an influential and pertinent role in both books. This is quite demeaning as women are debilitated to being called a tramp as George described Curley’s wife in Of Mice and Men. Discerning that in Of Mice and Men, only one woman is revealed, which is Curley’s wife. Yet it is further confounding that Curley’s wife is never introduced or acknowledged by her name. She is only ever known and referred to as Curley’s wife or other derogative words. She is portrayed and seen as an instigator as well as an attention seeking woman. But in actuality, she was extremely lonely. She was repeatedly abandoned in the house, which compelled her to incessantly appear on the farm, seeking for an individual to converse with. Steinbeck eventually grants Curley’s wife the liberty to divulge her indubitable emotions and feelings, during her interaction with Lennie, which contravened the assumptions that men like George had formed.

Her declaration revealed that she was a woman with great hopes and dreams for her future and she Coulda been in the movies, an’ had nice clothes but she settled for Curley unknowing to his feigned personality. She then proceeds to express her enmity for Curley: Well, I ain’t told this to nobody before. Maybe I oughten to. I don’ like Curley. He ain’t a nice fella. Nonetheless, in Cannery Row, there is a slight progression in the portrayal of women. The first woman that is introduced in Cannery Row is Dora who, (…) has through the exercise of special gifts of tact and honesty, charity and a certain realism, made herself respected by the intelligent, the learned, and the kind. She manages a restaurant, in other words, an illegal business called Bear Flag Restaurant which is a club where her girls serve men. Once more women have been highlighted as being prostitutes.

This, however, is fictitious because when the influenza epidemic was dispersed throughout Cannery Row, it was Dora and her girls that made soups for everybody and spent time nursing families back to health. Despite the business being run by Dora, she is still respected and it is evident when everyone refers to her as the Madam of the town. Likewise, she also happens to be the only female character that manages a business or is fortunate. Therefore, Dora is a representation of copious things, she is very kind-hearted, eminently philanthropic and most importantly she protects her girls. All the more, she assisted Mack with the preparation for the surprise party for Doc. Another female character who is significant is Mrs Falloy. She is a woman who is displayed as having an incessant lust for wanting to buy curtains and lamps when really there is no window in the boiler.

But she discloses her genuine feelings: Men just don’t understand how a woman feels men just never try to put themselves into a woman’s place Mrs Falloy further supports the dogmatic views that men had of women during the 1900s. We see this on the farm when George had potent opinions about women referring to Curley’s wife as She’s a jail bait all set on the trigger. George was an adherent believer, that women are the solitary cause of all troubles.

That they are only beneficial for being prostitutes and objects whose sole reason is to satisfy men. Relating back to Curley’s wife, George constantly warns Lennie to not associate with her, thinking she is looking for trouble. Despite triggering Lennie to kill her which simultaneously resulted in Lennie’s death as well, she was not aware nor did she intend to be the reason for their demise. She was only looking for companionship. Thus, Steinbeck affirms that men did indeed play very significant and influential roles in both novels. In Of Mice and Men the dynamic friendship of George and Lennie symbolised an eternal bond which did end tragically. Whereas, in Cannery Row, Mack and the boys are a representation of the perfect men despite being unemployed, and always evoking trouble.

Of Mice and Men and Cannery. (2019, Nov 07). Retrieved from https://papersowl.com/examples/of-mice-and-men-and-cannery/