Loneliness and Bitterness both 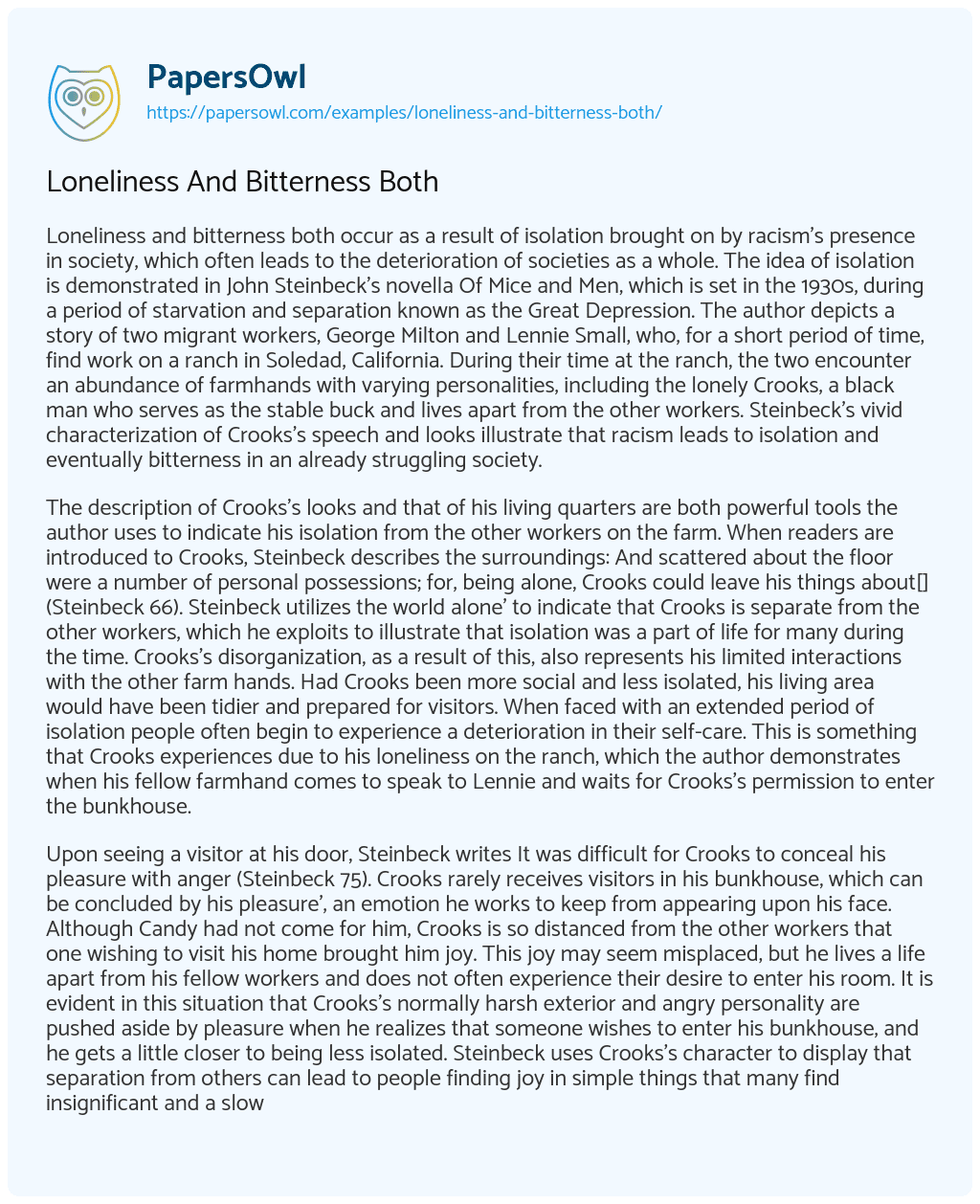 Loneliness and bitterness both occur as a result of isolation brought on by racism’s presence in society, which often leads to the deterioration of societies as a whole. The idea of isolation is demonstrated in John Steinbeck’s novella Of Mice and Men, which is set in the 1930s, during a period of starvation and separation known as the Great Depression. The author depicts a story of two migrant workers, George Milton and Lennie Small, who, for a short period of time, find work on a ranch in Soledad, California. During their time at the ranch, the two encounter an abundance of farmhands with varying personalities, including the lonely Crooks, a black man who serves as the stable buck and lives apart from the other workers. Steinbeck’s vivid characterization of Crooks’s speech and looks illustrate that racism leads to isolation and eventually bitterness in an already struggling society.

The description of Crooks’s looks and that of his living quarters are both powerful tools the author uses to indicate his isolation from the other workers on the farm. When readers are introduced to Crooks, Steinbeck describes the surroundings: And scattered about the floor were a number of personal possessions; for, being alone, Crooks could leave his things about[] (Steinbeck 66). Steinbeck utilizes the world alone’ to indicate that Crooks is separate from the other workers, which he exploits to illustrate that isolation was a part of life for many during the time. Crooks’s disorganization, as a result of this, also represents his limited interactions with the other farm hands. Had Crooks been more social and less isolated, his living area would have been tidier and prepared for visitors. When faced with an extended period of isolation people often begin to experience a deterioration in their self-care. This is something that Crooks experiences due to his loneliness on the ranch, which the author demonstrates when his fellow farmhand comes to speak to Lennie and waits for Crooks’s permission to enter the bunkhouse.

Upon seeing a visitor at his door, Steinbeck writes It was difficult for Crooks to conceal his pleasure with anger (Steinbeck 75). Crooks rarely receives visitors in his bunkhouse, which can be concluded by his pleasure’, an emotion he works to keep from appearing upon his face. Although Candy had not come for him, Crooks is so distanced from the other workers that one wishing to visit his home brought him joy. This joy may seem misplaced, but he lives a life apart from his fellow workers and does not often experience their desire to enter his room. It is evident in this situation that Crooks’s normally harsh exterior and angry personality are pushed aside by pleasure when he realizes that someone wishes to enter his bunkhouse, and he gets a little closer to being less isolated. Steinbeck uses Crooks’s character to display that separation from others can lead to people finding joy in simple things that many find insignificant and a slow decrease in care for personal cleanliness.

Crooks’s words are also used to demonstrate that his solitude, a result of his race, has resulted in bitterness. So, as a result of Crooks’s seclusion, his mood takes a turn for the worse. When Lennie comes to Crooks’s room, smiling, Crooks snaps at him: …You go on get outta my room. I ain’t wanted in the bunkhouse, and you ain’t wanted in my room (Steinbeck 69). Crooks says that he is not welcome in the bunkhouse with the other workers, and is extremely defensive when he tells Lennie to leave his room because he is unwelcome. This is an indicator of his bitterness over his separation from others, which causes him to lash out at a cheerful and optimistic Lennie, who does not fully understand what is going on.

Crooks’s harsh manner portrays that he is deeply unhappy with how he is treated by the others. As Lennie sits in Crooks’s room, Crooks discloses sullenly that he couldn’t go into the bunkhouse and play rummy cause [he] was black (Steinbeck 72). Steinbeck uses these words to indicate that Crooks is discriminated against solely because of his race. When Crooks speaks of the racism and his treatment, he is evidently despondent, and desires for the racism to come to an end but feels that he can do very little because he is unable to change his skin color or identity. Humanity is often reliant on the acceptance of others, and when people are discriminated against because of their differences, they often become bitter. Crooks’s segregation has ultimately led to his bitterness of his situation in life. Steinbeck’s use of Crooks’s speech demonstrates that people often become defensive when they keenly feel the discrimination against them, and become bitter.

Steinbeck utilizes the characterization of Crooks to display that isolation comes about as a result of racism, and that bitterness overcomes a person if they are detached from the rest of humanity for extended periods of time. Crooks’s expression when someone desires to partake in something of his reveals that he feels separated from the other men. His speech portrays his bitterness at his isolation because of his race. He represents all minorities that are discriminated against and their feelings, and is a generalized symbol for how people in the colored community are often treated. This still occurs today and affects everyone in society, whether they realize it or not. With different groups being separated from the rest and targeted, the cultures of the world that are accepted are becoming limited, and as a result, is leading to a spiraling downfall of society.

Loneliness And Bitterness Both. (2019, Jul 11). Retrieved from https://papersowl.com/examples/loneliness-and-bitterness-both/

Throughout the Book Lennie