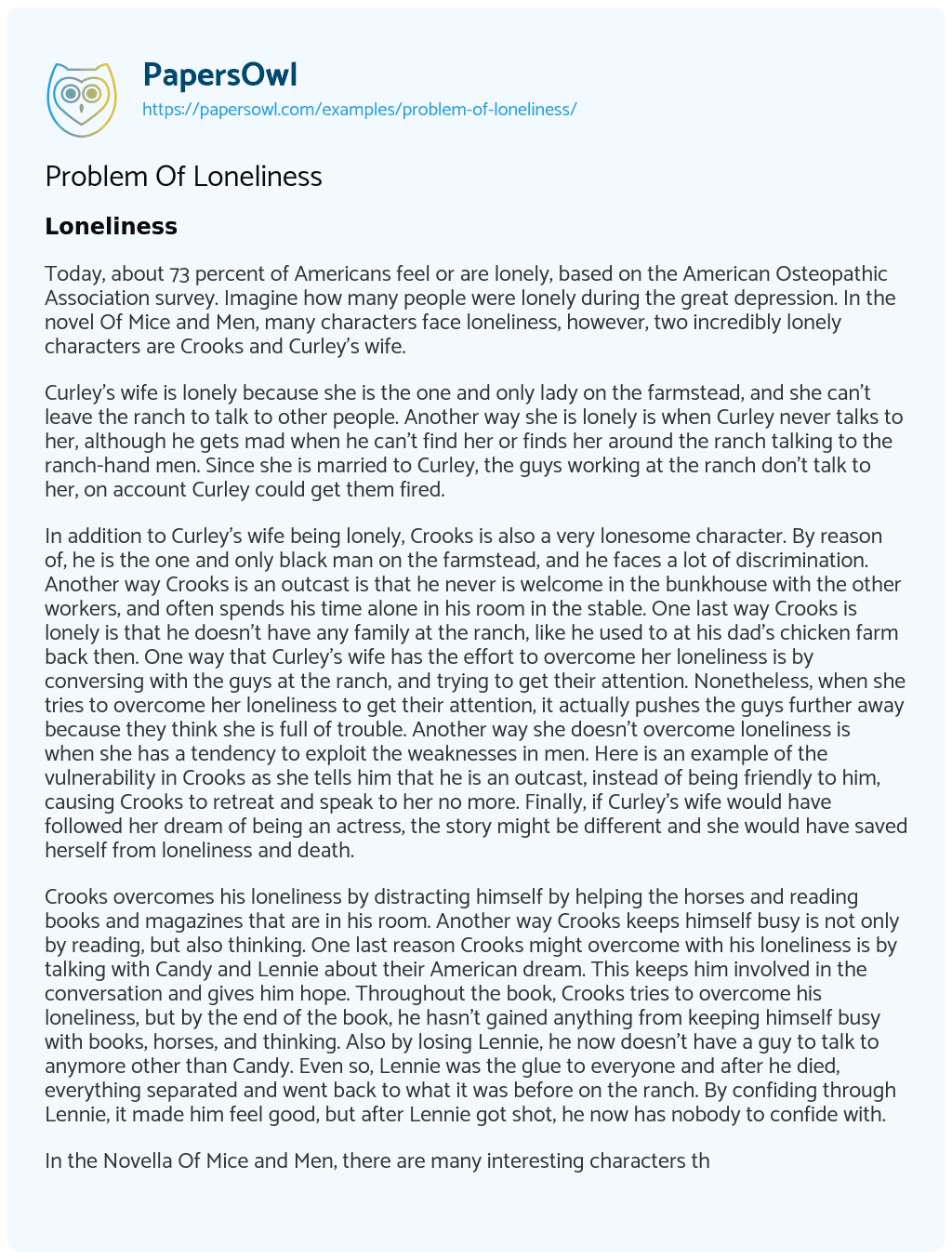 Today, about 73 percent of Americans feel or are lonely, based on the American Osteopathic Association survey. Imagine how many people were lonely during the great depression. In the novel Of Mice and Men, many characters face loneliness, however, two incredibly lonely characters are Crooks and Curley’s wife.

Curley’s wife is lonely because she is the one and only lady on the farmstead, and she can’t leave the ranch to talk to other people. Another way she is lonely is when Curley never talks to her, although he gets mad when he can’t find her or finds her around the ranch talking to the ranch-hand men. Since she is married to Curley, the guys working at the ranch don’t talk to her, on account Curley could get them fired.

In addition to Curley’s wife being lonely, Crooks is also a very lonesome character. By reason of, he is the one and only black man on the farmstead, and he faces a lot of discrimination. Another way Crooks is an outcast is that he never is welcome in the bunkhouse with the other workers, and often spends his time alone in his room in the stable. One last way Crooks is lonely is that he doesn’t have any family at the ranch, like he used to at his dad’s chicken farm back then. One way that Curley’s wife has the effort to overcome her loneliness is by conversing with the guys at the ranch, and trying to get their attention. Nonetheless, when she tries to overcome her loneliness to get their attention, it actually pushes the guys further away because they think she is full of trouble. Another way she doesn’t overcome loneliness is when she has a tendency to exploit the weaknesses in men. Here is an example of the vulnerability in Crooks as she tells him that he is an outcast, instead of being friendly to him, causing Crooks to retreat and speak to her no more. Finally, if Curley’s wife would have followed her dream of being an actress, the story might be different and she would have saved herself from loneliness and death.

Crooks overcomes his loneliness by distracting himself by helping the horses and reading books and magazines that are in his room. Another way Crooks keeps himself busy is not only by reading, but also thinking. One last reason Crooks might overcome with his loneliness is by talking with Candy and Lennie about their American dream. This keeps him involved in the conversation and gives him hope. Throughout the book, Crooks tries to overcome his loneliness, but by the end of the book, he hasn’t gained anything from keeping himself busy with books, horses, and thinking. Also by losing Lennie, he now doesn’t have a guy to talk to anymore other than Candy. Even so, Lennie was the glue to everyone and after he died, everything separated and went back to what it was before on the ranch. By confiding through Lennie, it made him feel good, but after Lennie got shot, he now has nobody to confide with.

In the Novella Of Mice and Men, there are many interesting characters that face loneliness, but the two characters that faced being the most lonely is Curley’s wife and Crooks. Curley’s wife wouldn’t have been so lonely if she followed her dream. Crooks wouldn’t have been so lonely if he stayed with his old man, or found a friend to confide with beyond the ranch. These characters could have chosen a good life, but because of the great depression and the amount of loneliness they had, it caused them to live the way they did in the book.

What is a Feeling of Loneliness