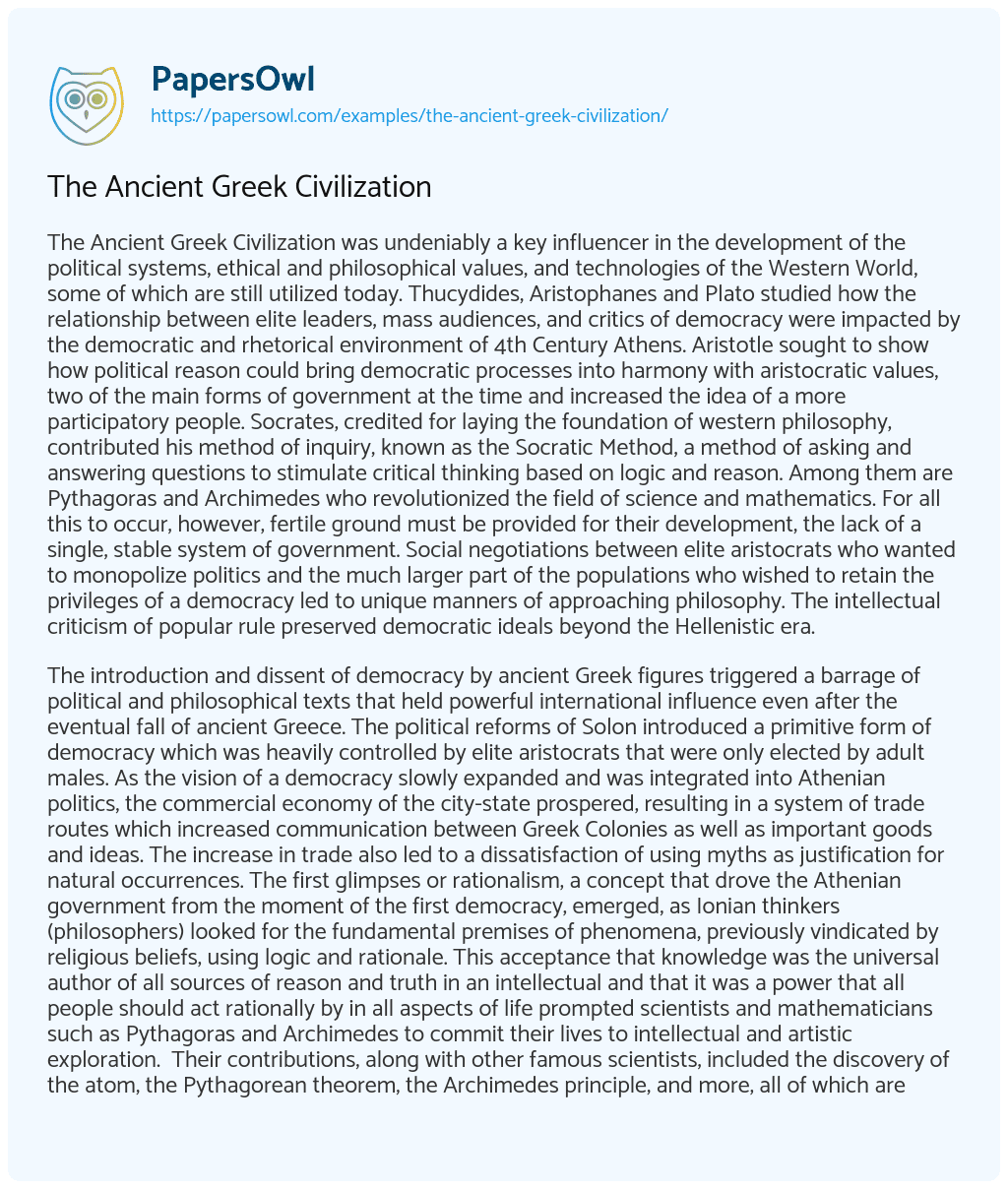 The Ancient Greek Civilization was undeniably a key influencer in the development of the political systems, ethical and philosophical values, and technologies of the Western World, some of which are still utilized today. Thucydides, Aristophanes and Plato studied how the relationship between elite leaders, mass audiences, and critics of democracy were impacted by the democratic and rhetorical environment of 4th Century Athens. Aristotle sought to show how political reason could bring democratic processes into harmony with aristocratic values, two of the main forms of government at the time and increased the idea of a more participatory people. Socrates, credited for laying the foundation of western philosophy, contributed his method of inquiry, known as the Socratic Method, a method of asking and answering questions to stimulate critical thinking based on logic and reason. Among them are Pythagoras and Archimedes who revolutionized the field of science and mathematics. For all this to occur, however, fertile ground must be provided for their development, the lack of a single, stable system of government. Social negotiations between elite aristocrats who wanted to monopolize politics and the much larger part of the populations who wished to retain the privileges of a democracy led to unique manners of approaching philosophy. The intellectual criticism of popular rule preserved democratic ideals beyond the Hellenistic era.

The introduction and dissent of democracy by ancient Greek figures triggered a barrage of political and philosophical texts that held powerful international influence even after the eventual fall of ancient Greece. The political reforms of Solon introduced a primitive form of democracy which was heavily controlled by elite aristocrats that were only elected by adult males. As the vision of a democracy slowly expanded and was integrated into Athenian politics, the commercial economy of the city-state prospered, resulting in a system of trade routes which increased communication between Greek Colonies as well as important goods and ideas. The increase in trade also led to a dissatisfaction of using myths as justification for natural occurrences. The first glimpses or rationalism, a concept that drove the Athenian government from the moment of the first democracy, emerged, as Ionian thinkers (philosophers) looked for the fundamental premises of phenomena, previously vindicated by religious beliefs, using logic and rationale. This acceptance that knowledge was the universal author of all sources of reason and truth in an intellectual and that it was a power that all people should act rationally by in all aspects of life prompted scientists and mathematicians such as Pythagoras and Archimedes to commit their lives to intellectual and artistic exploration.  Their contributions, along with other famous scientists, included the discovery of the atom, the Pythagorean theorem, the Archimedes principle, and more, all of which are still an integral part of science and technology in the modern western world. The political instability in 5th century Athens provided further incentive for Solon to reform the constitution, introducing the very thing that would stimulate constitutional and intellectual progress.

Another important figure that can’t be overlooked when discussing the progress of democracy is Pericles, the prominent and influential general of ‘Golden Age’ Athens. He shuttled the power of elite archons to citizens of all social standings and paved the way for Greece city-states to amalgamate under Athenian hegemony. His Funeral Oration, argued to be one of the greatest glorifications of democracy, states, “In short, I say that as a city we are the school of Hellas…we have forced every sea and land to be the highway of our daring, and everywhere, whether for evil or good, have left imperishable monuments behind us.”   Education became the forefront of rationalism and its ties to democracy and allowed Athenians to grow and think intellectually and contribute to their cities’ progress. Democracy enabled for a liberality that opened up new opportunities for learning and academic versatility by putting trust more with the citizens than the political system itself which influenced the upsurge of the caliber and multitude of Athenian architecture, literature, pottery, and theater. These advancements held such prowess, it was preserved and had traversed across aging Europe and eventually to the western world. As Athens flourished during its golden age between the Persian and Peloponnesian wars, democracy slowly unraveled, corrupted by the imperialism of the Delian league era and descending into frustration and cynicism after Pericles’ death in 429 BC. Decisions weren’t made after rational arguments and democracy became the instrument of a select few individuals, turning into a tyrannical oligarchy. However, the influence of democracy had been powerful on its people, leading to uprising, revolution, and its eventual return.

The Ancient Greek Civilization. (2020, May 12). Retrieved from https://papersowl.com/examples/the-ancient-greek-civilization/