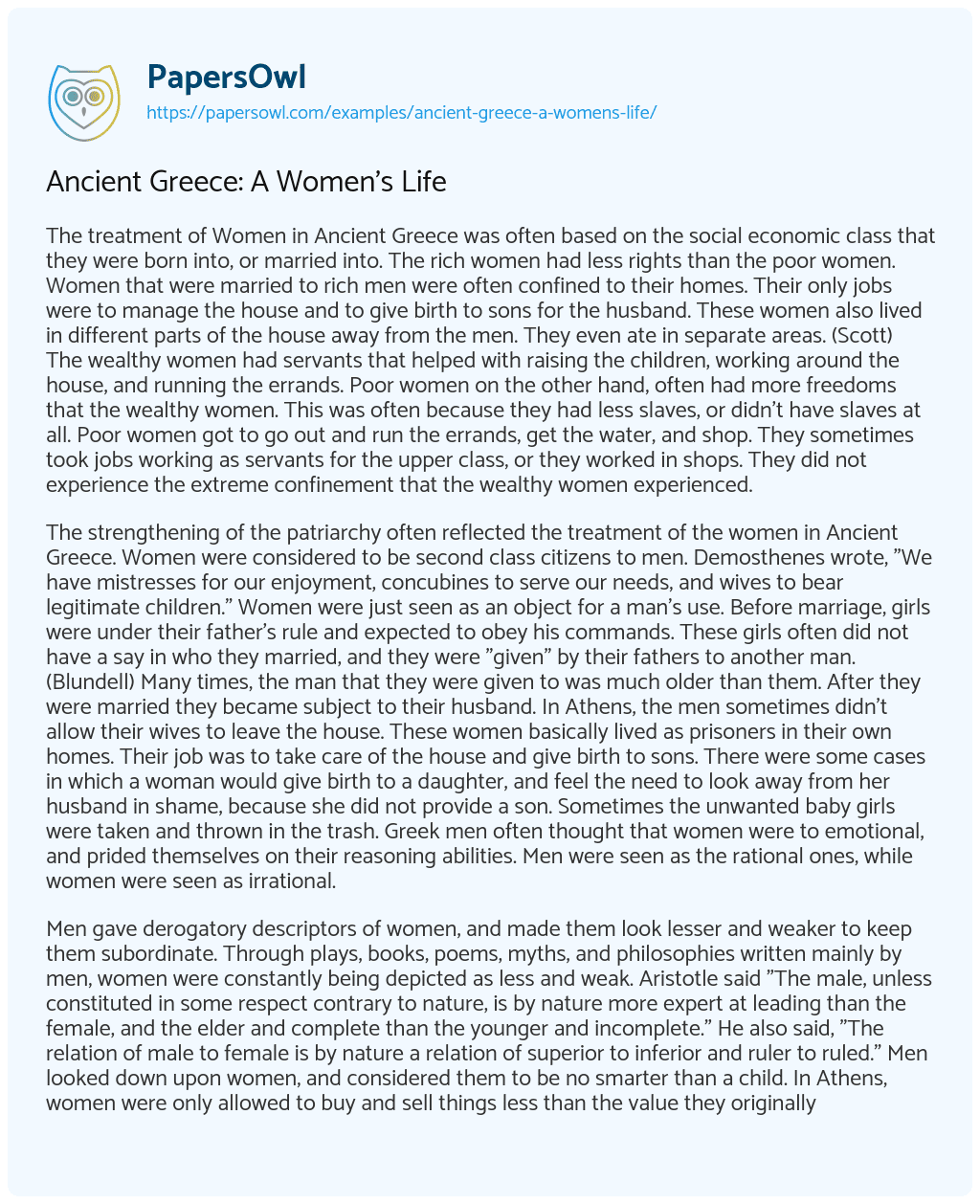 The treatment of Women in Ancient Greece was often based on the social economic class that they were born into, or married into. The rich women had less rights than the poor women. Women that were married to rich men were often confined to their homes. Their only jobs were to manage the house and to give birth to sons for the husband. These women also lived in different parts of the house away from the men. They even ate in separate areas. (Scott) The wealthy women had servants that helped with raising the children, working around the house, and running the errands. Poor women on the other hand, often had more freedoms that the wealthy women. This was often because they had less slaves, or didn’t have slaves at all. Poor women got to go out and run the errands, get the water, and shop. They sometimes took jobs working as servants for the upper class, or they worked in shops. They did not experience the extreme confinement that the wealthy women experienced.

The strengthening of the patriarchy often reflected the treatment of the women in Ancient Greece. Women were considered to be second class citizens to men. Demosthenes wrote, “We have mistresses for our enjoyment, concubines to serve our needs, and wives to bear legitimate children.” Women were just seen as an object for a man’s use. Before marriage, girls were under their father’s rule and expected to obey his commands. These girls often did not have a say in who they married, and they were “given” by their fathers to another man. (Blundell) Many times, the man that they were given to was much older than them. After they were married they became subject to their husband. In Athens, the men sometimes didn’t allow their wives to leave the house. These women basically lived as prisoners in their own homes. Their job was to take care of the house and give birth to sons. There were some cases in which a woman would give birth to a daughter, and feel the need to look away from her husband in shame, because she did not provide a son. Sometimes the unwanted baby girls were taken and thrown in the trash. Greek men often thought that women were to emotional, and prided themselves on their reasoning abilities. Men were seen as the rational ones, while women were seen as irrational.

Men gave derogatory descriptors of women, and made them look lesser and weaker to keep them subordinate. Through plays, books, poems, myths, and philosophies written mainly by men, women were constantly being depicted as less and weak. Aristotle said “The male, unless constituted in some respect contrary to nature, is by nature more expert at leading than the female, and the elder and complete than the younger and incomplete.” He also said, “The relation of male to female is by nature a relation of superior to inferior and ruler to ruled.” Men looked down upon women, and considered them to be no smarter than a child. In Athens, women were only allowed to buy and sell things less than the value they originally had. This gave them the opportunity to participate in a part of the market, but not in any large business deals.

Ancient Greece: A Women's Life. (2019, May 15). Retrieved from https://papersowl.com/examples/ancient-greece-a-womens-life/

Alexander the Great – King of Macedonia and Ancient Greece