Ancient Greece at the Met 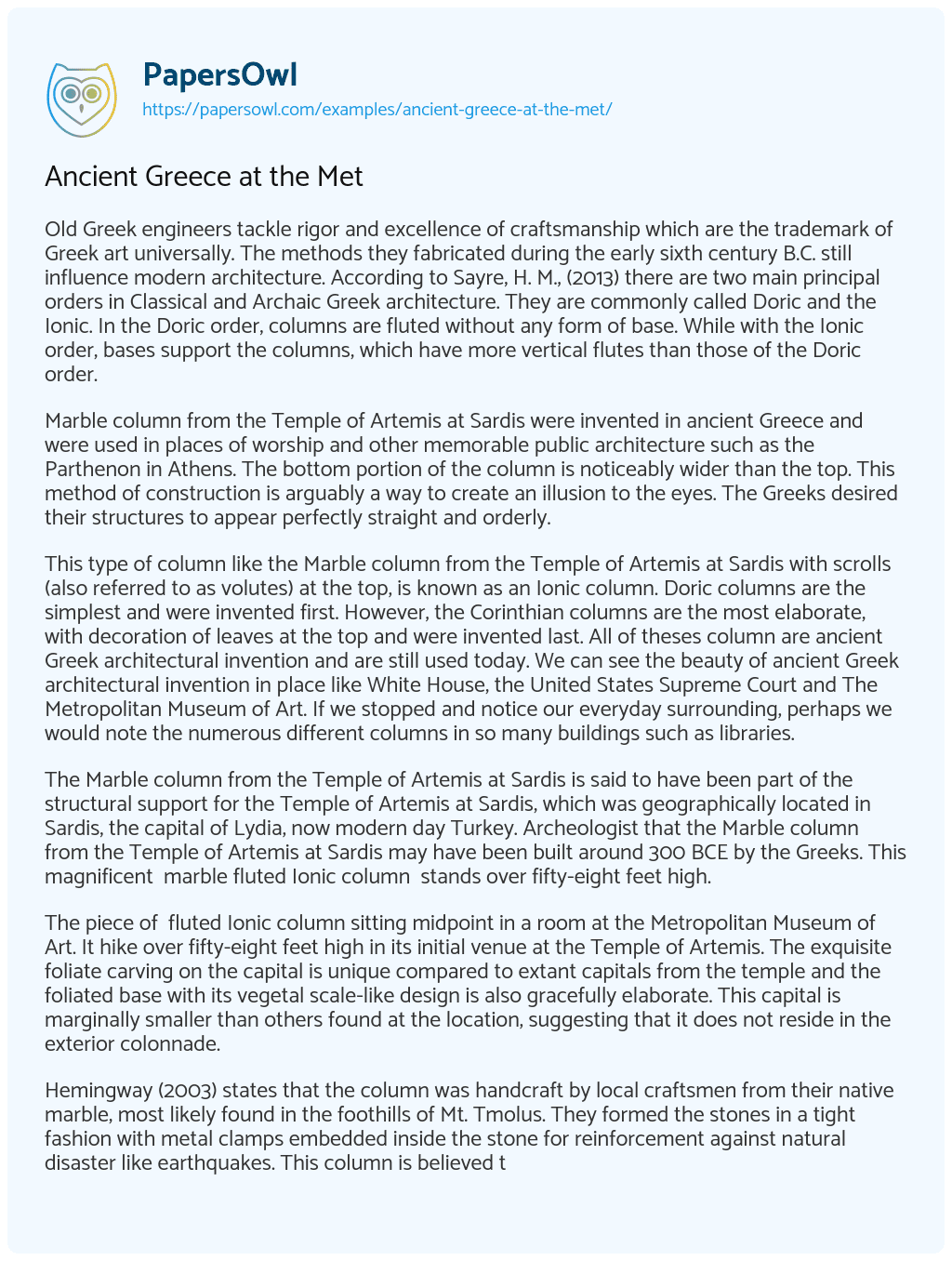 Old Greek engineers tackle rigor and excellence of craftsmanship which are the trademark of Greek art universally. The methods they fabricated during the early sixth century B.C. still influence modern architecture. According to Sayre, H. M., (2013) there are two main principal orders in Classical and Archaic Greek architecture. They are commonly called Doric and the Ionic. In the Doric order, columns are fluted without any form of base. While with the Ionic order, bases support the columns, which have more vertical flutes than those of the Doric order.

Marble column from the Temple of Artemis at Sardis were invented in ancient Greece and were used in places of worship and other memorable public architecture such as the Parthenon in Athens. The bottom portion of the column is noticeably wider than the top. This method of construction is arguably a way to create an illusion to the eyes. The Greeks desired their structures to appear perfectly straight and orderly.

This type of column like the Marble column from the Temple of Artemis at Sardis with scrolls (also referred to as volutes) at the top, is known as an Ionic column. Doric columns are the simplest and were invented first. However, the Corinthian columns are the most elaborate, with decoration of leaves at the top and were invented last. All of theses column are ancient Greek architectural invention and are still used today. We can see the beauty of ancient Greek architectural invention in place like White House, the United States Supreme Court and The Metropolitan Museum of Art. If we stopped and notice our everyday surrounding, perhaps we would note the numerous different columns in so many buildings such as libraries.

The piece of  fluted Ionic column sitting midpoint in a room at the Metropolitan Museum of Art. It hike over fifty-eight feet high in its initial venue at the Temple of Artemis. The exquisite foliate carving on the capital is unique compared to extant capitals from the temple and the foliated base with its vegetal scale-like design is also gracefully elaborate. This capital is marginally smaller than others found at the location, suggesting that it does not reside in the exterior colonnade.

Hemingway (2003) states that the column was handcraft by local craftsmen from their native marble, most likely found in the foothills of Mt. Tmolus. They formed the stones in a tight fashion with metal clamps embedded inside the stone for reinforcement against natural disaster like earthquakes. This column is believed to be part the temple built in honor of and to also worship the Greek goddess Artemis. The goddess Artemis is said to be the goddess of chastity, virginity, the hunt, the moon and the natural environment.

Ancient Greece at the Met. (2019, Dec 02). Retrieved from https://papersowl.com/examples/ancient-greece-at-the-met/

The Architecture of Ancient Greece