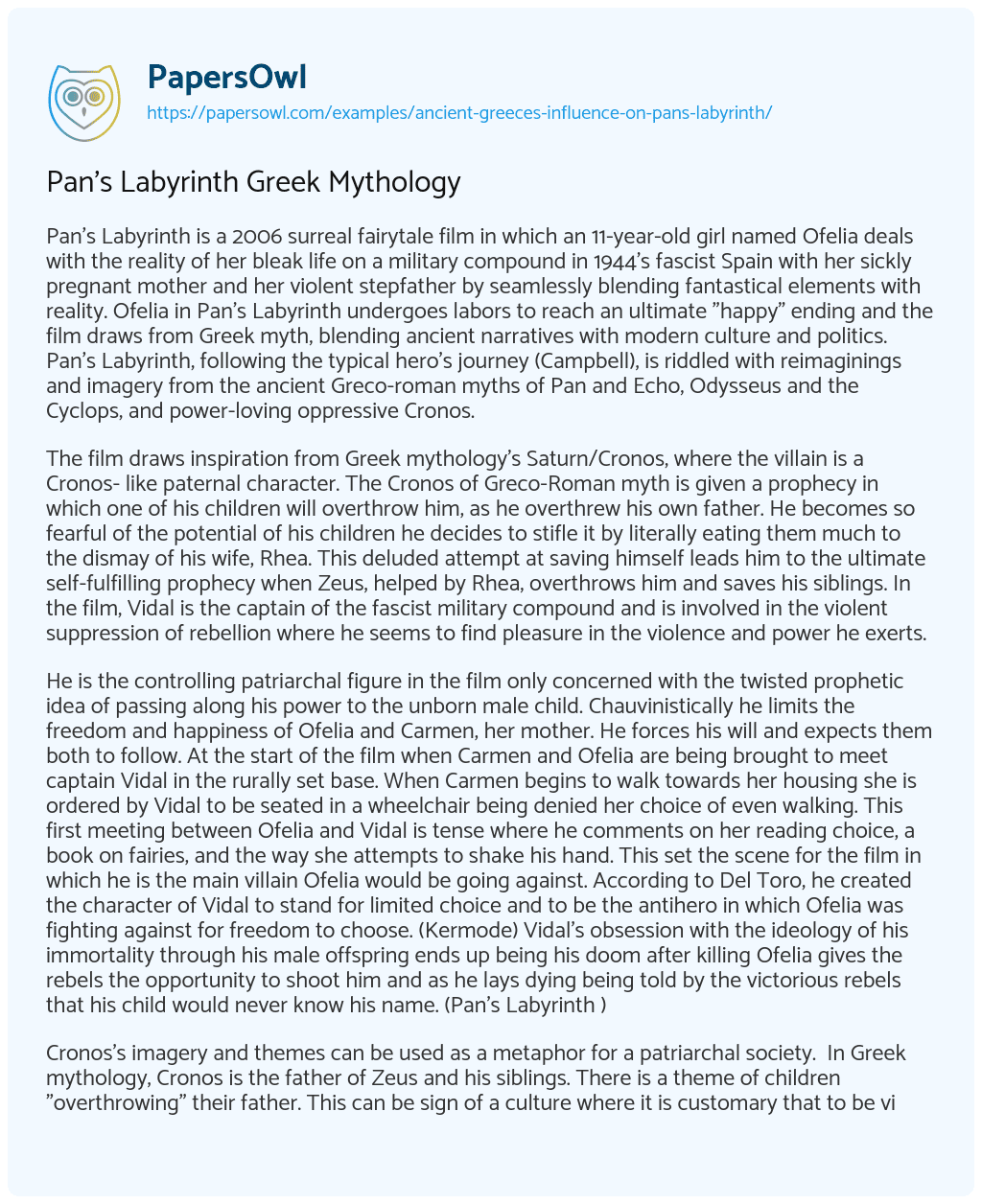 Pan’s Labyrinth is a 2006 surreal fairytale film in which an 11-year-old girl named Ofelia deals with the reality of her bleak life on a military compound in 1944’s fascist Spain with her sickly pregnant mother and her violent stepfather by seamlessly blending fantastical elements with reality. Ofelia in Pan’s Labyrinth undergoes labors to reach an ultimate “happy” ending and the film draws from Greek myth, blending ancient narratives with modern culture and politics. Pan’s Labyrinth, following the typical hero’s journey (Campbell), is riddled with reimaginings and imagery from the ancient Greco-roman myths of Pan and Echo, Odysseus and the Cyclops, and power-loving oppressive Cronos.

The film draws inspiration from Greek mythology’s Saturn/Cronos, where the villain is a Cronos- like paternal character. The Cronos of Greco-Roman myth is given a prophecy in which one of his children will overthrow him, as he overthrew his own father. He becomes so fearful of the potential of his children he decides to stifle it by literally eating them much to the dismay of his wife, Rhea. This deluded attempt at saving himself leads him to the ultimate self-fulfilling prophecy when Zeus, helped by Rhea, overthrows him and saves his siblings. In the film, Vidal is the captain of the fascist military compound and is involved in the violent suppression of rebellion where he seems to find pleasure in the violence and power he exerts.

He is the controlling patriarchal figure in the film only concerned with the twisted prophetic idea of passing along his power to the unborn male child. Chauvinistically he limits the freedom and happiness of Ofelia and Carmen, her mother. He forces his will and expects them both to follow. At the start of the film when Carmen and Ofelia are being brought to meet captain Vidal in the rurally set base. When Carmen begins to walk towards her housing she is ordered by Vidal to be seated in a wheelchair being denied her choice of even walking. This first meeting between Ofelia and Vidal is tense where he comments on her reading choice, a book on fairies, and the way she attempts to shake his hand. This set the scene for the film in which he is the main villain Ofelia would be going against. According to Del Toro, he created the character of Vidal to stand for limited choice and to be the antihero in which Ofelia was fighting against for freedom to choose. (Kermode) Vidal’s obsession with the ideology of his immortality through his male offspring ends up being his doom after killing Ofelia gives the rebels the opportunity to shoot him and as he lays dying being told by the victorious rebels that his child would never know his name. (Pan’s Labyrinth )

Cronos’s imagery and themes can be used as a metaphor for a patriarchal society.  In Greek mythology, Cronos is the father of Zeus and his siblings. There is a theme of children “overthrowing” their father. This can be sign of a culture where it is customary that to be viewed as an adult the citizens would be more independent of their family. In the film, set during Fascist Spain, Vidal is the embodiment of a Cronos who stifles the creativity and freedom of the female characters while violently expressing his power and sadism against the rebels. The myth of Cronos was kept the same in essence but Del Toro created a human version of Cronos that was applicable to the fantasy portion of the film as well as the post-civil war Spain with violent political unrest. Vidal is the villain that Ofelia has to defeat in order to reach her full potential and the villain that was the physical embodiment of the ideology of the fascist movement. The overthrowing of this figure is both a metaphor of freedom for Ofelia but also of the freedom and political success in which sacrifices were made to overthrow the fascist regime of post-civil war Spain.

While the myth of Cronus directly influenced the film thematically, Pan’s Labyrinth has a scene that gives homage to a painting of Cronos by Francisco Goya. The pale man scene occurs during Ofelia’s labors. It is during the second task in which Ofelia nearly fails and summons the Pale Man out of his slumber. According to Everett Burrell, a CGI editor for the movie the scene in which the Pale man has the fairy and takes a bite of her head is directly influenced by Goya’s depiction of Cronos in “Saturn Devouring His Son”. This influence of this scene was an Easter egg of sorts since the actual character of the Pale Man and the struggle Ofelia faces with him is much more reminiscent of Odysseus and the Cyclops.

The pale man scene and the entirety of the second task take on the imagery and plot of Homer’s Odysseus and the cyclops Polyphemus. Ofelia is the heroine of Pan’s Labyrinth and can be compared to Odysseus. In the 2nd trial given to her by the Faun, she is told she needs to find the correct dagger which is necessary for the third and final task. She is given chalk where in her room she draws a door that comes into being and transports her into another dimension. She is given the fairies as companions by the faun and is warned not to eat or touch anything other than the dagger required. Ofelia retrieves the dagger set upon a table filled with appetizing food, while an eyeless, pale and humanoid creature sits at the head of the table unmoving. Although the fairies are shaking their head furiously as Ofelia reaches and consumes the forbidden fruit upon the table, giving in to the temptation and bringing the pale man to life. He grabs his eyes set upon a dish and inserts them into his hands so he can see, then grabbing two of the fairies proceeds to eat them live.

He rushes Ofelia and she narrowly escapes with hers and the last fairy’s life. In book 9 of Homer’s The Odyssey, Odysseus is in the land of the giants and decides to steal provisions from a lone giant who lives in a cave named Polyphemus. His curiosity for actually seeing the cyclops gets the better of him and he decides to wait for him to return to the cave, disregarding the pleas of his crew. This ends badly for Odysseus when they are trapped by the giant and immediately two of his crew are grabbed and eaten in front of them. The myth was revamped to fit into a fairy tale scheme, where the ogre of the story hurts someone the hero is close to due to the hero’s negligence or refusal to adhere to the warning given. Contrary to Odysseus, Ofelia’s adventure ends in her physical death and soul’s ascension to the throne of the underworld to be reunited with her parents.

The film Pan’s Labyrinth takes a spin on the myth of Pan with the Faun. In this version of Pan, the Faun is a part goat and part forest, rather than a human, having tree roots for legs and being covered in moss and shrubbery.  Alluding to the Pan of the ancient tales who is the god of the forest. In the Greco-Roman myth, Pan was the god of nature, half-goat, and half-human. He was lecherous and had many stories where he chased nymphs or bedded goddesses and animals. In the story with Echo, he used sexuality to show dominance toward the other sex. His wrath at being denied is shown by him killing the nymph Echo. (Pan-Facts and Info)Del Toro states that the reason he chose this imagery was “the faun in classical mythology was at the same time a creature of destruction, and a creature of nurturing and life” (Pan and the Fairies-Making of Pan’s Labyrinth). In the film’s version of Pan, the Faun wasn’t a sexualized creature he is the trickster character who dispatches Ofelia on her three tasks in order to reach her “true” family in the underworld. He was an intimidating presence that comes from the fantasy world Ofelia can see and cross into, his intentions are never truly trustworthy. This is displayed by the last labor in which he requests the blood of Ofelia’s infant brother, ending with it being a test to see if she was pure of heart and intention.

This climax leads to her death in the mortal realm and being reincarnated in the underworld. In this modern take on the myth, nature is seen as unnecessary to the rest of the characters due to the political and bloody conflict between Vidal’s troops and the rebels. However, Ofelia more conscious of it being a part of life brings to life a magical connection where fairies, that look like bugs live in the forest and the Faun is an important link between the natural world and the human reality. As a plus Echo is referenced when Ofelia first enters the labyrinth chasing the fairy, still in bug form and she calls ‘echo’ to bounce her voice off the walls. This is when the first glimpse of the faun is shown, he is seemingly a part of the forest wall, and as “Echo” is called he begins to shift to attention. Relating the Faun to Pan and Echo, the nymph he killed due to unrequited lust.

Viewing Pan’s Labyrinth from a modern context tell a story about rebelling against fascist ideas and the ability to choose for oneself. When viewed from an ancient context it would have been a tragic female coming of age story. As many Greco-Roman stories didn’t have too great outcomes for the female characters. Leaving most in unhappy marriages, raped, killed as a byproduct of the male character’s actions, or forever chaste. Being able to compare so many Greek myths to this film shows that the myths are timeless and still inspiring artists. It shows that ancient myths have become tropes to be used in the modern narrative.

From start to finish Pan’s Labyrinth is filled with Mythological “easter eggs” from Greek Mythology. Ofelia acts out a reimagined version of Odysseus vs the Cyclops,  the film has Pan as a trickster character, and the entirety of the film has the oppressive them of Cronos as the controlling freedom inhibiting stepfather and the pale man imagery. Thus showing the persistence of these archetypal scenes or characters throughout cultures and time.