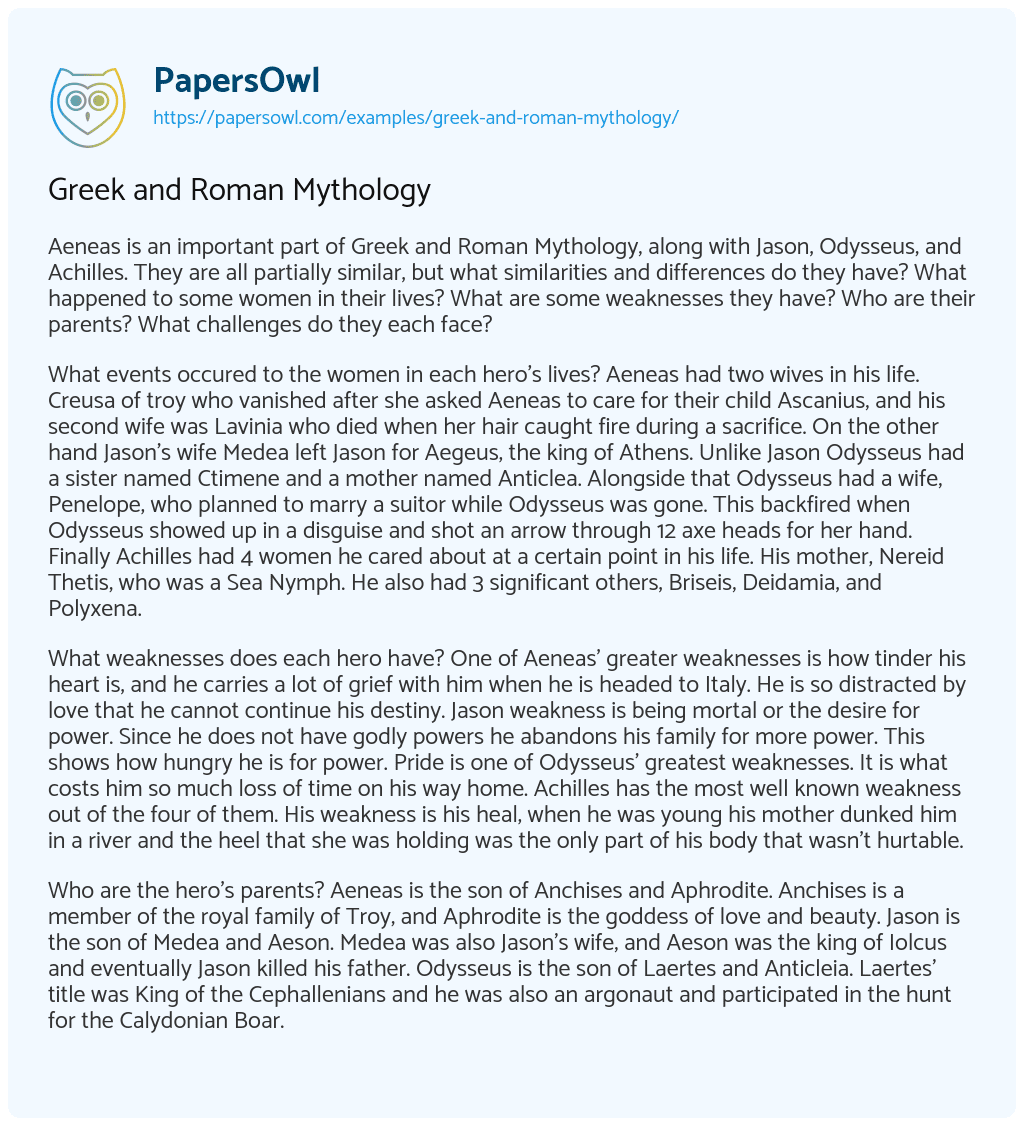 Aeneas is an important part of Greek and Roman Mythology, along with Jason, Odysseus, and Achilles. They are all partially similar, but what similarities and differences do they have? What happened to some women in their lives? What are some weaknesses they have? Who are their parents? What challenges do they each face?

What events occured to the women in each hero’s lives? Aeneas had two wives in his life. Creusa of troy who vanished after she asked Aeneas to care for their child Ascanius, and his second wife was Lavinia who died when her hair caught fire during a sacrifice. On the other hand Jason’s wife Medea left Jason for Aegeus, the king of Athens. Unlike Jason Odysseus had a sister named Ctimene and a mother named Anticlea. Alongside that Odysseus had a wife, Penelope, who planned to marry a suitor while Odysseus was gone. This backfired when Odysseus showed up in a disguise and shot an arrow through 12 axe heads for her hand. Finally Achilles had 4 women he cared about at a certain point in his life. His mother, Nereid Thetis, who was a Sea Nymph. He also had 3 significant others, Briseis, Deidamia, and Polyxena.

What weaknesses does each hero have? One of Aeneas’ greater weaknesses is how tinder his heart is, and he carries a lot of grief with him when he is headed to Italy. He is so distracted by love that he cannot continue his destiny. Jason weakness is being mortal or the desire for power. Since he does not have godly powers he abandons his family for more power. This shows how hungry he is for power. Pride is one of Odysseus’ greatest weaknesses. It is what costs him so much loss of time on his way home. Achilles has the most well known weakness out of the four of them. His weakness is his heal, when he was young his mother dunked him in a river and the heel that she was holding was the only part of his body that wasn’t hurtable.

Who are the hero’s parents? Aeneas is the son of Anchises and Aphrodite. Anchises is a member of the royal family of Troy, and Aphrodite is the goddess of love and beauty. Jason is the son of Medea and Aeson. Medea was also Jason’s wife, and Aeson was the king of Iolcus and eventually Jason killed his father. Odysseus is the son of Laertes and Anticleia. Laertes’ title was King of the Cephallenians and he was also an argonaut and participated in the hunt for the Calydonian Boar.

Aeneas and Many Heroes

Achilles is One of the Greatest Greek Warriors