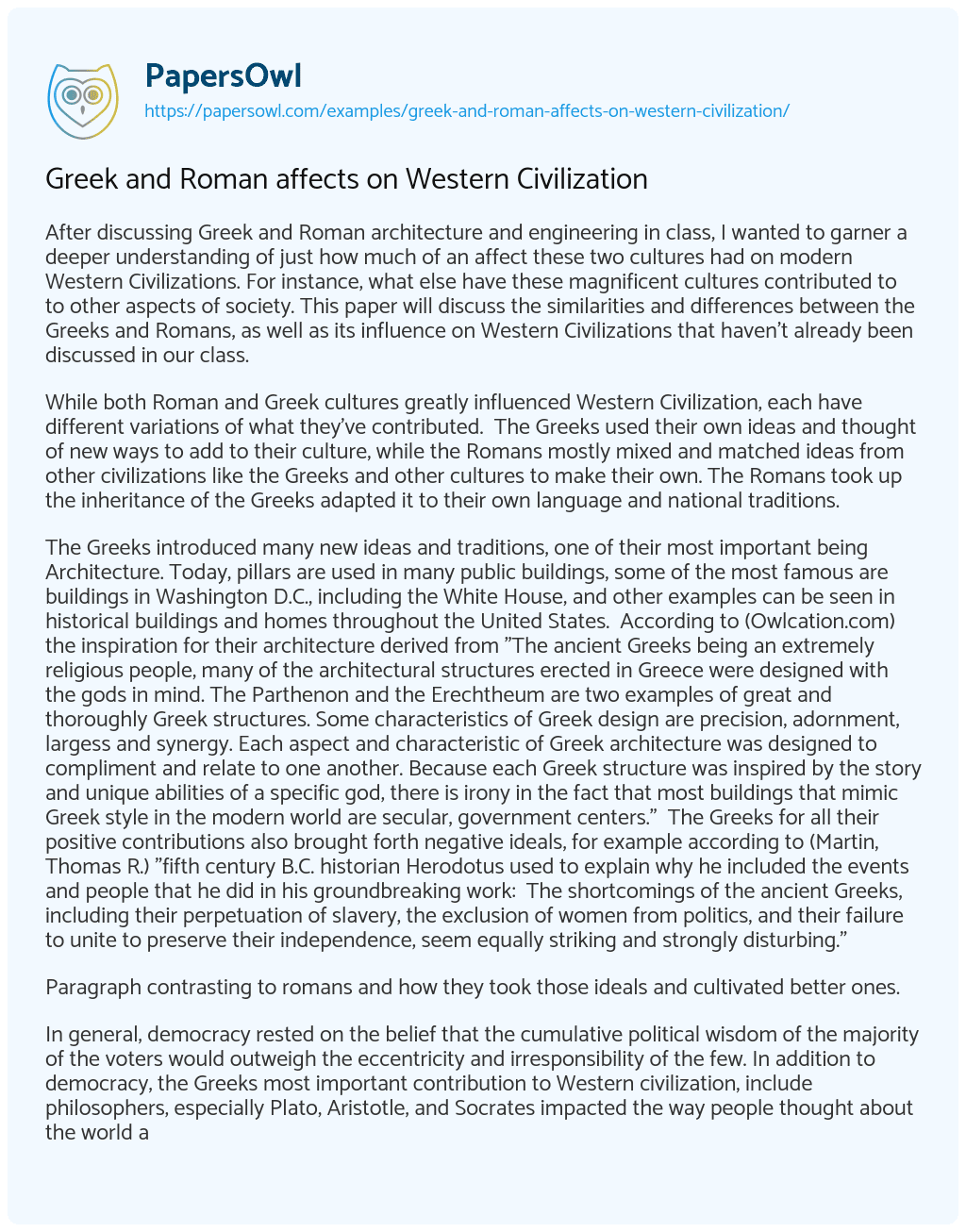 After discussing Greek and Roman architecture and engineering in class, I wanted to garner a deeper understanding of just how much of an affect these two cultures had on modern Western Civilizations. For instance, what else have these magnificent cultures contributed to to other aspects of society. This paper will discuss the similarities and differences between the Greeks and Romans, as well as its influence on Western Civilizations that haven’t already been discussed in our class.

While both Roman and Greek cultures greatly influenced Western Civilization, each have different variations of what they’ve contributed.  The Greeks used their own ideas and thought of new ways to add to their culture, while the Romans mostly mixed and matched ideas from other civilizations like the Greeks and other cultures to make their own. The Romans took up the inheritance of the Greeks adapted it to their own language and national traditions.

The Greeks introduced many new ideas and traditions, one of their most important being Architecture. Today, pillars are used in many public buildings, some of the most famous are buildings in Washington D.C., including the White House, and other examples can be seen in historical buildings and homes throughout the United States.  According to (Owlcation.com) the inspiration for their architecture derived from “The ancient Greeks being an extremely religious people, many of the architectural structures erected in Greece were designed with the gods in mind. The Parthenon and the Erechtheum are two examples of great and thoroughly Greek structures. Some characteristics of Greek design are precision, adornment, largess and synergy. Each aspect and characteristic of Greek architecture was designed to compliment and relate to one another. Because each Greek structure was inspired by the story and unique abilities of a specific god, there is irony in the fact that most buildings that mimic Greek style in the modern world are secular, government centers.”  The Greeks for all their positive contributions also brought forth negative ideals, for example according to (Martin, Thomas R.) “fifth century B.C. historian Herodotus used to explain why he included the events and people that he did in his groundbreaking work:  The shortcomings of the ancient Greeks, including their perpetuation of slavery, the exclusion of women from politics, and their failure to unite to preserve their independence, seem equally striking and strongly disturbing.”

Paragraph contrasting to romans and how they took those ideals and cultivated better ones.

In general, democracy rested on the belief that the cumulative political wisdom of the majority of the voters would outweigh the eccentricity and irresponsibility of the few. In addition to democracy, the Greeks most important contribution to Western civilization, include philosophers, especially Plato, Aristotle, and Socrates impacted the way people thought about the world around them. Greek architecture is still commonly used today, as evidenced by our use of pillars and columns. The ancient Greeks also excelled in sculpting. They figured out how to make graceful, emotional, and realistic statues which needed no additional support.

Poetry, theatre, and drama also made up an important part of Greek culture. Some Greeks studied science, math, history, and their studies form the basis of many of today’s theories. Science helped others understand a little more of these subjects. In Greece, as in today’s world, science was based on observation, not myth, even though myths were considered an important part of life to every Greek. The Greeks are also considered to be the first people who recorded history only after consulting witnesses, forming the base of modern history.

One exceptionally significant custom of the Greeks still observed today is the Olympics. These ancient games incorporated a concept of free athletic competition without bloodshed. If the Greeks

An Introduction to the Analysis and History of Western Civilization

An Examination of the Roman Empire: the Ideal Upon which the Western Civilization was Shaped

An Analysis on the Attributes that have Influenced Western Civilization