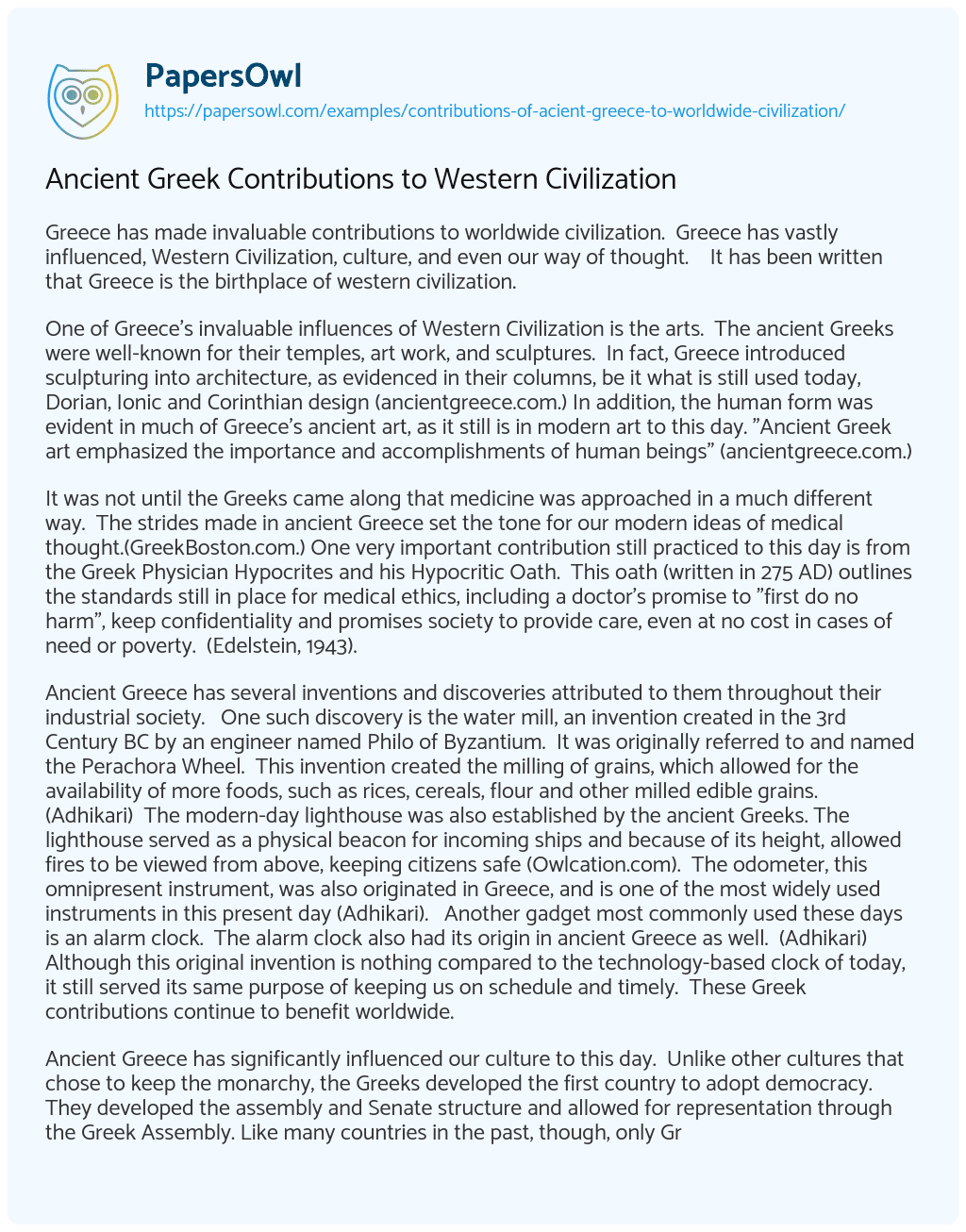 Greece has made invaluable contributions to worldwide civilization.  Greece has vastly influenced, Western Civilization, culture, and even our way of thought.    It has been written that Greece is the birthplace of western civilization.

One of Greece’s invaluable influences of Western Civilization is the arts.  The ancient Greeks were well-known for their temples, art work, and sculptures.  In fact, Greece introduced sculpturing into architecture, as evidenced in their columns, be it what is still used today, Dorian, Ionic and Corinthian design (ancientgreece.com.) In addition, the human form was evident in much of Greece’s ancient art, as it still is in modern art to this day. “Ancient Greek art emphasized the importance and accomplishments of human beings” (ancientgreece.com.)

It was not until the Greeks came along that medicine was approached in a much different way.  The strides made in ancient Greece set the tone for our modern ideas of medical thought.(GreekBoston.com.) One very important contribution still practiced to this day is from the Greek Physician Hypocrites and his Hypocritic Oath.  This oath (written in 275 AD) outlines the standards still in place for medical ethics, including a doctor’s promise to “first do no harm”, keep confidentiality and promises society to provide care, even at no cost in cases of need or poverty.  (Edelstein, 1943).

Ancient Greece has several inventions and discoveries attributed to them throughout their industrial society.   One such discovery is the water mill, an invention created in the 3rd Century BC by an engineer named Philo of Byzantium.  It was originally referred to and named the Perachora Wheel.  This invention created the milling of grains, which allowed for the availability of more foods, such as rices, cereals, flour and other milled edible grains.  (Adhikari)  The modern-day lighthouse was also established by the ancient Greeks. The lighthouse served as a physical beacon for incoming ships and because of its height, allowed fires to be viewed from above, keeping citizens safe (Owlcation.com).  The odometer, this omnipresent instrument, was also originated in Greece, and is one of the most widely used instruments in this present day (Adhikari).   Another gadget most commonly used these days is an alarm clock.  The alarm clock also had its origin in ancient Greece as well.  (Adhikari)  Although this original invention is nothing compared to the technology-based clock of today, it still served its same purpose of keeping us on schedule and timely.  These Greek contributions continue to benefit worldwide.

Ancient Greece has significantly influenced our culture to this day.  Unlike other cultures that chose to keep the monarchy, the Greeks developed the first country to adopt democracy.  They developed the assembly and Senate structure and allowed for representation through the Greek Assembly. Like many countries in the past, though, only Greek men had the right to vote and be elected.  As with our country, the capital city was the center of democracy (owlcation, 2018).

Another cultural issue in which the Greeks excelled and introduced to the world was athletics.  “At the core of Greek athletics was an individual’s physical endeavor to over take an opponent.” (Hemingway).  The ancient Greeks founded the first Olympic Games, which initially were primarily a part of a religious festival in honor of their god Zeus, the father of Greek gods and goddesses.  The Olympics were first held in Olympia, Greece (Penn Museum). True to its democratic core, Greece founded the Olympics to gather other nations together in fair athletic competition.  To this day, the Olympics continue, to promote civility and peace between nations -who otherwise might be in conflict- and to provide an arena to present the world’s greatest athletes in competition.

The Olympics was a religious festival in honor of their god Zeus., The ancient Greeks were known for their collection of myths and as such, worshiped many gods and goddesses, including Zeus, Hades, Apollo, Aphrodite, Ares and Hermes. “They explained everything from religious rituals to the weather, and they gave meaning to the world people saw around them” (History.com).     Each god had a different place of worship and Ancient Greeks worshiped their gods in different sanctuaries within the city, depending on the festival or sacrifice required.

One of the reasons ancient Greeks worshiped their gods was to ensure they have victory in battles. Athena, who was the daughter of Zeus, was most commonly associated with the role of guarding cities and facilitating war victories. These gods,  goddesses and collection of myths set the Greeks apart from other nations and religion.   Despite these past pagan roots, modern day Greece embraces Christianity as a nation and continues to this day.

There are two founding fathers in Greek philosophy.  One of them was Aristotle (c. 384 B.C. to 322 B.C.).  He was an ancient Greek philosopher and a scientist who is considered one of the greatest thinkers, incorporating ethics and psychology in his works. In addition to Aristotle Thales of Miletus is considered a father or philosophy (Ashbrook.) It is difficult to even think of a time in which we did not think using both men’s theories and hypothesis in our academic thinking.   Thales is believed to be the great thinker who devised this method of thought and academic teaching (philosophers.co.uk.)  He is known to be the father of Western philosophy and his theories and teachings are part of our daily thought processes.   Aristotle was very involved in medical and scientific study and devised way to incorporate philosophy so that it also included observations of the natural and scientific world.   Aristotle’s methods included the need to observe then deduce to the correct answer.  Instead of beginning with a logical belief, Aristotle challenged us to begin with an illogical conclusion, then to work backwards to the correct theory, using observation and reasoning based on observed events.   Although this is common in medical research now it was unheard of until Aristotle developed this method  (Ashbrook).

An Introduction to the Analysis and History of Western Civilization