Influence of the Protestant Reformation 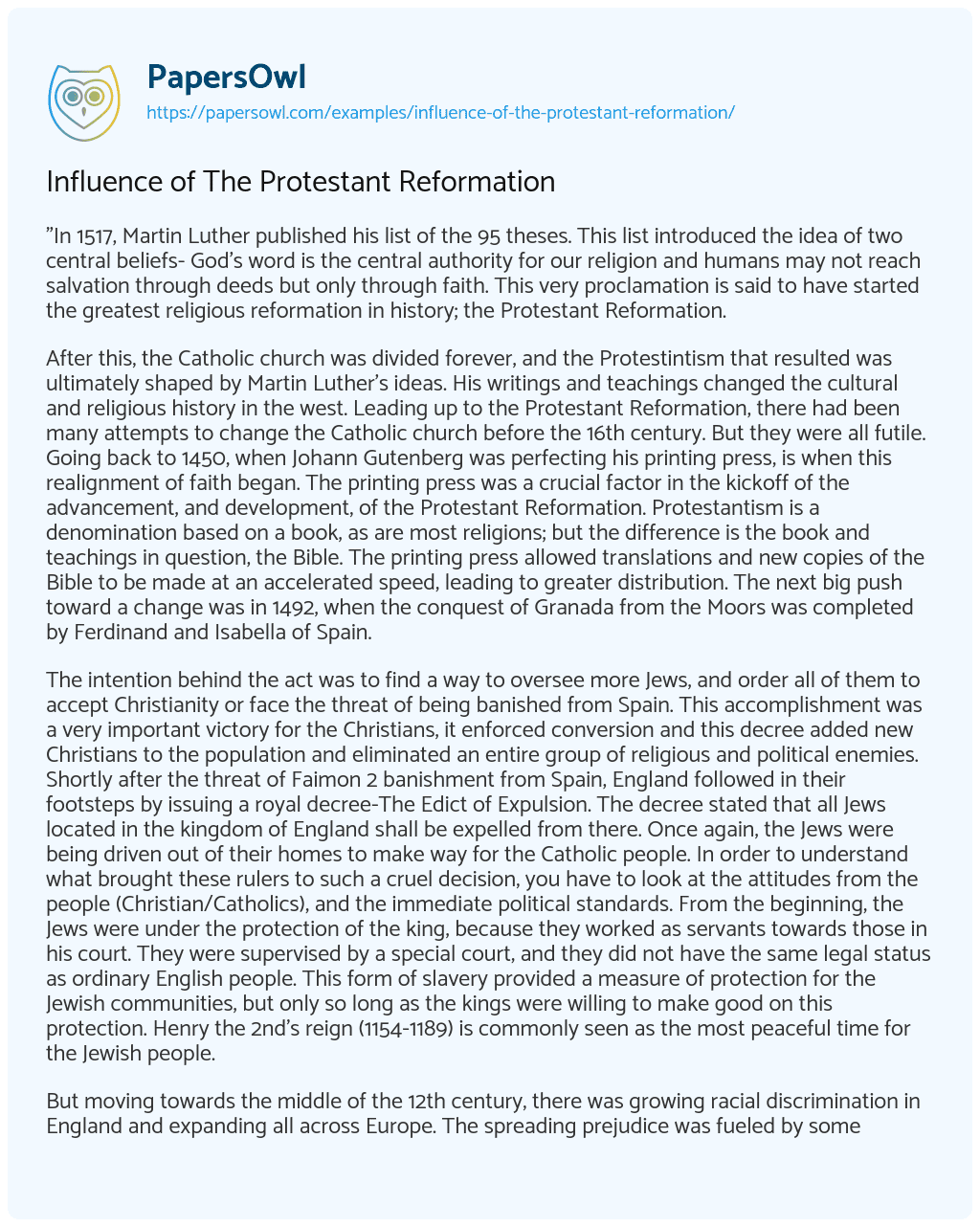 “In 1517, Martin Luther published his list of the 95 theses. This list introduced the idea of two central beliefs- God’s word is the central authority for our religion and humans may not reach salvation through deeds but only through faith. This very proclamation is said to have started the greatest religious reformation in history; the Protestant Reformation.

After this, the Catholic church was divided forever, and the Protestintism that resulted was ultimately shaped by Martin Luther’s ideas. His writings and teachings changed the cultural and religious history in the west. Leading up to the Protestant Reformation, there had been many attempts to change the Catholic church before the 16th century. But they were all futile. Going back to 1450, when Johann Gutenberg was perfecting his printing press, is when this realignment of faith began. The printing press was a crucial factor in the kickoff of the advancement, and development, of the Protestant Reformation. Protestantism is a denomination based on a book, as are most religions; but the difference is the book and teachings in question, the Bible. The printing press allowed translations and new copies of the Bible to be made at an accelerated speed, leading to greater distribution. The next big push toward a change was in 1492, when the conquest of Granada from the Moors was completed by Ferdinand and Isabella of Spain.

The intention behind the act was to find a way to oversee more Jews, and order all of them to accept Christianity or face the threat of being banished from Spain. This accomplishment was a very important victory for the Christians, it enforced conversion and this decree added new Christians to the population and eliminated an entire group of religious and political enemies. Shortly after the threat of Faimon 2 banishment from Spain, England followed in their footsteps by issuing a royal decree-The Edict of Expulsion. The decree stated that all Jews located in the kingdom of England shall be expelled from there. Once again, the Jews were being driven out of their homes to make way for the Catholic people. In order to understand what brought these rulers to such a cruel decision, you have to look at the attitudes from the people (Christian/Catholics), and the immediate political standards. From the beginning, the Jews were under the protection of the king, because they worked as servants towards those in his court. They were supervised by a special court, and they did not have the same legal status as ordinary English people. This form of slavery provided a measure of protection for the Jewish communities, but only so long as the kings were willing to make good on this protection. Henry the 2nd’s reign (1154-1189) is commonly seen as the most peaceful time for the Jewish people.

But moving towards the middle of the 12th century, there was growing racial discrimination in England and expanding all across Europe. The spreading prejudice was fueled by something called the “Blood Libel,” they were false allegations that for magical rituals, Jews kidnapped and murdered Christian children. After these accusations the official stance of the church slowly shifted from tolerance of the Jews to complete resentment and hatred, and because of the substantial authority of the church, the views of the people also drastically changed. In the year 1511, a man named Desiderius Erasmus wrote an essay with a secret theme. This essay, which later became a book, is called In Praise of Folly. It begins with a sarcastic moment in which Folly is praising herself. In the context of this book, Folly is representing Faimon 3 those in authority over the Catholic church. The theme Erasmus is trying to convey is the abuse of the Catholic doctrine, and the corrupt practices of the Roman Catholic Church. Though Erasmus was a Catholic, and remained one until he died, he was very sympathetic to those striving for change. His book paved the way for more writers to come, such as Niccolo Machiavelli, the author of The Prince. Though this book is not directed right at religion, it is about the character of those with a crown. At the time when this book was published, Italy, the Holy Roman Empire, France, and Spain, where the main powers of Europe. Machiavelli was an Italian nobleman and was aiming for a post in the Florentine government. His guide to power was revolutionary in that it described how authoritative people are successful. His hope was that one day, his guide might raise up a vigorous, and effective ruler, that would bring Florence to its former glory. At this point there is so much conflict in the hearts of the Catholic people, that Martin Luther decides to write his list of 95 immoral acts the Catholic church performed. The 95 theses, also known as Disruption On The Power Of Indulgences, was a protest on exactly that.

The Catholic church was buying and selling indulgences to the people giving them a false sense of security, and as a way to repent for sins one had committed. Luther had recently come to believe that the only way to Heaven is through faith, not through one’s own works. After this moment the Protestant Reformation was born. The first and second wars of Kappel, a stepping stone to what were some of the effects of the Reformation, were battles between the Protestant and Roman Catholic cantons of the Old Swiss Confederacy. The First Faimon 4 War of Kappel was during the reformation in Switzerland, the conflict was between the two sides emerged over the conflict of common territories, especially the Thurgau, where the administration changed twice a year between cantons; meaning the authority switched between Catholic and Protestant. The second war was on account of unfinished business from the last war, three years before. Following those wars came the Wars of Religion. The French wars of Religion were a lengthy period of war and discontentment between the Roman Catholics and the Huguenots, spanning from 1562-1598. Once more, war broke out in Germany, with both the peasants and the portion of Roman territory; on account of poor leaders and their legislation, along with religion butting in. Roughly around the 16th century a new form of Protestantism was established- Calvinism.

Though the beliefs vary in different aspects of the denomination, it remains close to Martin Luther’s original idea; that faith alone and the grace of God saves you. There are so many more conflicts that the Reformation brought along, many proclamations from the Roman Catholic church claiming it to be the main religion, and the same with the Protestants. More wars such as the 80 Year War and the 30 Year War brought about even more ideas of the right leaders, and the longing for peace. Even though it has been a few hundred years, the effects the Reformation had on the world are still visible. Many more forms of Protestantism have been founded, leading more and more people to the Bible. Because of Martin Luther and all of the other people who persevere through persecution, we have the world we live in today and freedom in Christ’s truths”

Influence of The Protestant Reformation. (2021, Jun 07). Retrieved from https://papersowl.com/examples/influence-of-the-protestant-reformation/