The Influence of the Byzantine Empire on the Renaissance 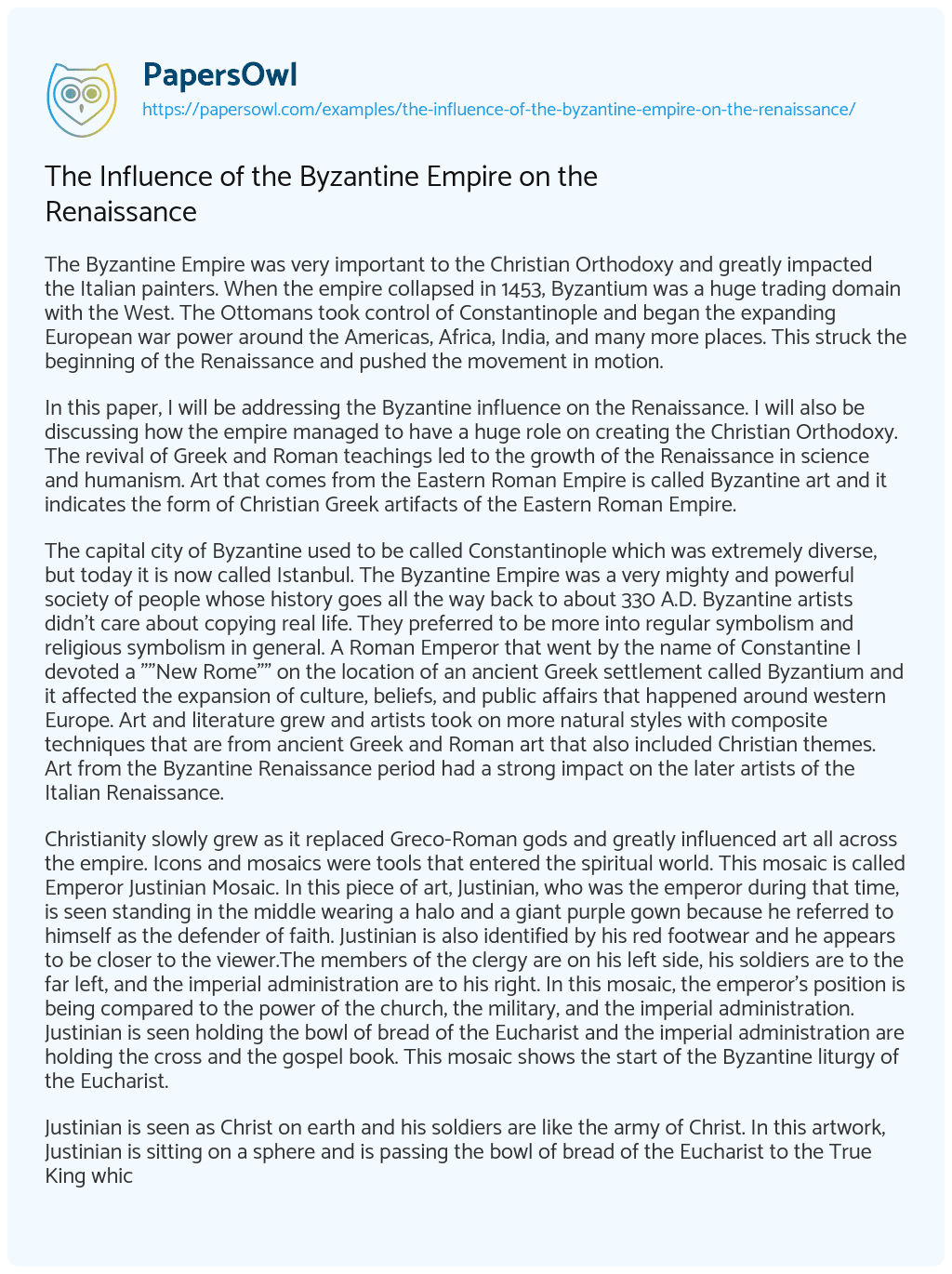 The Byzantine Empire was very important to the Christian Orthodoxy and greatly impacted the Italian painters. When the empire collapsed in 1453, Byzantium was a huge trading domain with the West. The Ottomans took control of Constantinople and began the expanding European war power around the Americas, Africa, India, and many more places. This struck the beginning of the Renaissance and pushed the movement in motion.

In this paper, I will be addressing the Byzantine influence on the Renaissance. I will also be discussing how the empire managed to have a huge role on creating the Christian Orthodoxy. The revival of Greek and Roman teachings led to the growth of the Renaissance in science and humanism. Art that comes from the Eastern Roman Empire is called Byzantine art and it indicates the form of Christian Greek artifacts of the Eastern Roman Empire.

The capital city of Byzantine used to be called Constantinople which was extremely diverse, but today it is now called Istanbul. The Byzantine Empire was a very mighty and powerful society of people whose history goes all the way back to about 330 A.D. Byzantine artists didn’t care about copying real life. They preferred to be more into regular symbolism and religious symbolism in general. A Roman Emperor that went by the name of Constantine I devoted a “”New Rome”” on the location of an ancient Greek settlement called Byzantium and it affected the expansion of culture, beliefs, and public affairs that happened around western Europe. Art and literature grew and artists took on more natural styles with composite techniques that are from ancient Greek and Roman art that also included Christian themes. Art from the Byzantine Renaissance period had a strong impact on the later artists of the Italian Renaissance.

Christianity slowly grew as it replaced Greco-Roman gods and greatly influenced art all across the empire. Icons and mosaics were tools that entered the spiritual world. This mosaic is called Emperor Justinian Mosaic. In this piece of art, Justinian, who was the emperor during that time, is seen standing in the middle wearing a halo and a giant purple gown because he referred to himself as the defender of faith. Justinian is also identified by his red footwear and he appears to be closer to the viewer.The members of the clergy are on his left side, his soldiers are to the far left, and the imperial administration are to his right. In this mosaic, the emperor’s position is being compared to the power of the church, the military, and the imperial administration. Justinian is seen holding the bowl of bread of the Eucharist and the imperial administration are holding the cross and the gospel book. This mosaic shows the start of the Byzantine liturgy of the Eucharist.

Justinian is seen as Christ on earth and his soldiers are like the army of Christ. In this artwork, Justinian is sitting on a sphere and is passing the bowl of bread of the Eucharist to the True King which is known as an act of homage. Angels are seen standing on both sides of him. One of the angels has his hand on the True King and the other one can barely be seen, but his face looks like it is turned away.

This painting is found at St. Catherine’s Monastery in Egypt and it is called the Virgin (Theotokos) and Child between Saints Theodore and George. The medium used in this painting is wax because it helps bring out the color. In this painting, the virgin, Mary, has a halo above her head and is sitting comfortably on a gold throne as she surrounds the Christ is sitting on her lap with her hands on both sides of him. St. Theodore is standing to her left and St. George is at her right. There are two angels looking up at God as heavenly light shines down on her.

In conclusion, the painters of the Renaissance were heavily influenced by Byzantine art because when the empire came to an end, the Byzantine art, religion, and much more continued to spread all over the world which included the Renaissance. Examples of Byzantine art were found in museums and churches. The churches practiced a religion called Eastern Orthodox Christianity which is still be practiced now.

The Influence of the Byzantine Empire on the Renaissance. (2020, Mar 21). Retrieved from https://papersowl.com/examples/the-influence-of-the-byzantine-empire-on-the-renaissance/

The Impact of Christianity in the Byzantine Empire