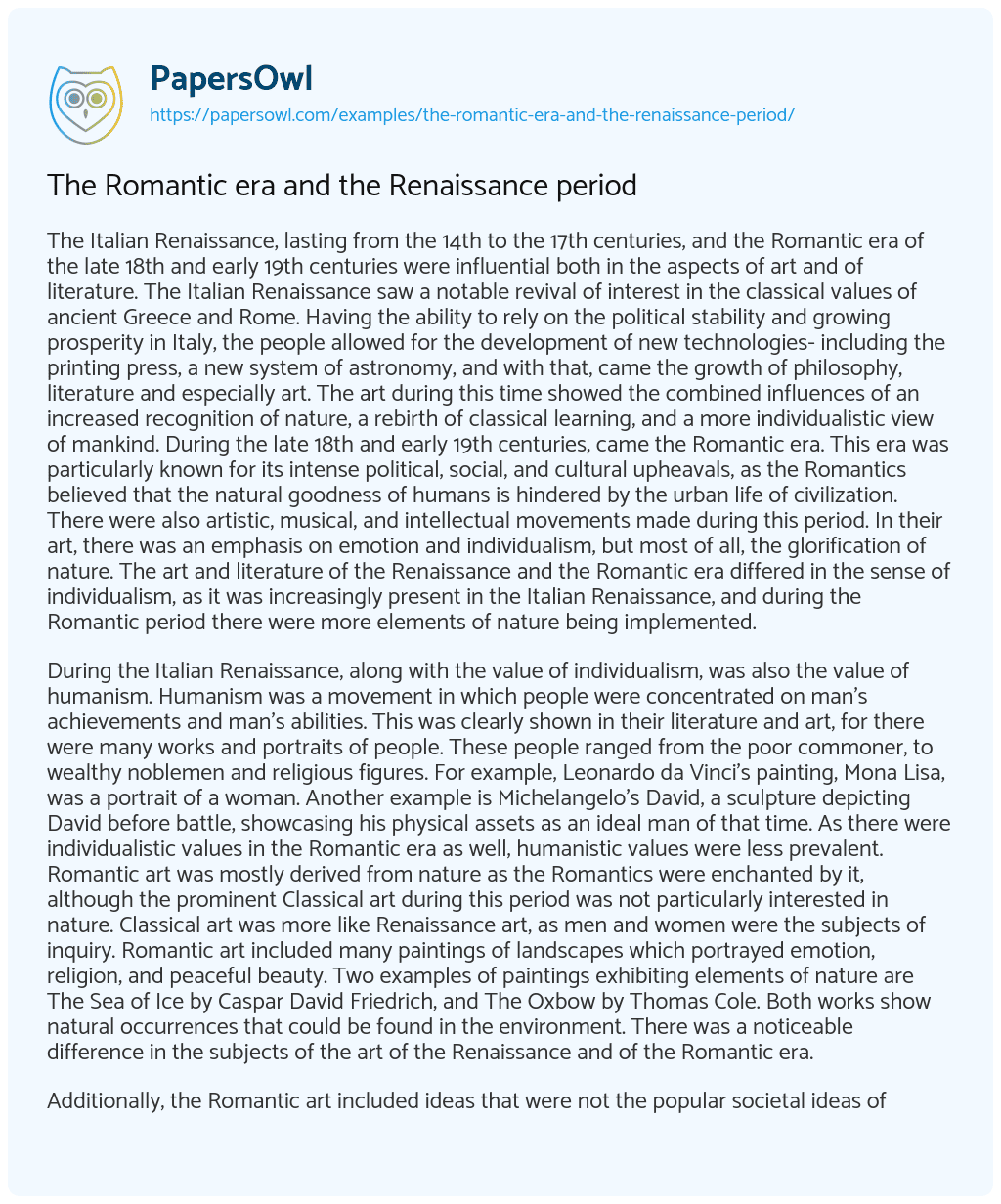 The Italian Renaissance, lasting from the 14th to the 17th centuries, and the Romantic era of the late 18th and early 19th centuries were influential both in the aspects of art and of literature. The Italian Renaissance saw a notable revival of interest in the classical values of ancient Greece and Rome. Having the ability to rely on the political stability and growing prosperity in Italy, the people allowed for the development of new technologies- including the printing press, a new system of astronomy, and with that, came the growth of philosophy, literature and especially art. The art during this time showed the combined influences of an increased recognition of nature, a rebirth of classical learning, and a more individualistic view of mankind. During the late 18th and early 19th centuries, came the Romantic era. This era was particularly known for its intense political, social, and cultural upheavals, as the Romantics believed that the natural goodness of humans is hindered by the urban life of civilization. There were also artistic, musical, and intellectual movements made during this period. In their art, there was an emphasis on emotion and individualism, but most of all, the glorification of nature. The art and literature of the Renaissance and the Romantic era differed in the sense of individualism, as it was increasingly present in the Italian Renaissance, and during the Romantic period there were more elements of nature being implemented.

During the Italian Renaissance, along with the value of individualism, was also the value of humanism. Humanism was a movement in which people were concentrated on man’s achievements and man’s abilities. This was clearly shown in their literature and art, for there were many works and portraits of people. These people ranged from the poor commoner, to wealthy noblemen and religious figures. For example, Leonardo da Vinci’s painting, Mona Lisa, was a portrait of a woman. Another example is Michelangelo’s David, a sculpture depicting David before battle, showcasing his physical assets as an ideal man of that time. As there were individualistic values in the Romantic era as well, humanistic values were less prevalent. Romantic art was mostly derived from nature as the Romantics were enchanted by it, although the prominent Classical art during this period was not particularly interested in nature. Classical art was more like Renaissance art, as men and women were the subjects of inquiry. Romantic art included many paintings of landscapes which portrayed emotion, religion, and peaceful beauty. Two examples of paintings exhibiting elements of nature are The Sea of Ice by Caspar David Friedrich, and The Oxbow by Thomas Cole. Both works show natural occurrences that could be found in the environment. There was a noticeable difference in the subjects of the art of the Renaissance and of the Romantic era.

Additionally, the Romantic art included ideas that were not the popular societal ideas of that time. The prevailing art during the Romantic era was Classical art, but the Romantics opposed Classicist ideas which mostly involved aspects of materialism and the elite class of the people. Romantic art had an emphasis on emotion, and the spiritual inspiration deriving from the beauty in nature. In the times of the Italian Renaissance, it was the opposite. Renaissance art included ideas that were socially accepted during that time, for the principles and values in their society such as humanism and and classicism were depicted in their works. This was a major difference between the arts of the two periods.

The Romantic era began as a reaction to the Enlightenment. The Enlightenment’s primary characteristic was an increased focus on logic and reason in the day- to- day life of the people, much like the Renaissance, as the Renaissance also implemented ideas of logic and reason in their works. The Romantics opposed these ideas. The difference in opinion was reflected in each period’s art and writing. During the Italian Renaissance, Greek philosophers such as Socrates held a considerable amount of influence on the writers of that time. Socrates particularly had skeptical tendencies, and caused humanist scholars of the Renaissance who studied his works to introduce the tradition of classical skepticism as an element of modern thought. Skepticism encouraged logic and reason, as this idea was carried out into the Enlightenment as well. Another example of this during the Renaissance is Thomas More’s Utopia which described an ideal island on which social and political customs are entirely governed by reason. Again, this showed the emphasis on these values during Renaissance times. In the Romantic era, it was believed that logic was cold and mechanical, and the true source of knowledge could be found by a communion with nature and looking into human emotions. They said that man could learn from logical process, but could potentially learn much more from their intuitive feelings within. Poets of this age such as Robert Burns and William Wordsworth expressed the emphasis on personal feeling and man’s emotional highs and lows. Wordsworth especially depicted both prominent values of the Romantic era by including both ideas of love and nature in his work. For example, in his poem Daffodils, he expresses happiness, simplicity, and love that he feels as a result of experiencing nature’s beauty.

In summation, both the Romantic era and the Renaissance period included ideas of individualism, but Romantic artists and writers had leaned more towards the various elements of nature and human emotion. Artists and writers of the Italian Renaissance had more of a humanistic point of view, as they focused on man and his abilities, and their ideas included aspects of logic and reason- which were strongly opposed by the Romantics. Romantic works and Renaissance works differed in their characteristics and ways of thought.

The Romantic era and the Renaissance period. (2020, Mar 05). Retrieved from https://papersowl.com/examples/the-romantic-era-and-the-renaissance-period/

The Renaissance Period during the 1400 Century in Florence Italy