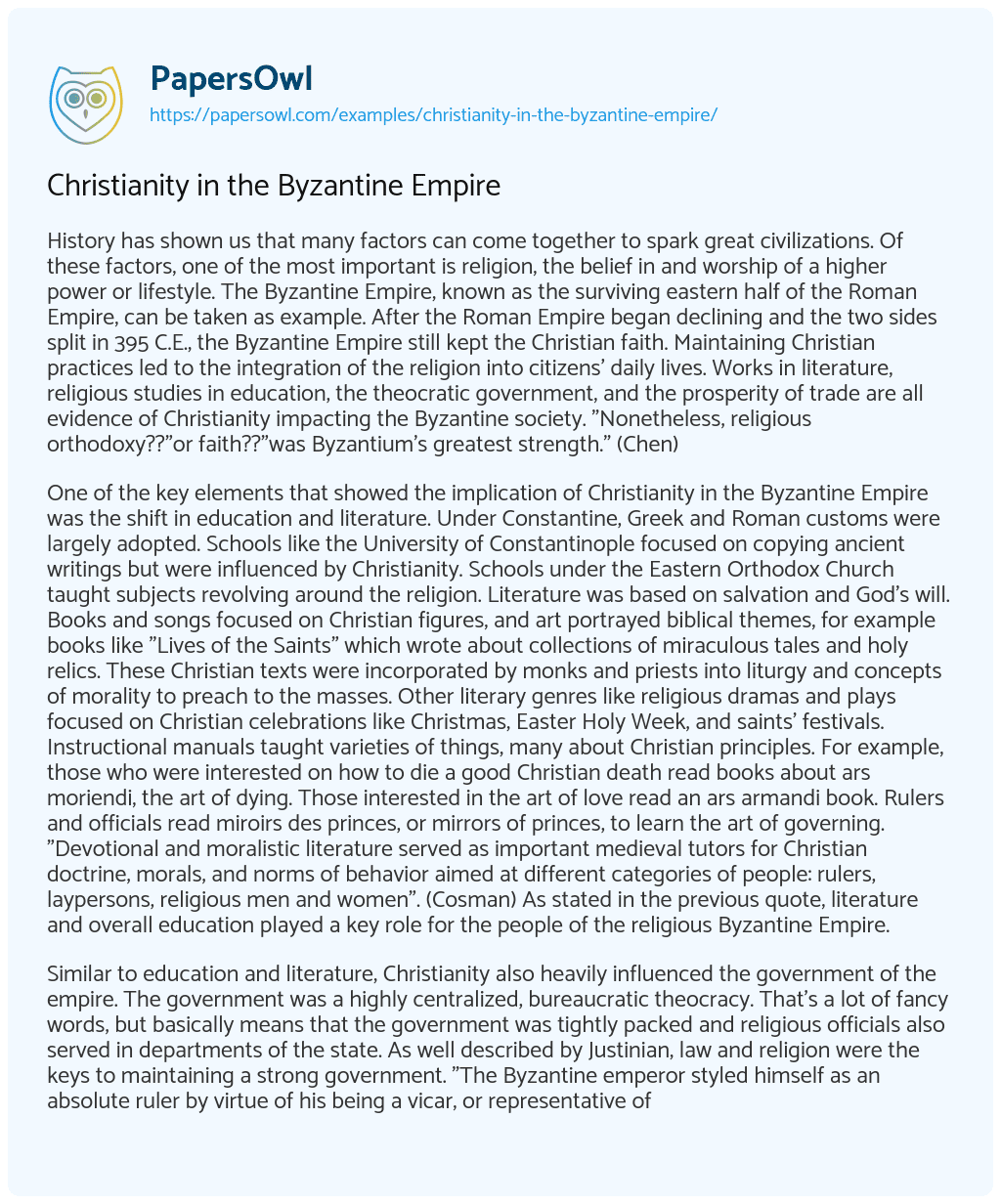 History has shown us that many factors can come together to spark great civilizations. Of these factors, one of the most important is religion, the belief in and worship of a higher power or lifestyle. The Byzantine Empire, known as the surviving eastern half of the Roman Empire, can be taken as example. After the Roman Empire began declining and the two sides split in 395 C.E., the Byzantine Empire still kept the Christian faith. Maintaining Christian practices led to the integration of the religion into citizens’ daily lives. Works in literature, religious studies in education, the theocratic government, and the prosperity of trade are all evidence of Christianity impacting the Byzantine society. “Nonetheless, religious orthodoxy??”or faith??”was Byzantium’s greatest strength.” (Chen)

One of the key elements that showed the implication of Christianity in the Byzantine Empire was the shift in education and literature. Under Constantine, Greek and Roman customs were largely adopted. Schools like the University of Constantinople focused on copying ancient writings but were influenced by Christianity. Schools under the Eastern Orthodox Church taught subjects revolving around the religion. Literature was based on salvation and God’s will. Books and songs focused on Christian figures, and art portrayed biblical themes, for example books like “Lives of the Saints” which wrote about collections of miraculous tales and holy relics. These Christian texts were incorporated by monks and priests into liturgy and concepts of morality to preach to the masses. Other literary genres like religious dramas and plays focused on Christian celebrations like Christmas, Easter Holy Week, and saints’ festivals. Instructional manuals taught varieties of things, many about Christian principles. For example, those who were interested on how to die a good Christian death read books about ars moriendi, the art of dying. Those interested in the art of love read an ars armandi book. Rulers and officials read miroirs des princes, or mirrors of princes, to learn the art of governing. “Devotional and moralistic literature served as important medieval tutors for Christian doctrine, morals, and norms of behavior aimed at different categories of people: rulers, laypersons, religious men and women”. (Cosman) As stated in the previous quote, literature and overall education played a key role for the people of the religious Byzantine Empire.

Similar to education and literature, Christianity also heavily influenced the government of the empire. The government was a highly centralized, bureaucratic theocracy. That’s a lot of fancy words, but basically means that the government was tightly packed and religious officials also served in departments of the state. As well described by Justinian, law and religion were the keys to maintaining a strong government. “The Byzantine emperor styled himself as an absolute ruler by virtue of his being a vicar, or representative of Christ…” (Cosman) The emperor not only served as the supreme head, but also as the chief priest. In 313 AD, Emperor Constantine granted Christians religious freedom. Constantine also established church organizations, and the capital of Constantinople eventually became a center of Christendom. Roman emperor Theodosius issued Christianity as the official state religion and convened general councils of the church in Constantinople. Political disputes with Rome led to the Great Schism, the religious split in churches between the east and west. After the Eastern Orthodox Church was established, changing the way Christianity existed in the empire. Indeed, Christianity molded the way the government grew and adopted, whether it affected the military, state, or politics.

Many factors come into play when talking about the prosperity of the Byzantine Empire, as seen from the rise in government, education, and literature due to the embracement of Christianity. As the empire grew, trade with other societies grew. Due to the geographical location of Constantinople, trade expediently bloomed with the Mediterranean area, northern Europe, China, and India. Even more so, Byzantine gold coins were used as common currency around the Mediterranean. Varying degrees helped trade prosper, for example the already thriving Silk Road, the spread of Christian merchants, the spread of Islam, and the Jewish Diaspora. In summary, Christianity aiding the empire induced growth, further leading to improved trade. As towns expanded, trade flourished.

All in all, Christianity thoroughly impacted the government, education, literature, and trade of the Byzantine Empire. Not only did the religion have a lasting effect on the empire, but traces of Christianity’s legacy can be seen all throughout history. “Long after its end, Byzantine culture and civilization continued to exercise influence on countries that practiced its Orthodox religion…” (History.com Editors)

Christianity in the Byzantine Empire. (2019, Mar 12). Retrieved from https://papersowl.com/examples/christianity-in-the-byzantine-empire/

The Impact of Christianity in the Byzantine Empire

The Influence of the Byzantine Empire on the Renaissance