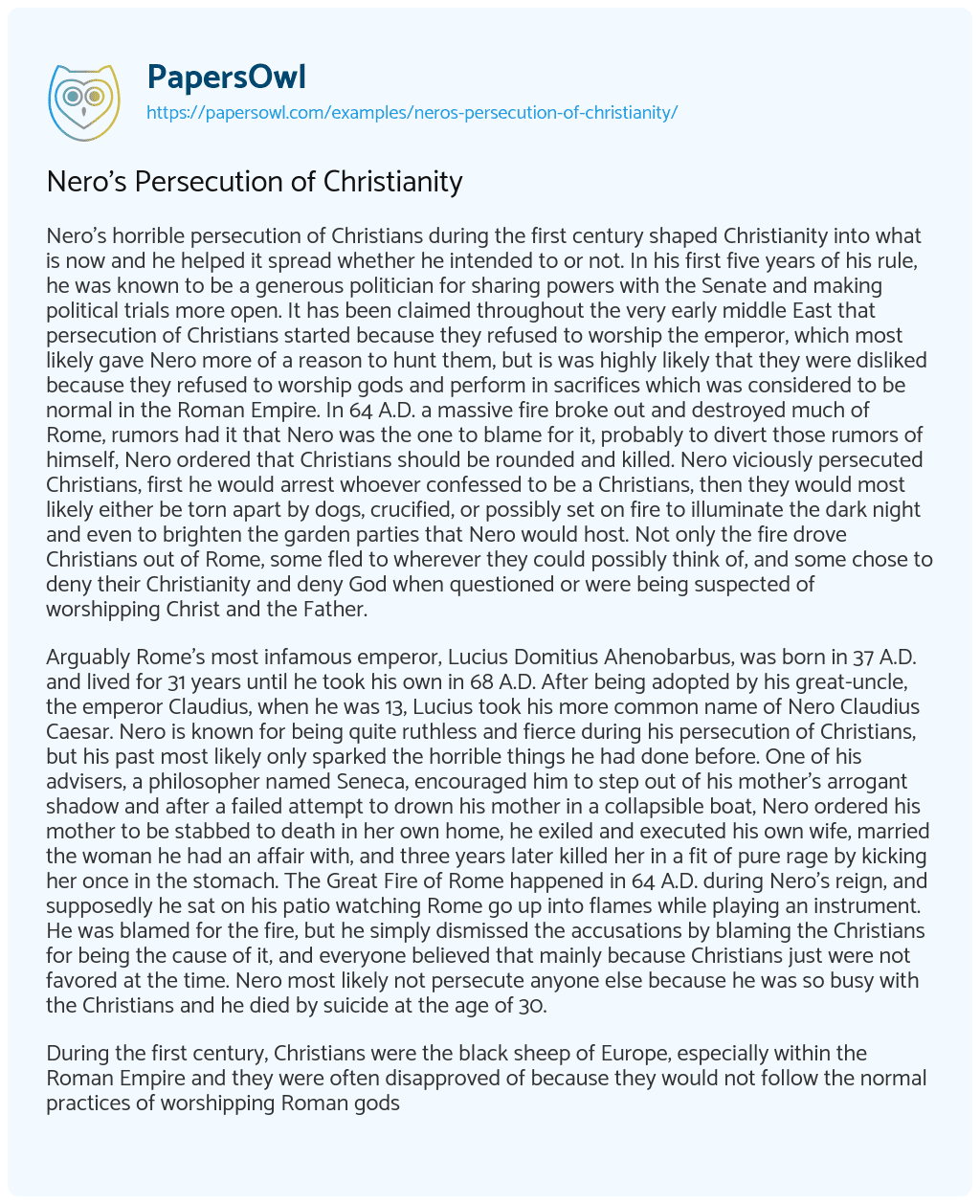 Nero’s horrible persecution of Christians during the first century shaped Christianity into what is now and he helped it spread whether he intended to or not. In his first five years of his rule, he was known to be a generous politician for sharing powers with the Senate and making political trials more open. It has been claimed throughout the very early middle East that persecution of Christians started because they refused to worship the emperor, which most likely gave Nero more of a reason to hunt them, but is was highly likely that they were disliked because they refused to worship gods and perform in sacrifices which was considered to be normal in the Roman Empire. In 64 A.D. a massive fire broke out and destroyed much of Rome, rumors had it that Nero was the one to blame for it, probably to divert those rumors of himself, Nero ordered that Christians should be rounded and killed. Nero viciously persecuted Christians, first he would arrest whoever confessed to be a Christians, then they would most likely either be torn apart by dogs, crucified, or possibly set on fire to illuminate the dark night and even to brighten the garden parties that Nero would host. Not only the fire drove Christians out of Rome, some fled to wherever they could possibly think of, and some chose to deny their Christianity and deny God when questioned or were being suspected of worshipping Christ and the Father.

Arguably Rome’s most infamous emperor, Lucius Domitius Ahenobarbus, was born in 37 A.D. and lived for 31 years until he took his own in 68 A.D. After being adopted by his great-uncle, the emperor Claudius, when he was 13, Lucius took his more common name of Nero Claudius Caesar. Nero is known for being quite ruthless and fierce during his persecution of Christians, but his past most likely only sparked the horrible things he had done before. One of his advisers, a philosopher named Seneca, encouraged him to step out of his mother’s arrogant shadow and after a failed attempt to drown his mother in a collapsible boat, Nero ordered his mother to be stabbed to death in her own home, he exiled and executed his own wife, married the woman he had an affair with, and three years later killed her in a fit of pure rage by kicking her once in the stomach. The Great Fire of Rome happened in 64 A.D. during Nero’s reign, and supposedly he sat on his patio watching Rome go up into flames while playing an instrument. He was blamed for the fire, but he simply dismissed the accusations by blaming the Christians for being the cause of it, and everyone believed that mainly because Christians just were not favored at the time. Nero most likely not persecute anyone else because he was so busy with the Christians and he died by suicide at the age of 30.

During the first century, Christians were the black sheep of Europe, especially within the Roman Empire and they were often disapproved of because they would not follow the normal practices of worshipping Roman gods and taking part of sacrificial ceremonies. Not only did Christians refuse to partake in sacrifices to the gods, but also to the somewhat godly emperor, and because of this the pagans thought of them as committing treason to the Roman Empire. It was obvious that they were not the favorite group of people of Europe, and Nero used that to his advantage by blaming them for the fire and consequently, viciously and relentlessly persecuting them as well. Christians were accused of incest and cannibalism most likely because they would refer to each other as brothers and sisters, and because they drink Christ’s blood and eat his body during communion even though it is simply wine and bread. One of the first instincts of someone who is being hunted down for what they believe in, is to run or hide in a safe place. Some Christians however, decided to stay and deny their faith when questioned or would rat out friends and even their own families for their own protection and gain. The Roman Empire at the time was absolutely huge, so it was incredibly hard to flee from the grasp that Nero had over them. Most of the land surrounding the Mediterranean Sea was under Nero’s control so even if they crossed the sea, they would not escape the Roman soldiers that were lurking at nearly every corner someone would come across.

While Christians were running for their lives, they brought some possessions with them if they got the chance, but most importantly, they brought the Word of God with them as well. One of the duties of a Christian is to spread the good news wherever you may go, and that is exactly what happened when they were been chased out of the Roman Empire beginning in 64 A.D. and the Word has been travelling since then, and even before that as well. News cannot travel if the people who know it do not travel or share it, and Christians were forced to move from their homes and they shared the good news despite running for their lives and being persecuted. Christians were terrified of losing their lives or being tortured so they ran as far as they could. They ran to Sarmatia, Armenia, Mesopotamia, and anywhere else they could find that wasn’t under the influence of the sixth Roman emperor. By the year 325 A.D. nearly 2 million Christians died because of their faith and Nero was large contributing factor to that number.

Nero was a very cruel and evil person, it is even known that people in the first century and even now refer to him as the devil himself. Nero is rumored to be the cause of the Great Fire of Rome after he ordered his guards and soldiers to set the empire aflame and thousands of people died either because of the fire, the smoke, or being crushed to death by the ruins. Nero had an incredibly sick and twisted mind and that shows in his different types of methods that he used against Christians. By sewing up some in skins of wild animals, dressed others in shirts made stiff with wax, fixed to axletrees, and set on fire in his gardens, in order to illuminate them, but also to warn any other Christian that saw it. By doing all of these unforgivable things, Nero basically opened the gateway of the persecution of Christianity.

Nero was the sixth emperor of the Roman Empire and arguably the most infamous one as well. He persistently persecuted innocent Christians and had sentenced thousands, if not more, of them to be horribly tortured and to have very gruesome and painful deaths. The Great Fire of Rome in 64 A.D. is what sparked controversy around Nero, but he simply pushed the rumors off of himself and on to the Christians because they were the outcasts of society at that time. While the Christians were fleeing for their lives, they preached the gospel as they did so Nero helped spread the Word of God whether he meant to or not. His horrible persecution of Christians during the first century shaped Christianity into what is now and helped spread it around the world.

Rise of Christianity in Rome

Differences between Judaism and Christianity