The Relationship between Religion and Politics in the United States 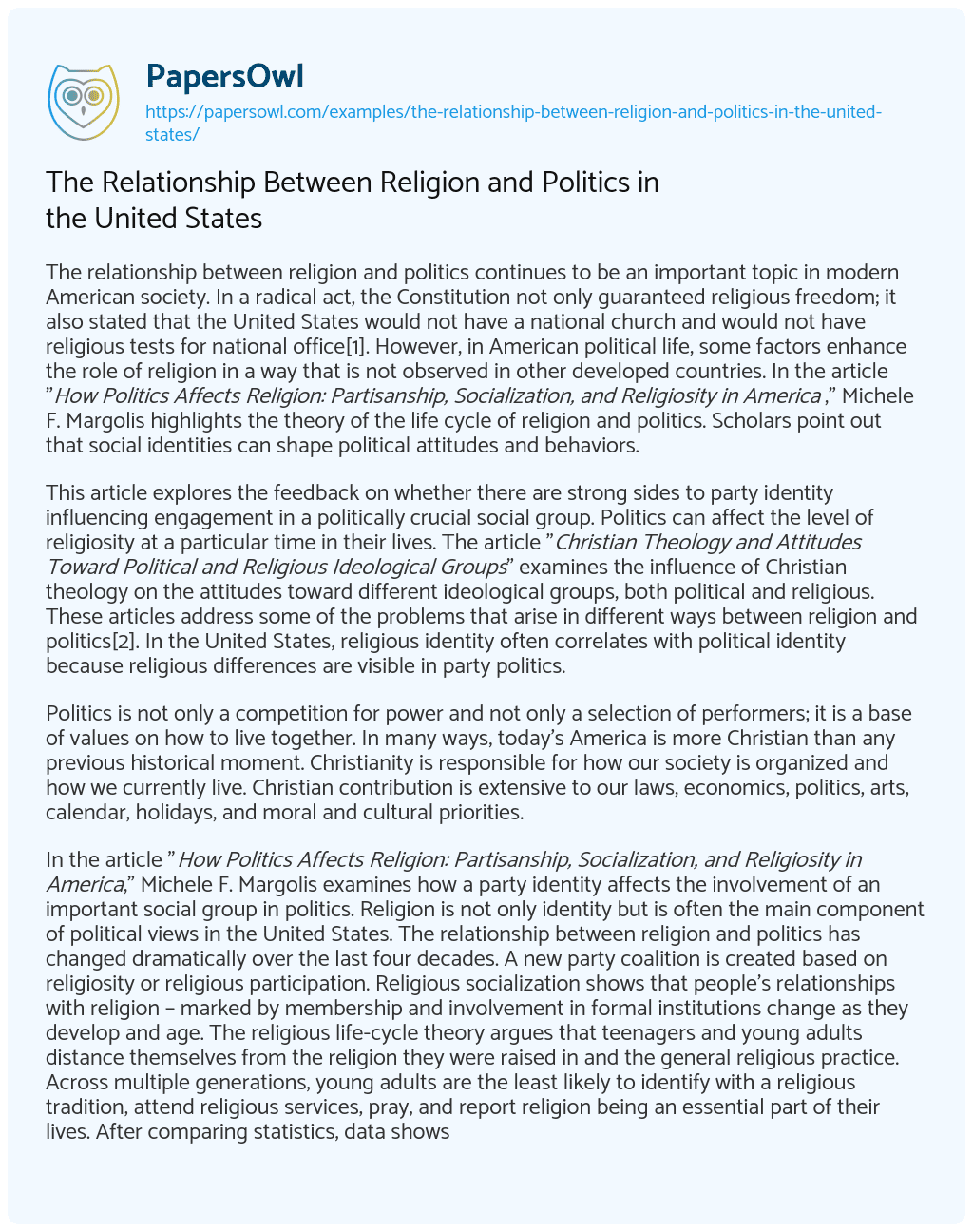 The relationship between religion and politics continues to be an important topic in modern American society. In a radical act, the Constitution not only guaranteed religious freedom; it also stated that the United States would not have a national church and would not have religious tests for national office[1]. However, in American political life, some factors enhance the role of religion in a way that is not observed in other developed countries. In the article “How Politics Affects Religion: Partisanship, Socialization, and Religiosity in America,” Michele F. Margolis highlights the theory of the life cycle of religion and politics. Scholars point out that social identities can shape political attitudes and behaviors.

This article explores the feedback on whether there are strong sides to party identity influencing engagement in a politically crucial social group. Politics can affect the level of religiosity at a particular time in their lives. The article “Christian Theology and Attitudes Toward Political and Religious Ideological Groups” examines the influence of Christian theology on the attitudes toward different ideological groups, both political and religious. These articles address some of the problems that arise in different ways between religion and politics[2]. In the United States, religious identity often correlates with political identity because religious differences are visible in party politics.

Politics is not only a competition for power and not only a selection of performers; it is a base of values on how to live together. In many ways, today’s America is more Christian than any previous historical moment. Christianity is responsible for how our society is organized and how we currently live. Christian contribution is extensive to our laws, economics, politics, arts, calendar, holidays, and moral and cultural priorities.

In the article “How Politics Affects Religion: Partisanship, Socialization, and Religiosity in America,” Michele F. Margolis examines how a party identity affects the involvement of an important social group in politics. Religion is not only identity but is often the main component of political views in the United States. The relationship between religion and politics has changed dramatically over the last four decades. A new party coalition is created based on religiosity or religious participation. Religious socialization shows that people’s relationships with religion – marked by membership and involvement in formal institutions change as they develop and age. The religious life-cycle theory argues that teenagers and young adults distance themselves from the religion they were raised in and the general religious practice. Across multiple generations, young adults are the least likely to identify with a religious tradition, attend religious services, pray, and report religion being an essential part of their lives. After comparing statistics, data shows that from 1965 to 1973, students from both Republican and Democratic parties attended church nearly twice less often. There is usually a noticeable return to religion and to religious participation after marriage and when educating children, but sometimes it doesn’t happen at all[3]

Party spirit can affect religiosity. “The ‘impressionable years‘ hypothesis claims that adolescents and young adults are highly impressionable. It further states that outside influences and events can shape young people’s political outlooks, including partisan identification”[4]. The party-hood developing in young people’s lives is more than a political party, a powerful identity that often lasts a lifetime and influences other settings and behavior. The partnership generates economic assessments, confidence in the government, and a sense of fairness in elections, consumption, and spending.

George Yancey, Marie A. Eisenstein, and Ryan P. Burge, in “Christian Theology and Attitudes Toward Political and Religious Ideological Groups,” have shown the influence of Christian theology on attitudes towards different ideological groups, both political and religious[5]. The study describes how religious affiliation, behavior, and belief in the United States affect voting and political party affiliation. Progressive Christians more often show an unfavourable attitude towards groups with political differences than conservative Christians. “The values of progressive Christians and their denominations have moved from absolutism claims to an emphasis on tolerance and acceptance.” On the other hand, conservative Christians more often show a negative attitude toward groups with religious differences than progressive Christians[6].

Therefore, theological differences between Christians are often divided into different levels of conservatism and progressivism. Rationality and human wisdom are essential when making choices and facing different social problems. Conservative Christians, as opposed to progressive, rely on “authoritative scripture as the last word of their moral vision.” They stick to traditional thinking, according to which their beliefs should match with the information in the Bible. The importance of God’s word is a valuable indicator of the various Christian views that form their attitude towards other political or religious groups. Adopting the Bible as the most significant authority makes conservative Christians less prepared to be flexible in their search for truth. “This critical theological difference means conservative Christians are less likely to adopt modern social innovations such as same-sex marriage, abortion and divorce due to their allegiances to traditional values and practices in the Bible.”

Those who adopt a progressive form of Christianity may prioritize political goals more than those adopting a conservative Christian ideology[7]. Although the United States is at the same time religiously diverse and very religious, “interreligious relations exhibit more comity than conflict.”Modern Democrats usually refer to values of justice, tolerance, and the republicans to traditional conservative views.

In America, religion is an essential part of social life. Despite the constitutional dividing wall between church and state, national politicians refer to religion in great speeches. The President always asks God to bless America, sending his prayers to the disaster victims, accepting religious leaders, and praising religious values. Such propaganda of religion is unheard of in Europe. However, it may be because the majority is not religious, and the native populations, as opposed to immigrants, are not very religious.

The Christians of the United States, under the banner of “the moral majority,” have made a significant movement to influence political leaders since the 1970s and introduced religion into a political debate[8]. Immigrants’ religious disposition means they are receptive to the conservative spiritual message and can be persuaded to vote across class lines. By doing that, they support a plan that favors the wealthy and makes them even poorer. American politicians talk a lot about religion. Nevertheless, they have nothing to do with theocracy, such as the Taliban. Paradoxically, the US conservatives went to war in Afghanistan to separate religion from politics abroad while striving to unite religion and politics at home. Many poor people in America risk losing their economic interests by voting for republican politicians interested in further concentrating wealth in the hands of the rich. They do so partially because the republicans appeal to their religious ideology.

Studies show that democrats are less religious than republicans. This pattern arose from religious beliefs affecting the political identity, but there is also a reverse relationship. These articles show that political identities can form religious relations. Party-hood tends to crystallize at a young age and early adulthood when most young people in the United States move away from the religion in which they were brought up and religious practice in general. However, young people must decide whether to stay out of religion or return to the religious sphere when they move into adulthood. Political identity, which for many has been built since their young years, can help to form a new spiritual identity. Religious belonging increases suffering among the poor since poverty is associated with increased religiousness. The worse their living conditions are, the greater chances they will support the leading party. This seems to be another great reason for separating the church from the state.

Party divisions for republicans and democrats do not simply reflect social disagreements, but they also help to create them. Americans can rely on their commitment to religious decisions as long as parties and party elites recognize differences in issues related to religion and morals. The life cycle theory explains when politics most likely affects religion at the individual level, rejecting the assumption that politics should have a single effect on different types of people.

The Relationship Between Religion and Politics in the United States. (2021, Mar 05). Retrieved from https://papersowl.com/examples/the-relationship-between-religion-and-politics-in-the-united-states/

The Relationship between Homosexuality and Religion

The Love/Hate Relationship between Religion and the LBGTQIA Community