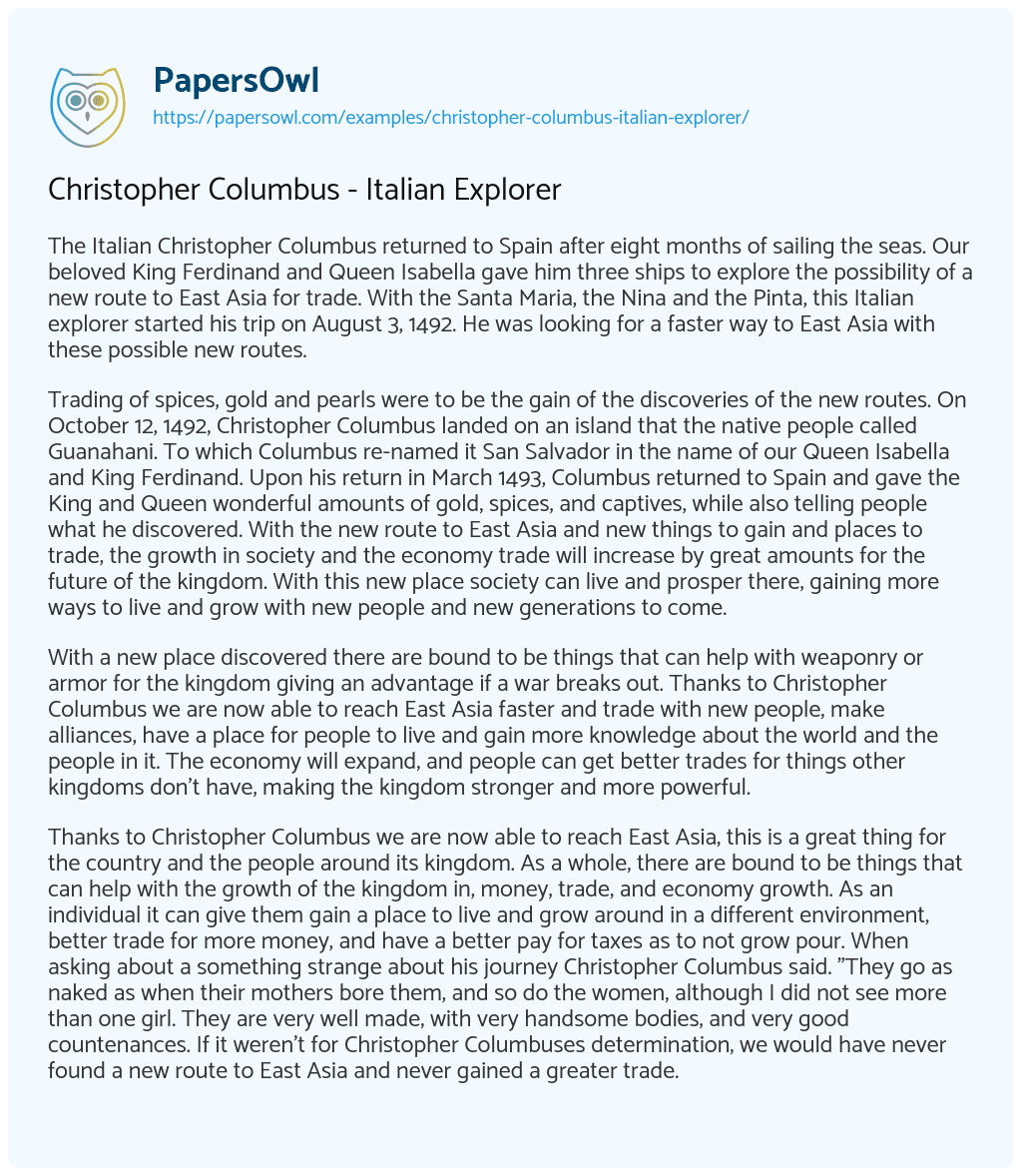 The Italian Christopher Columbus returned to Spain after eight months of sailing the seas. Our beloved King Ferdinand and Queen Isabella gave him three ships to explore the possibility of a new route to East Asia for trade. With the Santa Maria, the Nina and the Pinta, this Italian explorer started his trip on August 3, 1492. He was looking for a faster way to East Asia with these possible new routes.

Trading of spices, gold and pearls were to be the gain of the discoveries of the new routes. On October 12, 1492, Christopher Columbus landed on an island that the native people called Guanahani. To which Columbus re-named it San Salvador in the name of our Queen Isabella and King Ferdinand. Upon his return in March 1493, Columbus returned to Spain and gave the King and Queen wonderful amounts of gold, spices, and captives, while also telling people what he discovered. With the new route to East Asia and new things to gain and places to trade, the growth in society and the economy trade will increase by great amounts for the future of the kingdom. With this new place society can live and prosper there, gaining more ways to live and grow with new people and new generations to come.

With a new place discovered there are bound to be things that can help with weaponry or armor for the kingdom giving an advantage if a war breaks out. Thanks to Christopher Columbus we are now able to reach East Asia faster and trade with new people, make alliances, have a place for people to live and gain more knowledge about the world and the people in it. The economy will expand, and people can get better trades for things other kingdoms don’t have, making the kingdom stronger and more powerful.

Thanks to Christopher Columbus we are now able to reach East Asia, this is a great thing for the country and the people around its kingdom. As a whole, there are bound to be things that can help with the growth of the kingdom in, money, trade, and economy growth. As an individual it can give them gain a place to live and grow around in a different environment, better trade for more money, and have a better pay for taxes as to not grow pour. When asking about a something strange about his journey Christopher Columbus said. “They go as naked as when their mothers bore them, and so do the women, although I did not see more than one girl. They are very well made, with very handsome bodies, and very good countenances. If it weren’t for Christopher Columbuses determination, we would have never found a new route to East Asia and never gained a greater trade.