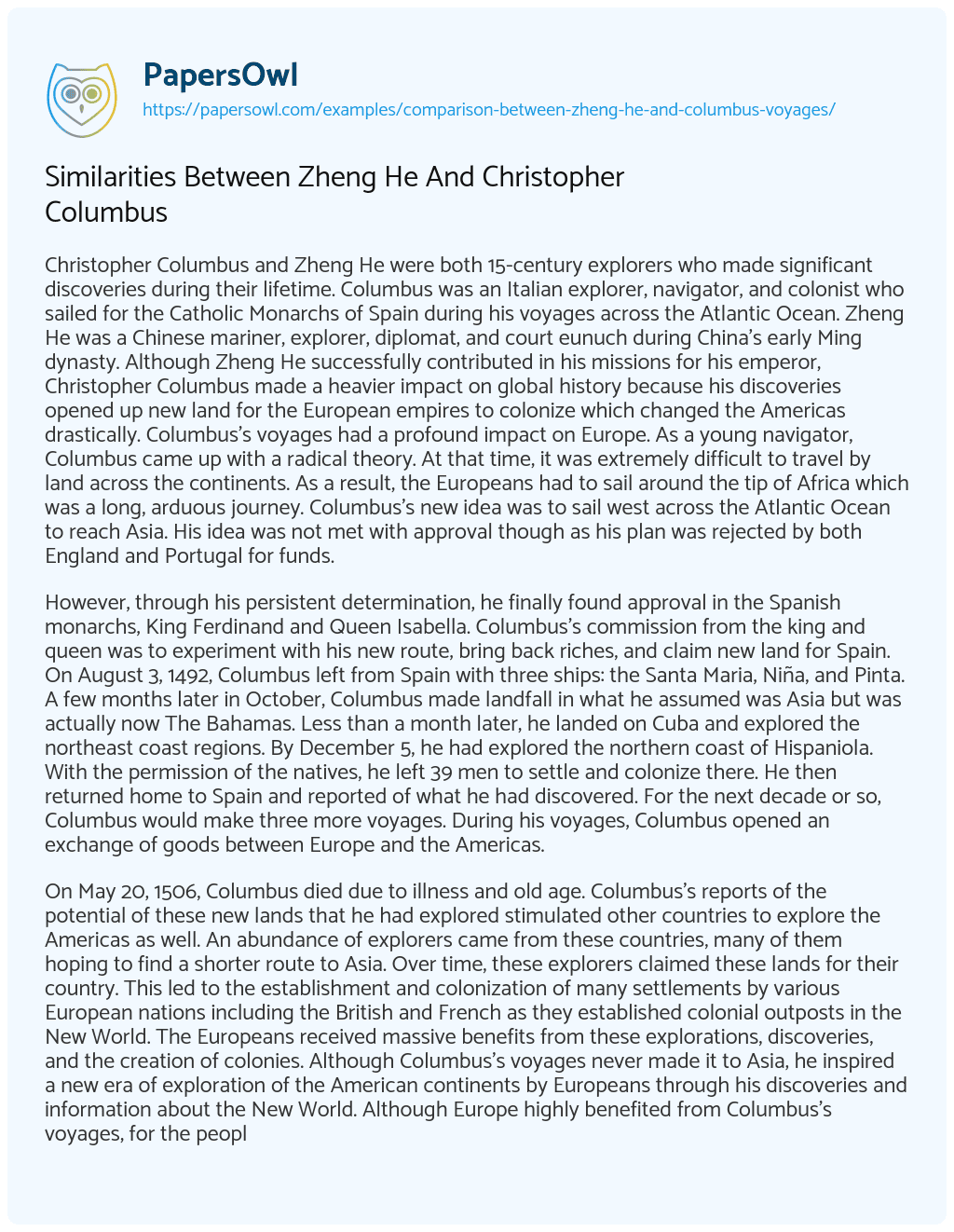 Christopher Columbus and Zheng He were both 15-century explorers who made significant discoveries during their lifetime. Columbus was an Italian explorer, navigator, and colonist who sailed for the Catholic Monarchs of Spain during his voyages across the Atlantic Ocean. Zheng He was a Chinese mariner, explorer, diplomat, and court eunuch during China’s early Ming dynasty. Although Zheng He successfully contributed in his missions for his emperor, Christopher Columbus made a heavier impact on global history because his discoveries opened up new land for the European empires to colonize which changed the Americas drastically. Columbus’s voyages had a profound impact on Europe. As a young navigator, Columbus came up with a radical theory. At that time, it was extremely difficult to travel by land across the continents. As a result, the Europeans had to sail around the tip of Africa which was a long, arduous journey. Columbus’s new idea was to sail west across the Atlantic Ocean to reach Asia. His idea was not met with approval though as his plan was rejected by both England and Portugal for funds.

However, through his persistent determination, he finally found approval in the Spanish monarchs, King Ferdinand and Queen Isabella. Columbus’s commission from the king and queen was to experiment with his new route, bring back riches, and claim new land for Spain. On August 3, 1492, Columbus left from Spain with three ships: the Santa Maria, Niña, and Pinta. A few months later in October, Columbus made landfall in what he assumed was Asia but was actually now The Bahamas. Less than a month later, he landed on Cuba and explored the northeast coast regions. By December 5, he had explored the northern coast of Hispaniola. With the permission of the natives, he left 39 men to settle and colonize there. He then returned home to Spain and reported of what he had discovered. For the next decade or so, Columbus would make three more voyages. During his voyages, Columbus opened an exchange of goods between Europe and the Americas.

On May 20, 1506, Columbus died due to illness and old age. Columbus’s reports of the potential of these new lands that he had explored stimulated other countries to explore the Americas as well. An abundance of explorers came from these countries, many of them hoping to find a shorter route to Asia. Over time, these explorers claimed these lands for their country. This led to the establishment and colonization of many settlements by various European nations including the British and French as they established colonial outposts in the New World. The Europeans received massive benefits from these explorations, discoveries, and the creation of colonies. Although Columbus’s voyages never made it to Asia, he inspired a new era of exploration of the American continents by Europeans through his discoveries and information about the New World. Although Europe highly benefited from Columbus’s voyages, for the people native to the Americas, Columbus’s coming only brought disaster.

Many native societies in the Americas were almost universally destroyed or at least greatly altered by the Europeans who followed Columbus. Often times, the European settlers forced the natives off of their ancestral lands, killing many in the process. In addition, the settlers also brought a plethora of diseases which raged throughout the New World, killing tremendous amounts of natives. The eventual creation of the U.S. was also a result of the period of colonization that Columbus’s voyages started. The creation of the U.S.A. helped, among other things, to move much of the world towards democracy. The existence of the U.S.A. was made possible by Columbus’s legacy of colonization in America and therefore, one of the ways in which Columbus’s discovery changed history. On the other hand, Zheng He’s life nor his legacy did not cause anything of global significance.

Zheng He, born Ma He, was born in the Chinese province of Yunnan. He was captured at the age of 10 and was sent to serve the household of the emperor’s fourth son, Zhu Di during the early Ming dynasty. Zhu Di eventually came to the throne and proclaimed himself as Emperor Yongle. He then changed Ma He’s name to Zheng He and made him in charge of the servants. Zheng He proved himself to be an intelligent leader and strong fighter. Emperor Yongle tasked Zheng He with the construction and commanding of 3,500 ships. Zheng He’s first trip served as a way to obtain recognition and gifts from other rulers.

The fleet had no intention to colonize or conquer. During Zheng He’s diplomatic voyage, he traveled through the South China Sea, the Indian Ocean as well as India, and back to China. However, after the death of Emperor Yongle, Zheng He’s voyages were halted. Zheng He died on his seventh voyage at sea and was buried off the coast of India. Zheng He introduced many fascinating things from foreign places to his country, expanded trade, and spreaded China’s diplomatic amity to other rulers. Although Zheng He left a legacy for his people, the Chinese, Christopher Columbus left a heavier mark on history because his discoveries and voyages affected people around the world. His discoveries introduced new land for Europe and radically changed the Americas in the western hemisphere. Christopher Columbus’s discoveries and voyages opened the door for more explorations to a New World.

Similarities Between Zheng He And Christopher Columbus. (2019, Jan 31). Retrieved from https://papersowl.com/examples/comparison-between-zheng-he-and-columbus-voyages/