How Christopher Columbus Discovered the Caribbeans 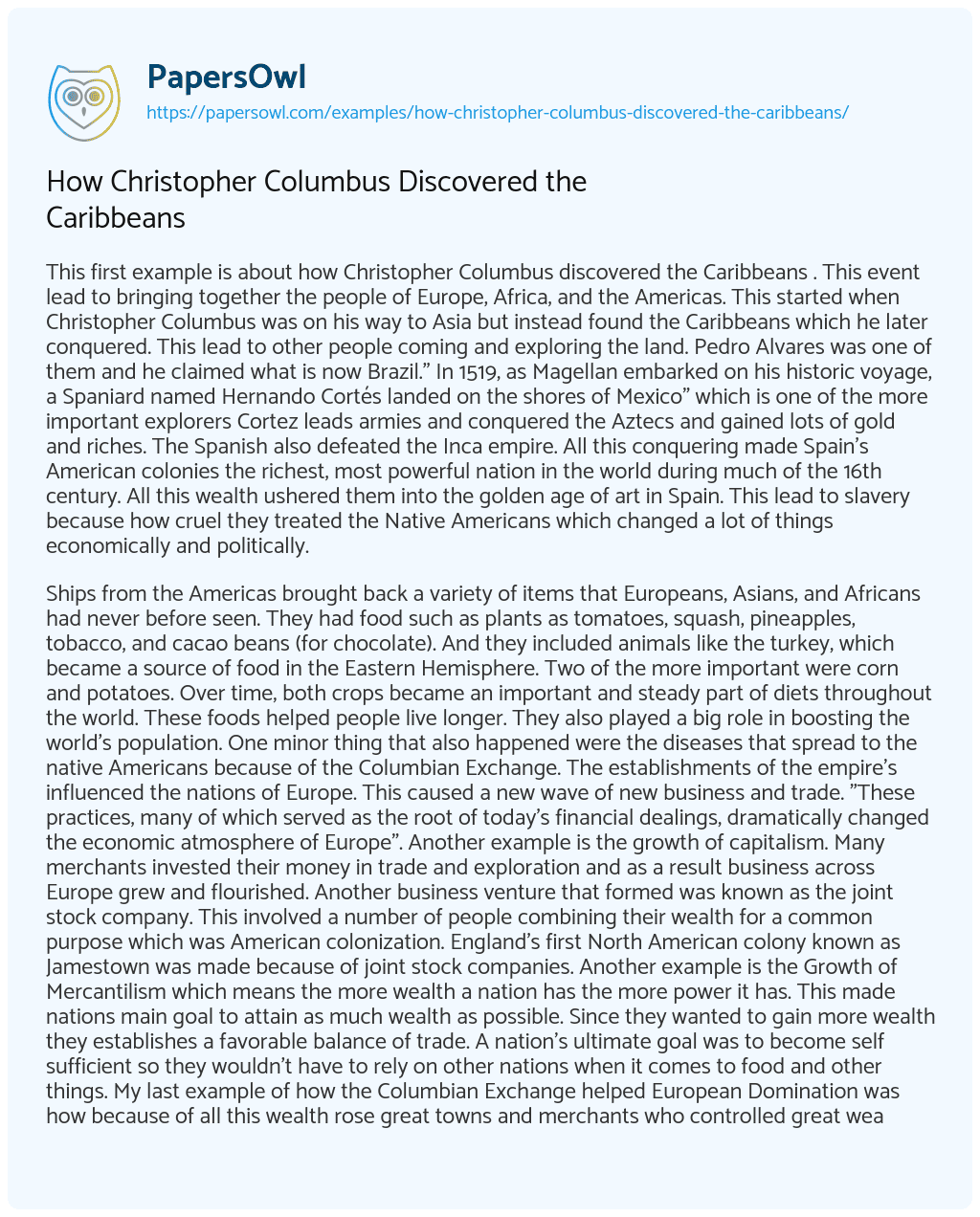 This first example is about how Christopher Columbus discovered the Caribbeans . This event lead to bringing together the people of Europe, Africa, and the Americas. This started when Christopher Columbus was on his way to Asia but instead found the Caribbeans which he later conquered. This lead to other people coming and exploring the land. Pedro Alvares was one of them and he claimed what is now Brazil.” In 1519, as Magellan embarked on his historic voyage, a Spaniard named Hernando Cortés landed on the shores of Mexico” which is one of the more important explorers Cortez leads armies and conquered the Aztecs and gained lots of gold and riches. The Spanish also defeated the Inca empire. All this conquering made Spain’s American colonies the richest, most powerful nation in the world during much of the 16th century. All this wealth ushered them into the golden age of art in Spain. This lead to slavery because how cruel they treated the Native Americans which changed a lot of things economically and politically.

Ships from the Americas brought back a variety of items that Europeans, Asians, and Africans had never before seen. They had food such as plants as tomatoes, squash, pineapples, tobacco, and cacao beans (for chocolate). And they included animals like the turkey, which became a source of food in the Eastern Hemisphere. Two of the more important were corn and potatoes. Over time, both crops became an important and steady part of diets throughout the world. These foods helped people live longer. They also played a big role in boosting the world’s population. One minor thing that also happened were the diseases that spread to the native Americans because of the Columbian Exchange. The establishments of the empire’s influenced the nations of Europe. This caused a new wave of new business and trade. “These practices, many of which served as the root of today’s financial dealings, dramatically changed the economic atmosphere of Europe”. Another example is the growth of capitalism. Many merchants invested their money in trade and exploration and as a result business across Europe grew and flourished. Another business venture that formed was known as the joint stock company. This involved a number of people combining their wealth for a common purpose which was American colonization. England’s first North American colony known as Jamestown was made because of joint stock companies. Another example is the Growth of Mercantilism which means the more wealth a nation has the more power it has. This made nations main goal to attain as much wealth as possible. Since they wanted to gain more wealth they establishes a favorable balance of trade. A nation’s ultimate goal was to become self sufficient so they wouldn’t have to rely on other nations when it comes to food and other things. My last example of how the Columbian Exchange helped European Domination was how because of all this wealth rose great towns and merchants who controlled great wealth. The economic revolution increased the wealth of European nations while the others stayed poor.

The pace of industrialization accelerated rapidly in Britain. By the 1800s, people could earn higher wages in factories than on farms and because of this more people could afford to heat their homes with coal from Wales and dine on Scottish beef. They wore better clothing which were woven on power looms in England’s industrial cities. Cities also had a lot of job seekers. Industrial cities started to rise because of the amount of factories and jobs opportunities. Most Europeans have lived in rural areas but because of this most people moved to the cities for jobs. Cities got more wealth because the amount of money they were making. Factories started to rise and people started to work and because of this they received more wealth which means they received more power. Industrialization had some great effects when it came to inventions. People started making great inventions like the loom and steam powered engines. This helped make even better inventions in the future. The Industrial Revolution impacted people lives . It impacted their lives in many ways like being able to wear clothes and eat food. Many of these things now affordable to them because of these factories. Even though the factories may have had bad working conditions and was unsafe they improved many things which made it better to work and overall live a good life. One of the greatest effects of the industrial revolution happened in the economy which turned out to be a success. This economy lead to great wealth which means it gave them great power. This meant that they could provide education and many other things that made people want to be part of the nation.

I think that the European Industrialization may have caused more harm than good but if they never would have caused that harm we probably wouldn’t have many of the things we have today. So overall I agree with the statement a little but I think that more great things came from this than bad.

My first example is going to be about the Caribbean. Columbus found founded this which made other people want to come and explore. If it wasn’t because of those people the Caribbean and Mexico and all the other places could be runned by Chinese or somebody. Even though they did kill and torture a lot of native Americans they did manage to obtain and conquered all that land. If it wasn’t for the Spaniards many of the south may still be runned by the Inca empire. They also got rid of the Aztec which could have also perhaps controlled some of the south today. The Spaniards also helped colonize the south which is good because we don’t want some people who believe in 10 gods and sacrifice to run the south. Overall the Spaniards helped make the south a better place by colonizing it and making it wealthy and powerful.

I’m gonna make my second example the Columbian exchange because of how good it impacted the world. The Columbian Exchange helped shape trade to what it is today. The exchange made it possible from goods to come it from many places around the planet. The exchange helped many merchants get rich which later evolved to investments and joint stock companies that helped shape many cites. The Columbian Exchange also brought a sort of new world of crops such as corn and potatoes. These two vegetables fed people and gave them all the possible nutrients. This lead to lots of farming which also shaped what is farming today. Overall the Columbian exchange did a lot of good thing to the economy and shaped how we use tarde today. Even though it made slavery, people later figured all that out and made it better.

The industrialization allowed nations to gain more wealth which was good because most nations were poor and were also in need of food, clothes, and houses. This wealth allowed many people to love a mediocre life which ended up being better than having no job and no food. Overall the Industrialization was a very good thing that made people’s lives better.

How Christopher Columbus Discovered the Caribbeans. (2021, Apr 19). Retrieved from https://papersowl.com/examples/how-christopher-columbus-discovered-the-caribbeans/