Christianity and the New World 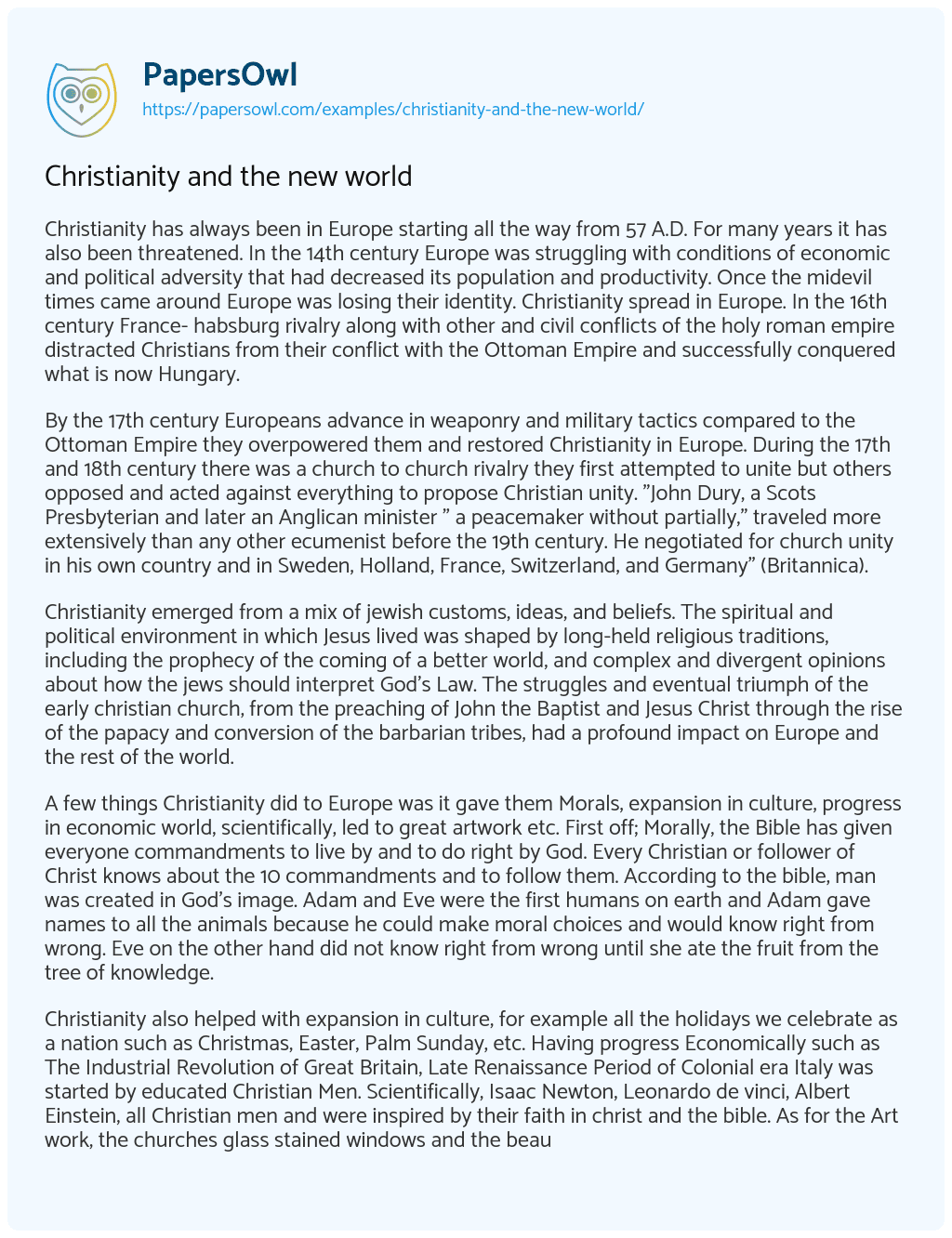 Christianity has always been in Europe starting all the way from 57 A.D. For many years it has also been threatened. In the 14th century Europe was struggling with conditions of economic and political adversity that had decreased its population and productivity. Once the midevil times came around Europe was losing their identity. Christianity spread in Europe. In the 16th century France- habsburg rivalry along with other and civil conflicts of the holy roman empire distracted Christians from their conflict with the Ottoman Empire and successfully conquered what is now Hungary.

By the 17th century Europeans advance in weaponry and military tactics compared to the Ottoman Empire they overpowered them and restored Christianity in Europe. During the 17th and 18th century there was a church to church rivalry they first attempted to unite but others opposed and acted against everything to propose Christian unity. “John Dury, a Scots Presbyterian and later an Anglican minister ” a peacemaker without partially,” traveled more extensively than any other ecumenist before the 19th century. He negotiated for church unity in his own country and in Sweden, Holland, France, Switzerland, and Germany” (Britannica).

Christianity emerged from a mix of jewish customs, ideas, and beliefs. The spiritual and political environment in which Jesus lived was shaped by long-held religious traditions, including the prophecy of the coming of a better world, and complex and divergent opinions about how the jews should interpret God’s Law. The struggles and eventual triumph of the early christian church, from the preaching of John the Baptist and Jesus Christ through the rise of the papacy and conversion of the barbarian tribes, had a profound impact on Europe and the rest of the world.

A few things Christianity did to Europe was it gave them Morals, expansion in culture, progress in economic world, scientifically, led to great artwork etc. First off; Morally, the Bible has given everyone commandments to live by and to do right by God. Every Christian or follower of Christ knows about the 10 commandments and to follow them. According to the bible, man was created in God’s image. Adam and Eve were the first humans on earth and Adam gave names to all the animals because he could make moral choices and would know right from wrong. Eve on the other hand did not know right from wrong until she ate the fruit from the tree of knowledge.

Christianity also helped with expansion in culture, for example all the holidays we celebrate as a nation such as Christmas, Easter, Palm Sunday, etc. Having progress Economically such as The Industrial Revolution of Great Britain, Late Renaissance Period of Colonial era Italy was started by educated Christian Men. Scientifically, Isaac Newton, Leonardo de vinci, Albert Einstein, all Christian men and were inspired by their faith in christ and the bible. As for the Art work, the churches glass stained windows and the beautiful pictures on them. Christianity created the Modern Global World and also Western Civilization, it also helped civilize the greeks and romans leading to a world more social and successful.

Christianity was split into the Eastern rite and Western rite. In Northern Europe the rulers supported Protestantism to get an upper hand and recede the church’s position. Greed was common and the Kings did not like the power the churches had. The result of this was the thirty year war in central Europe starting 1618-1648. It was the greatest and longest war in the modern period. It ended with the agreement that the local ruler could determine the branch of christianity for the kingdom.

“Lutheranism was popular in Northern Germany and Calvinism in Switzerland, Holland, scotland and parts of France” (Prof. M.Spector) . Martin Luther started talking about the Roman Catholic Church and disapproved of the teachings of the time. At the time Martin Luther was a monk the Roman Catholic Church taught that salvation should be paid in gifts. Martin Luther highly disputed these teachings of indulgences. On October 31st of 1517 which will be later known in this date as Reformation day and is also the date that is known as the start of the Reformation period .

This ninety five theses was sent to Albert of Brandenburg which was the Archbishop of Mainz. The ninety five theses started the reformation in the Catholic Church that did away with paying fees for forgiveness and eternal salvation, but how people should live their lives in the name of Jesus Christ . In this theses Martin Luther argued that paying for your sins would not punish you and how it would be easy to get rid of your sins that you have committed. He also argued that it would give away from giving to the poor and and performing other acts of mercy to repent your sins. Martin Luther’s teachings where that the Bible is the only source of divinity and opposed the pope. As Luther once said

“Anyone who is to find Christ must first find the church. How could anyone know where Christ is and what faith is in him unless he knew where his believers are?”

The people who followed Martin Luther’s teaching are known as Lutherans. Martin Luther also improved the German culture by printing a Bible that was in German not in Latin like its previous printings. In 1546 Martin Luther passed away of a stroke. The European branch of the christian movement was permanently split into two channels. There was many people with different views and beliefs. ” I cannot and will not recant anything, for to go against conscience is neither right nor safe. Here I stand, I can do no other, so help me God. Amen.”

Anti Semitism was practiced by The Catholics, Orthodoxs, and Protestants. This led to social discrimination and persecution with blood libels, expulsions, forced conversations and massacres. Jews were frequently massacred and exiled from various places in Europe. Many Christians including members of the clergy, who were in fact some of the main and formal leaders within certain religions. Centuries later Nazis would use these practices to kill off a whole religion, held the jewish responsible for killing Jesus.

The Black death devastated Europe in the mid-14th century, Jews were taken as scapegoats which according to the bible means a animal which is ritually burdened with the sins of others and driven away. ” and Aaron shall cast lots upon the two goats: one lot for the LORD, and the other lot for Azazel.” ( Leviticus 16:8) rumors were being spread they were causing the diseases. Therefore, leading to persecutions to many jews and jewish communities being destroyed.

Christopher Columbus went on a Voyage to have profound influence on the evolution of European civilization and the history of the Christian Church. Europe was in trouble.While traveling the Western Hemisphere Columobus thought it would be a great answer to Europe’s Problems. This new land had minerals and agricultural purpose, it would also be a great escape for the Europeans who want to get away from the social system.

In the New World everyone was accepted as self-evident a belief that civilization and the christian religion were one of the same. As Thomas Jefferson has once said

“We hold these truths to be self-evident: that all men are created equal; that they are endowed by their Creator with certain unalienable rights; that among these are life, liberty, and the pursuit of happiness.”

” People who followed Columbus left their crosses beside their flags and and claim the lands in the name of both their God and nation.” They desired to spread the Christian Gospel, but their main goal was to find the Three G’s which was Gold, God and Glory. The lust for gold was high, seeking god and getting the natives to convert to catholic christianity, as for glory was to get land and a lot of it to be successful. Novo Mondo Retrovato, ” New World Found” as Amerigo Vespucci says “Those new regions [America] which we found and explored with the fleet . . . we may rightly call a New World . . . a continent more densely peopled and abounding in animals than our Europe or Asia or Africa; and, in addition, a climate milder than in any other region known to us.”

The idea of natural political equality was already a part of English republican thought by that time, especially in the writings of John Locke. And the sense that all people are equal in the eyes of God was a pillar of Christianity. The sin of slavery in the New World, however, would corrupt both versions for more than a century and limit the “rights of life, liberty, and the pursuit of happiness” for many. America’s founders, of course, did not actually agree that all men were created equal. The boundaries of “liberty” were challenged, and “happiness” evoked actions that not everyone shared. The Christian egalitarian view holds that the Bible teaches the fundamental equality of people of all racial and ethnic mixes, all economic classes and all age groups, but within the teachings and example of Jesus Christ, God and the overarching principles of scripture.

Within the wide range of Christianity there are dissenting views to this from opposing groups, some of which are complementarians. There are man who say that the Bible encourages equality and also encourages law and order and social structure. For example, parents having authority over their children and husbands authority over their wives. These ideas are considered by some to be contrary to the ideals of egalitarianism.

When it came to religious belief, the vast majority of 18th-century Americans acknowledged inalienable rights “endowed by their Creator” and most of them understood their Creator through a Protestant lens. But the divisions within Protestantism were far starker than they are today. In fact, early in our country’s history, Protestant sects were quick to use the law to gain political advantage and shut down their religious opponents. Later, a Protestant majority that had placated many of its internal divisions used its political power to harangue and oppress Catholics, Mormons, Jehovah’s Witnesses, Christian Scientists and others.

Christianity and the new world. (2019, Oct 16). Retrieved from https://papersowl.com/examples/christianity-and-the-new-world/