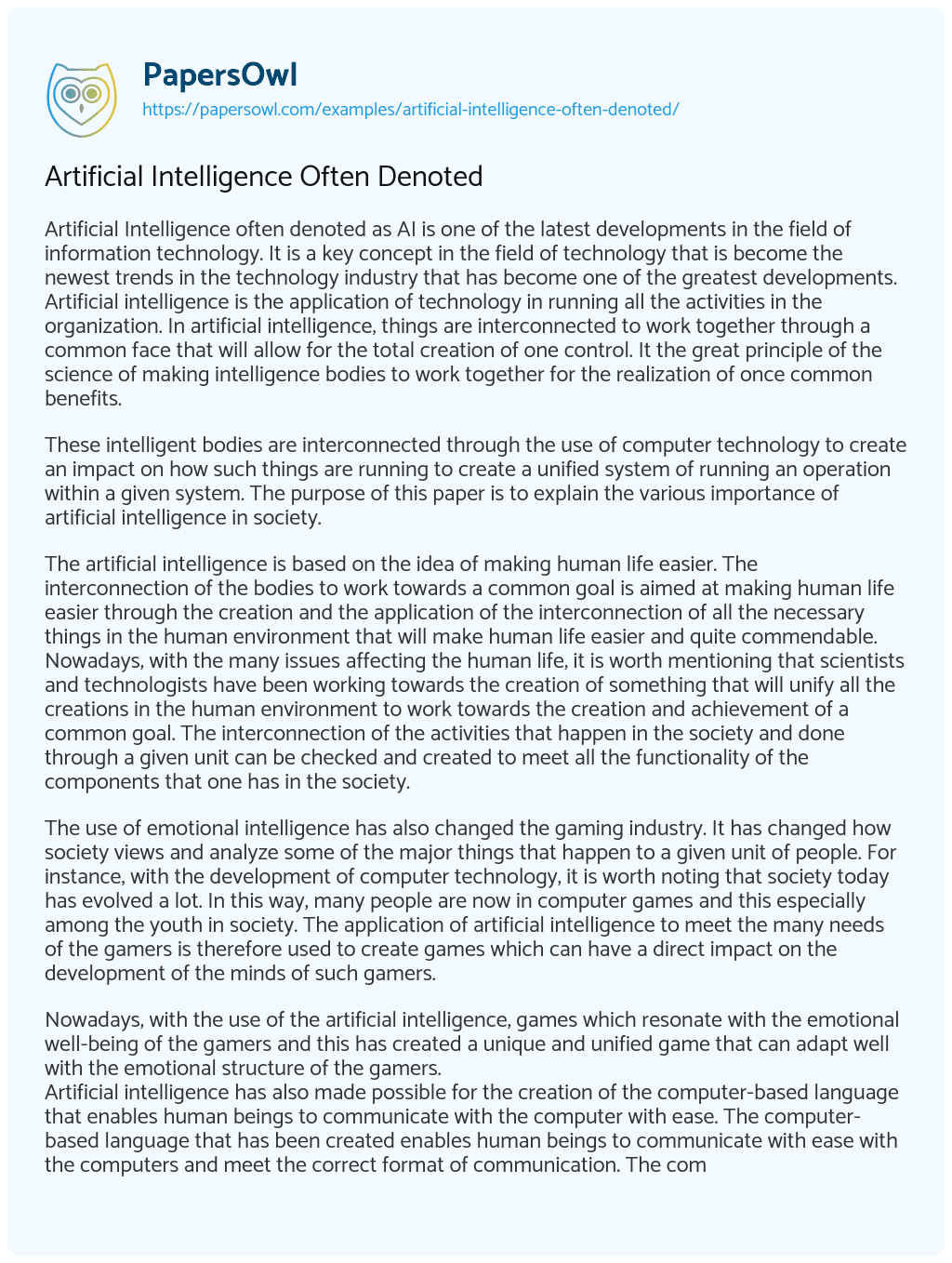 Artificial Intelligence often denoted as AI is one of the latest developments in the field of information technology. It is a key concept in the field of technology that is become the newest trends in the technology industry that has become one of the greatest developments. Artificial intelligence is the application of technology in running all the activities in the organization. In artificial intelligence, things are interconnected to work together through a common face that will allow for the total creation of one control. It the great principle of the science of making intelligence bodies to work together for the realization of once common benefits.

These intelligent bodies are interconnected through the use of computer technology to create an impact on how such things are running to create a unified system of running an operation within a given system. The purpose of this paper is to explain the various importance of artificial intelligence in society.

The use of emotional intelligence has also changed the gaming industry. It has changed how society views and analyze some of the major things that happen to a given unit of people. For instance, with the development of computer technology, it is worth noting that society today has evolved a lot. In this way, many people are now in computer games and this especially among the youth in society. The application of artificial intelligence to meet the many needs of the gamers is therefore used to create games which can have a direct impact on the development of the minds of such gamers.

The use of artificial intelligence has also made it possible for the intelligence officers and the forensic experts to key in and make the appropriate decision in nabbing of the key suspects in a crime related case. The development in technology has revolutionized the policing and security industry, and it has created the best method of dealing with cases in the society. The use of artificial intelligence has made it possible for voice recognition and also handwriting recognition services (Joshi 76). These are key things that can be applied in dealing and unmasking the many cases in the society. Forensic experts, for instance, have made it possible to deal with the issues that affect the world and cases that were quite hard to deal with in the past through the application of this methodology. It has helped in solving many sensitive cases (Joshi 99). Voice recognition can be used to put the suspects into boos through the analyzing of their voices.

The use of artificial intelligence is also the main idea behind the creation of the recent and most developed robots. Robots have created through the application of emotional intelligence to create and manufacture robots which are of high quality and can make some viable decisions just like human beings. In the present society, robots have become part of the human kingdom and have enabled for the effective running of many activities in the society (Muller 23). The creation and manufacturing of high tech and intelligent robots in the society that can accomplish the various tasks with ease are therefore the prime reason behind the successful technology applied in the robot industry. Robots which can be used in homes, industries and also the military world draw their significance and origin from the extensive field of artificial intelligence(Joshi 97).

The development of artificial intelligence is also the main reason behind the major developments in machine learning. Artificial intelligence has made it possible for the development of machine learning. Machine learning allows for the utilization and total fulfillment and understanding of the way through which machine operates. This has allowed for effective learning and making decisions that are for the goodness of the company that uses and applies machines in the industry. This has also helped in the creation and the development of era free machines that work perfectly well with ease, and it has helped in the creation of an error-free society where everything is done with precision (Joshi 104).

The banking and the insurance firms have also benefitted from the artificial intelligence system. The artificial intelligence in banks is applied through the mastership of technology to enhance the security of the banks by dealing with the massive irregularities and cases of fraud in banks. The use of artificial intelligence allows for the recognition of handwriting that enables the bank to deal and ensure that those withdrawing the money are the real customers (Muller 17). The AI also enables the customers to develop and create a personalized relationship with their customers and hence works towards the creation and meeting the needs of each customer with ease. This allows for the ease of service.