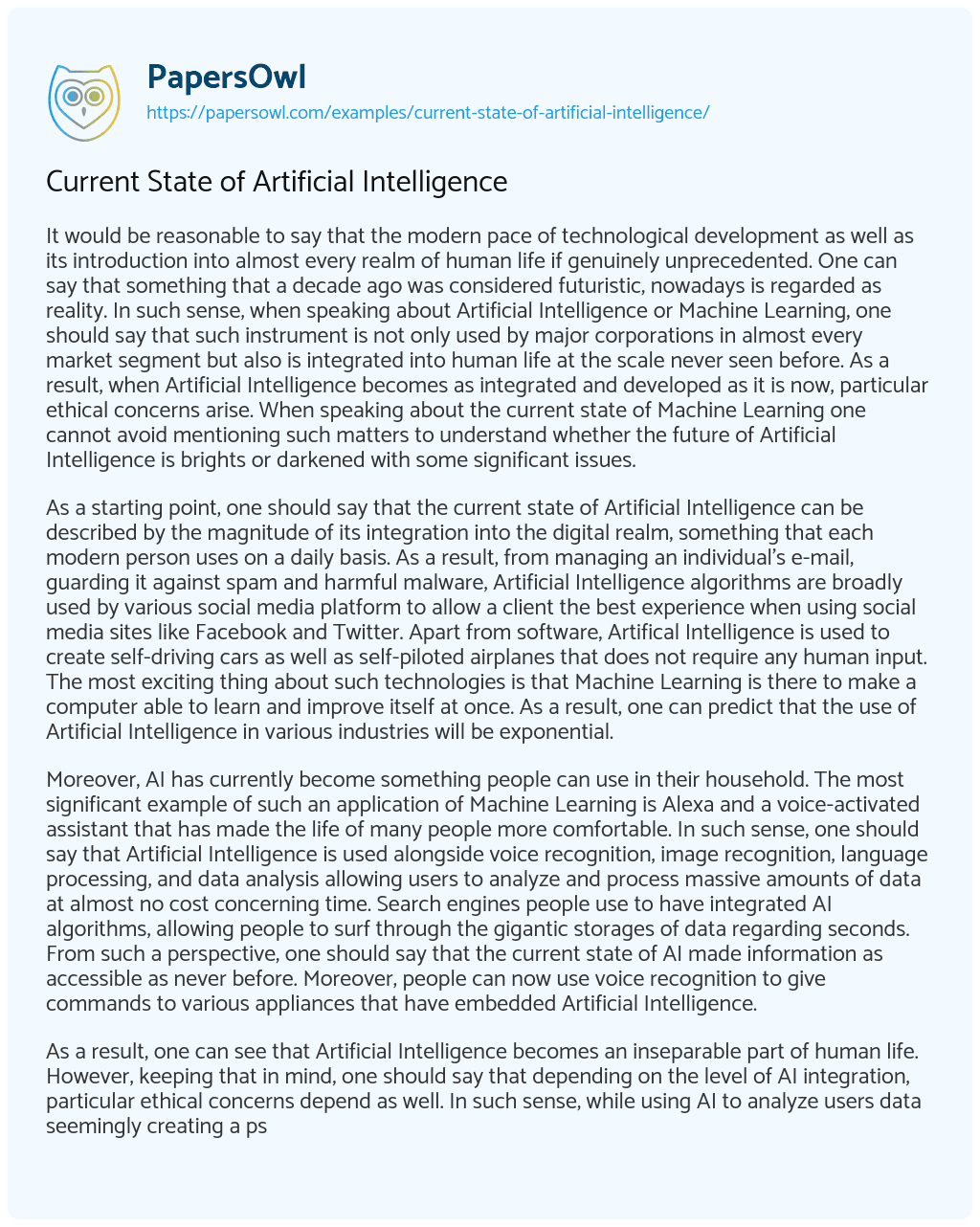 It would be reasonable to say that the modern pace of technological development as well as its introduction into almost every realm of human life if genuinely unprecedented. One can say that something that a decade ago was considered futuristic, nowadays is regarded as reality. In such sense, when speaking about Artificial Intelligence or Machine Learning, one should say that such instrument is not only used by major corporations in almost every market segment but also is integrated into human life at the scale never seen before. As a result, when Artificial Intelligence becomes as integrated and developed as it is now, particular ethical concerns arise. When speaking about the current state of Machine Learning one cannot avoid mentioning such matters to understand whether the future of Artificial Intelligence is brights or darkened with some significant issues.

As a starting point, one should say that the current state of Artificial Intelligence can be described by the magnitude of its integration into the digital realm, something that each modern person uses on a daily basis. As a result, from managing an individual’s e-mail, guarding it against spam and harmful malware, Artificial Intelligence algorithms are broadly used by various social media platform to allow a client the best experience when using social media sites like Facebook and Twitter. Apart from software, Artifical Intelligence is used to create self-driving cars as well as self-piloted airplanes that does not require any human input. The most exciting thing about such technologies is that Machine Learning is there to make a computer able to learn and improve itself at once. As a result, one can predict that the use of Artificial Intelligence in various industries will be exponential.

Moreover, AI has currently become something people can use in their household. The most significant example of such an application of Machine Learning is Alexa and a voice-activated assistant that has made the life of many people more comfortable. In such sense, one should say that Artificial Intelligence is used alongside voice recognition, image recognition, language processing, and data analysis allowing users to analyze and process massive amounts of data at almost no cost concerning time. Search engines people use to have integrated AI algorithms, allowing people to surf through the gigantic storages of data regarding seconds. From such a perspective, one should say that the current state of AI made information as accessible as never before. Moreover, people can now use voice recognition to give commands to various appliances that have embedded Artificial Intelligence.

As a result, one can see that Artificial Intelligence becomes an inseparable part of human life. However, keeping that in mind, one should say that depending on the level of AI integration, particular ethical concerns depend as well. In such sense, while using AI to analyze users data seemingly creating a psychological portrait of a potential client, many companies inadvertently invade a person’s privacy. As a result, even though such corporate actions are motivated by creating a better customer experience, violation of privacy of personal data is not only a series of ethical contravention but legal as well.

In such sense, the more AI is integrated into human life, and the more people should employ ways of protecting personal and sensitive data of an individual from breaching. Namely, because Machine Learning allows the colossal corporation to “get inside minds,” of people, the government is the instrument that should private sector regulated, making it less possible that a person’s private data will be used for the sake of corporations (Adobe).